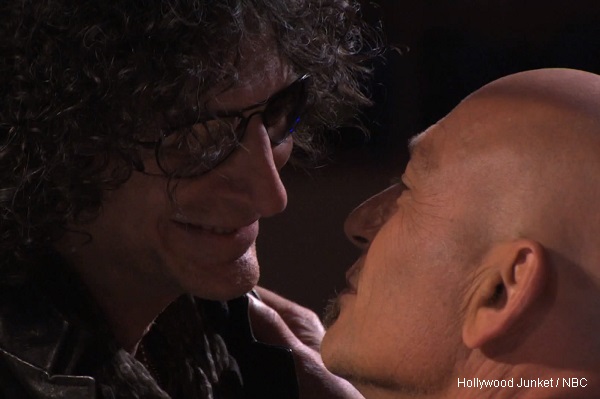 Three little boys with machetes and butter knives? Well what did the judges think about Ballet Folklorico Mestizo’s performance, Mel B couldn’t stop smiling, Howie Mandel declared them a star, Heidi Klum would love to see them again and Howard Stern said they were really great.

Watch the Aquanauts impress the judges with their special twist on synchronized swimming! Here

Howie Mandel described Kevin’s look and mannerisms as if Kevin was the result of Joe Cocker and Neil diamond giving birth to a grown man.

Watch Kevin Downey Jr.’s comedy bit and find out why judges Howard Stern and Howie Mandel loved him, but ended up mocking his stage presence. Here

Mel B thought the performance was graceful and smooth, however, this performance had a different effect on Howard a Howie resulting in a near kiss!

Mel B immediately recognized Timber from a show they had previously worked on together in Las Vegas and had to exclude her self from voting, however, Timber’s performance was so amazing that Mel said he was even a thousand times better then before. Howie Mandel said he could not notice a single flaw in the performance and Howard Stern said you have taken to a new level. Timber Brown earned a standing ovation from the audience for his amazing performance.

Watch Timber Brown do things on a pole that we’ve never seen a guy do before! Here

Howard Stern said America will fall in love with you, Heidi Klum thanked Skilyr for sharing her story and Howie Mandel said in some place your father hears your words… you inspired the whole nation today.

This performer happened to be Howard Stern’s very “personal doctor” so Howard had to exclude himself from voting. Mel B did not get the doctor’s humor saying he was not funny, and Howie said that while the doctor’s act may be likeable and fun it’s just not a million dollar act.

Mel B absolutely hated it!

Howard Stern said this is the stupidest thing ever!

Watch how “Jesus B-Ball” gets Howard Stern up on stage to shoot a free throw basket. Here

Watch how “Secrete Emotion’s” poetry gets Nick Cannon going and grinding on her! Here

Howard Stern said I thought you were really good. Mel B gushed about Milton’s amazing unique voice saying I see a superstar inside you. Howie Mandel described Milton as a diamond in the ruff.

A super fan gets her chance today singing for Howard Stern as he joins her on stage for a very special performance that Mel B said words can’t describe what I saw and Howie Mandel not knowing what to say.