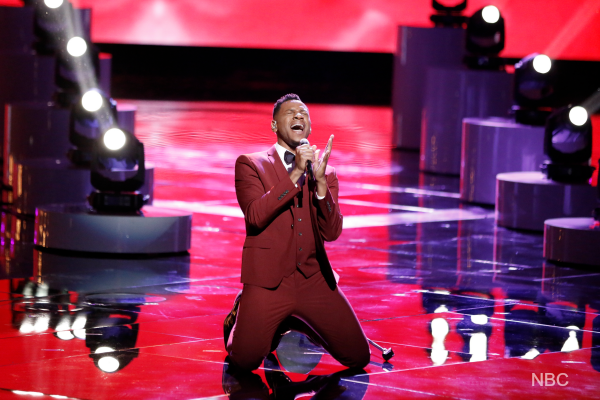 There was a lot of loving on “The Voice” Top 11 perform week. Artists Mark Isaiah (Team Adam), who was voted out of the bottom two last week, performed “How to Love” by Lil Wayne. Team Alicia’s Chris Blue sealed the last performance of the night with “When a Man Loves a Woman by Percy Sledge.

STEPHANIE RICE (Team Alicia) – sang “Behind Blue Eyes” by The Who 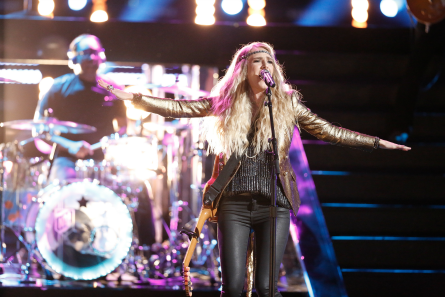 TSOUL (Team Blake) – sang “Lay Me Down” by Sam Smith 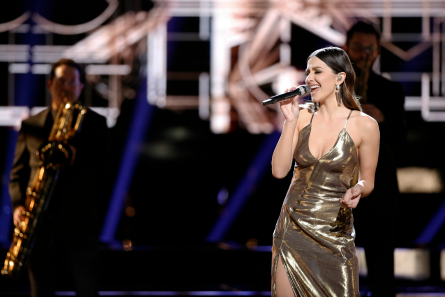 Lilli performed a lack-luster “Town Without Pity” by Gene Pitney. Alicia said she was “so feeling it,” and loved that Lilli was able to transform into something powerful and lost herself in her own world. Coach Adam said it took so long to “crack the code” and felt that they were all transported to a different era with Lilli’s performance. Adam was happy that they “found her lane.”

Gwen called Hunter a “creative musician”. Hunter selected “All I Want” song
by Kodaline. Gwen’s goal with Hunter’s performance was to make it dramatic. Hunter was to play the drums. Adam called his performance “so great!” He added that there’s a a lot of ways to be a great singer. But, there’s no mistaken of Hunter’s voice which is what makes him special. Gwen said she learned a lot from Adam who fights for his team. She fought for Hunter by telling viewers he is “the real deal” and there’s been nobody like Hunter on the show. 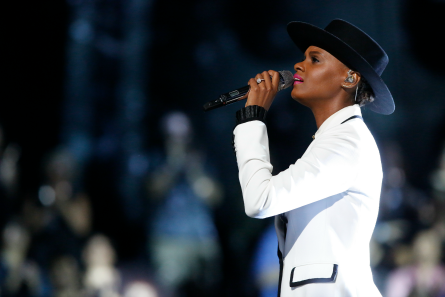 Vanessa said she internalizes her feelings. She sang “Diamonds” by Rihanna. Adam said he loves Vanessa’s vibe and she has “badass style”. He said she stands alone because she knows herself and he’s a “huge fan.” Blake teased with the push of his button “this doesn’t work now?” He said he wants her on his team. Blake added that she is the one he is the most intimidated by. Coach Alicia said Vanessa sings so effortless with complicity, and power – the way she owns that is so refreshing. Alicia said the song was a message to Vanessa that she is a diamond.

Lauren was excited that Lee Ann Womack tweeted at her after her performance in the Top 12 last week. Lauren chose to sing “Somewhere in My Broken Heart” by Billy Dean. Blake said it was a good opportunity to show off Lauren’s voice. Lauren said she can’t write a happy song to save her life. Blake made her tear-up after he told her she’s his favorite singer on the show. Adam told Lauren that she’s going to be in the finale. “You just have what it takes”. Coach Blake said Lauren is “special and different.” Her voice doesn’t sound like anyone else. He called her “important to Country music” after begging viewers to vote for her.

Mark was in the bottom two last week. So, Mark stepped-up his game by singing “How to Love” by Lil Wayne. Adam said it’s a rhythmic shift which is challenging. Adam told Mark that he needs to learn it so well that it needs to be second nature to him. It’s rapping almost because there’s so many words. Gwen was in awe of watching Mark “make his truth” – everything he’s been working for. Adam said it was a tough song, and Mark has chosen every song which Adam has trusted. He said he’s never done that with a contestant. Mark “constantly surprises” Adam. 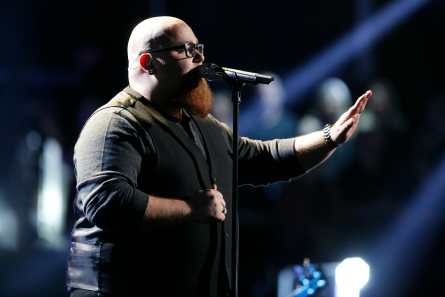 Jesse sang “Human” by Rag’n’Bone Man which is currently Adam’s favorite song. Jesse said Adam has been pushing him out of his comfort zone. Alicia reacted that she loved how they arranged the song and that Jesse took it to a whole new place. She said his style is only his. Coach Adam said he is so proud. Jesse is not a pop star and “The Voice” season 11 winner Sundance Head wasn’t a pop star. He said Jesse reminds him of Sundance and they both sing their face off and don’t care.

Brennley was super-excited to have gotten a tweet from Kristin Chenoweth last week and her song made it to number 7 on the iTunes chart. Brennley sang “River” by Joni Mitchell. Brennley’s mom was in the audience this week. Adam said it was so cool to hear her sing a Joni Mitchell song which is “outside of the box” and it was beautiful (Adam was directing the comment to Blake). Gwen said there is no way that Brennley is 15 and can channel a Joni Mitchell song that is so deep. 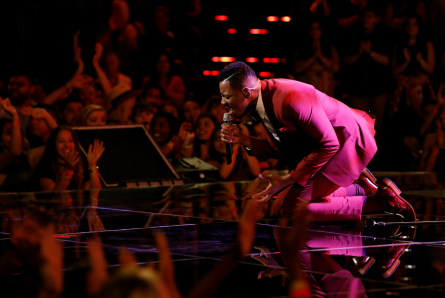 Last week the audience couldn’t stop cheering for Chris after his Top 12 performance. Chris chose to sing “When a Man Loves a Woman” by Percy Sledge this week. Alicia told Chris that he has a lot of soul searching this week to “uncover some layers of himself” and “show America how magnificent his voice really is.” His fiance was in the audience. Alicia said she and everyone is blessed with Chris’ performances and compared him to Marvin Gaye, Nat King Cole, etc.. “One of the greats!”

Team Adam’s Mark Isaiah found himself in the bottom two for the third week in a row. Last week Mark was up against Team Gwen’s Troy Ramey. This week, it was Stephanie Rice from Team Alicia that joined him. The two artists were at the mercy of receiving the most popular tweet votes from America’s “Instant Save” vote.

Stephanie’s Save Song was “Issues” by Julia Michaels. Alicia called Stephanie special and proud of her for being her own artist who writes her own songs.

Mark’s Save Song was “7 Years”. Adam called Mark “a fighter” because he’s had his back up against the wall three weeks in a row. Adam also commended Mark for being up on stage with a smile on his face. Adam also reminded everyone that Mark has chosen his songs every time. He said “that’s what an artist is.”

After the commercial break, the voting polls showed Mark winning 59% of America’s votes versus Stephnie’s 41%. Stephanie told Alicia that she enables her and “no one can take away what you’ve given me.”

Mark told Adam “you’re awesome. I’m so happy to be here. I’ve learned so much, dancing on stage, meeting everyone. I’m so blessed to be here.”

Alicia thanked Stephine for being vulnerable and for being a true artist. Alicia also added that Stephanie represents them. When people feel unloved, we can still pull through. Alicia encouraged her with “no matter what, you’ve won, you’ve won already.” Alicia finished with that she’s excited and grateful for Stephanie who has shown artists how it goes to tell her truth.

Adam said to Mark – “I want to do my best work for this guy” Imagine what it’s like to be saved because its a save for me to because I get to do another week with you. Adam also stated that it’s an amazing projectory because Mark has gotten further than Adam did at his age.