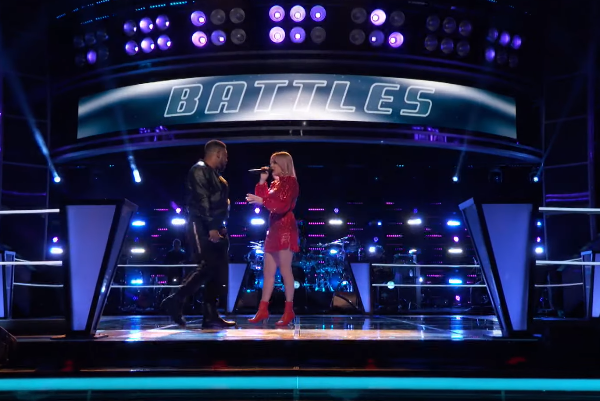 “The Voice” coaches continued in their second week of season 16 Battles with the help of their super-talented advisors who included: Grammy Award nominated Charlie Puth on Team Adam, Country singer/songwriter, and former Comeback Stage coach – Kelsea Ballerini for Team Kelly; best selling country duo of all time- Brooks and Dunn on Team Blake; five- time grammy award nominee Khalid on Team Legend. The artists are put to the test with some intense Battles.  One of the best parts of the night was when LB vs. Ciera Dumes of Team Adam had to rehearse a Charlie Puth song IN FRONT of Charlie Puth! Blake called putting them together a “huge mistake.” Stay tuned for a new round on “The Voice” called the Live Cross Battles.

Adam said they have the opposite voices.  Karly’s mom was in a rock band growing-up and she wanted to be like her.   Celia grew-up in New York city with a photographer and fashion designer as parents.  Celia goes to a performing arts high school, and “The Voice” has changed the course of her Senior year.  Adam gave them “Friends” song.  He said it fits them perfectly – power for Celia, and grace and simplicity that’s good for Karly.  Charlie Puth stated that Karly’s voice reminds him of Ellie Goulding, and  Celia has an Indie voice that still crosses-over to Pop.  Adam said the contrast of their styles musically lends the back-and-forth of the performance.  Puth advised them not to harmonize too much.  Karly said she was nervous about the Battle since Celia got a four-chair-turn in her Blind Audition.  Celia said she does NOT feel an advantage to her four-chair-turn.

Blake said they haven’t seen more two different singers, and  it’s clear that Celia loves “Florence and the Machine,” but make sure she’s also doing her own thing and it didn’t take away from her “holy crapness” (a new Blake word). Blake said Karly displayed her own holy crapness because he didn’t expect that from her and she stepped-up to the plate.  Kelly reacted that Celia had a cool presence with an Urban Florence.  She said Karly’s presence is what made that Battle.  John said they executed it with such skill and he got out of his head.  Adam said they’re both “world-class.”  But, the surprise and shocker was Karly. He called Celia “egnimatic.” Adam said the “right thing” would be to have them both.  He chose Celia as the winner because she has the whole thing and there’s something special about her.
Battle Winner: Celia

STEAL – Blake stole Karly.  He said Karly has something about her voice, he just loves it and there’s no one like her in the competition.  Adam reacted that Blake is “awesome.”   This greatly confused Blake who said he’ll proceed with caution, hinting that Adam may be up to something.

John blocked Adam from Julian during the Blinds.  Julian was performing six nights a week in China before “The Voice.”   The last time Denton was on “The Voice” he proposed to his girlfriend after his Blind Audition.  John gave them “Grenade” song by Bruno Mars.  He said they can do R&B and Pop.  Khalid said Julian’s tone is “the money” and loves Denton’s personality and is connected to the “rawness” of his voice.  Khalid advised them to put more emotion into the performance.  John agreed and said they need to make people “feel that pain.”  Khalid said the Battle comes down to the one that evokes the most emotion, “I want tears.”  John said he likes how they ended the song with so much passion and emotion.  He added that Julian is “really tender and vunerable” and Denton is the more powerful voice.  He said it will come down to who wins the day.

Adam called the Battle “really, really even” and was tough to call it.  Blake said the moment that separated the two was that long run Julian did, and would push the win over towards Julian.  Kelly said it’s really hard to do runs like that, but also didn’t pick a winner. John said he loved it when they did their runs together and deciding is hard because they both belong on the show.  John said he chose the winner based on his range, tone, and interesting choices he makes – he chose Julian.
Battle Winner: Julian.  John said Julian’s voice is “exciting” and he has a great opportunity to do well.

Presley is 16-years-old and Rizzi is 29.  She thanked Kelly for putting her up against a “16-year-old uper model!”   Presley called “The Voice” Blind Auditions “surreal” because her first audition song he sang for a talent show was Kelly Clarkson’s “Because of You” and Kelly was the first to turn her chair.  Kelly gave them “Whataya Want from Me” by Adam Lambert.  It’s a big song that Kelly felt only Rizzi and Presley could handle it.  Kelsea noticed that Presley has a contained personality that only comes out when she sings.   She advised them to look at each other and “get mad.”  Kelly advised them that sometimes “it’s okay to sing it straight” and told them to “reign it in.”  She said the two women are like sisters and want each other to do well.  Kelsea said it will come down to who has the most angst, and who’s going to mean it in their performance.

John called them “outstanding” and both seem like they belong on stage.  He pointed-out that Kelly Blocked him from Rizzi and loved her confidence.  But, because of the high notes at the end from Presley, he chose her.  Adam went with Rizzi because she showed she’s “really ready to do this right now.”  Blake said every time Rizzi delivered something with power and conviction, Presley would one-up her.  He went with Presley.  Kelly had no idea who to chose.  She said they both have an incredible range and regretted putting them together.  Kelly chose Presley.
Battle Winner:  Presley.  Kelly said Rizzi is seasoned, but the growth that Presley has shown is “insane” and wants to see what else she has to offer.

Blake said Dalton has a range that’s “a little bit shocking,”  and Dexter has a believability that’s hard not to fall in love when he sings.   Dexter, from Birmingham, Alabama, overcame Rocky Moutain Tick Fever.  He got a four-chair-turn.  Dalton supports his family by working at a chicken plant in Georgia.  Blake gave them “Hurricane” by Luke Combs.  Brooks & Dunn advised Dexter not to back away from the microphone when singing.   Blake said Dexter and Dalton are both so current and thinks they could be on the radio now.

Kelly loved Dalton’s rasp and said she “might” give it to Dexter.  John said he tends to like Dextor’s voice better, but Dalton shows more skill, and it’s a tough decision.  Adam said the way they put the song together was great and “was never a dull moment.”  More experience from Dalton. But Dexter was “technically more there.”  Blake said this moment “sucks” for him.   Blake chose Dexter.
BATTLE WINNER: Dexter. Blake said Dalton has a bigger range “but he hasn’t mastered control yet.”  Blake said he can’t wait to see what Country songs to give to Dexter to sing.

Charlie did a little bit of b-boxing which is on one of his  tracks. Adam said LB has a Marvin Gaye tone.  LB had a four-chair-turn during his Blinds and called the experience humbling.  He chose Adam because Adam started coaching during the Blinds.  Adam gave them a Charlie Puth song “Done For Me.”  Charlie said he wrote the song based off of a text conversation.  Charlie told them to make it their own.  Adam said it’s a hard song to do and  they were nervous because Charlie was right there, but their voices “are very rich together” and compliment each other well.  They had trouble with a harmony that Charlie has in the song.  Charlie told them they are free to do whatever with his song and loved that they truly made it their own.  LB saw it as an advantage to have Charlie’s input.

Blake called putting them together “what a HUGE mistake” it was.  Blake said LB sang the “crap” out of the song and Ciera had stage presence, confidence and loved that her voice shredded apart on the higher notes.  Blake wished Adam luck.  Kelly said Ciera was the surprise for her and called her passionate and sexy. She also called her “rad.”  John said he turned for both of them.  He compared LB to some of the gospel singers her grew-up listening to and chose LB.  Adam said they both did a beautiful job.  He chose LB as the Battle winner.
BATTLE WINNER:  LB .  Adam said he likes LB’s energy and voice even though it was a tough choice.

COMEBACK STAGE: Ciera was chosen to join the Comeback Stage.  Coach Bebe Rexha said her voice is like a Pop voice, yet smooth.

Blake said it makes no sense why Kim (30-years-old), and Kendra (19-years-old) chose him.  He put them together because they fill the same space as artists and wants to see which one will move forward.  Kim said rapping makes her feel strong.  Kim showcased her rapping during her Blind Audition.  Blake gave them “Here” song because it’s a good mix of rap and singing and pocket which they are both comfortable singing.  Kim said she’s “precusive” while Kendra is very smooth.  Brooks & Dunn said they both have the same power structure in their singing.  Blake said they have similar instincts in pocket.  Blake added that Kim has a confidence and fearlessness where there’s a sweetness and powerfulness in Kendra’s voice.   During rehearsal, Blake called them “magical” together.

Kelly reacted that Kendra was more powerful than what she remembered.  She said the song was more catered to Kim’s vibe and leaned more to her.  John called it a tough one and called it  a “flawless performance.”  Adam said Kim has more power volume wise.  Blake told the other coaches, “imagine, me and Brooks & Dunn trying to coach these two.”  He told Kendra and Kim that they have to be talented to do that song right and add the passion that the two have.  “Very few people on Earth have ever performed on something like this (The Voice).”  Blake based his decision on a gut feeling and went with Kim.

STEAL – Adam and John both pushed their buttons to Steal Kendra.  Adam told Kendra that the whole time she was performing he thinks she’s the winner.  He told her she did the performance with consistency and power.  John said he wants her on his team and she’d be one of the best singers on his team.  Adam said he doesn’t have a lot of females on his team and thinks she would thrive.  Kendra chose Adam.

At the end of this episode, the show announced a “twist” in two weeks that no one will see coming.