Crushing It and Parting Hair on THE VOICE Final Knockouts Recap 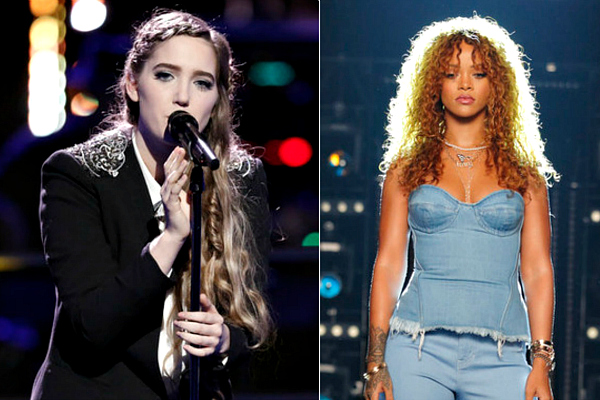 “The Voice” finished out the Battle Rounds in two weeks, moving on to the next round, The Knockouts which re-sets the coaches steal clock back to now one steal each instead of two.

The Key adviser in this round who advises ALL of teams is Rihanna. She said she’s a fan of “The Voice” and she loves to give back. In the Knockout rounds, contestants pick their own songs. They have no idea who they’ll be singing against until they step onto the stage. Each coach has the chance to steal another coaches artist at the end of each Knockout.

The first team up of the night is Team Adam. Adam said Rihanna is so unique and spiritual.

Adam said Blaine speaks to “off the beaten path” is why he paired him against Andi & Alex. During rehearsal, Adam advised Andi & Alex to face away from each other. Rihanna pointed-out that they aren’t talking about the same boy (in the song). So it makes sense that they start separately then come together. Rihanna said she loves Blaine and “he’s sick”.

Blake said Andi has a beautiful voice with “a lot of volume” and their downfall is NOT choosing a more dynamic song like Blaine. Pharrell basically agreed. He said the moment that Blaine had on-stage during this round is what every artist should have – to showcase his talent. Gwen said Blaine has a unique song. Adam credited himself for picking-up on Blaine’s potential early on. “Blaine’s voice is as strong as his presence, and that’s a big deal” Adam said.

Rihanna advised Braiden if his voice cracks, to own the note and that it will make his voice have character. In the meantime, Rihanna and Gwen discussed slicking Braiden’s hair back.

Braiden sang “Feeling Good” by Nina Simone. Ellie chose to sing “Cool For the Summer” song by Demi Lovato. Adam joked that Blaine’s performance was like a Bar Mitzvah. “See you later puberty” and he was impressed by the “massive bounds” he’s taken. Pharrell said it was hard for Ellie to recover after her voice mishap. Blake said Ellie is right up Gwen’s alley. He said Braiden has had such a big change in a small amount of time. Pharrell commended Ellie for trying and “fighting” up there. Gwen emphasized that they both did a great job and choosing the right song is so important. Gwen chose Braiden as the winner.

Pharrell said Bind Joe took the song to different heights and Barrett takes people on emotional excursion and there’s something “supernatural” about that. Gwen said it’s so clear who Barrett is and he does it so naturally. Adam noted the same thing, that Barrett seemed like a well-established artist. He also complimented Blind Joe for doing amazing. Blake was surprised that he had no idea that Blind Joe was nervous. Blake said Barrett should feel as equally intimidated by Blind Joe. Barrett responded that the does. Blake based his decision on who “sang the best”. It was Barrett. Blake chose Barrett because he’s more polished and can sing any genre he wants to.

Pharrell said he placed them together because their voices are both delicate and have a lot of power.

Madi picked “A Case of You” Joni Mitchell song. When she sang it, Riahnna said she heard two different artists in her voice and that blew her and Pharrell away in rehearsals. Pharrell called her an artist and NOT just a contestant. Amy chose “A Sunday Kind of Love” by Etta James. Riahnna helped Amy to act more sexy and be more confident in her presence and singing.

Gwen said she was mesmerized by Madi and watching both of them was “like Disneyland”. Adam noticed evident growth in Madi and there’s something about what Amy does that is “impossible to duplicate.” Blake said he’s a fan of Amy’s, but Madi snuck-up on him and he wanted to take a bubble bath. Pharrell said there’s something magical about where the spirit takes a song, and Amy is “magical”. Pharrell’s difficult position left him feeling like they both won. The winner he chose was Madi. Pharrell said “you can call her a Pop artist because what she does will be popular.”

THE STEAL!
Both Adam and Blake pushed their buttons to steal Amy. Blake sweet-talked Amy that she’s his favorite artist on the show “ever”, and can’t wrap his head around going with Sinead O’Connor (Adam Levine). Adam argued that he does believe that Amy can win.

Blake asked Ivonne is she got 200 times better than she was in Blind Auditions. Rihanna told Ivonne that her bravado is “sick”. Blake flirted with Rihanna that the gossip magazine will call the two of them “Bliahnna”, though he had also considered “Rake”. Chance sang “Demons” by Imagine Dragons. Ivonne sang Katy Perry’s song “Part of Me”.

Pharrell congratulated Ivonne on her “sky-high” confidence and Chance’s great performance. Gwen couldn’t hear all of Chance’s vocals in that song. She said Ivonne had great harmony. Adam was also not impressed by Chance, stating that strategically it was tool low. But, told him to keep being “a great guy”. Adam complimented Ivonne on blossoming. Coach Blake told Chance his song choice was interesting. The winner was Ivonne.

Adam said he put them together because of their strong personas and they have canon voices! Jordan chose to sing “Set Fire to the Rain” by Adele. He said the song talks about that journey in finding your happy place again, and it’s deep. Viktor picked “If I Ain’t Got You” by Alicia Keys. Viktor didn’t know that Adam has already covered the same song.

Blake reacted like most of us did -“damn!” He told Viktor that he wasn’t expecting for him to “knock it out of the building” and there’s only one thing wrong – that he’s up against Jordan and has one of the best vocals ever. Pharrell said Viktor shifted gears and took it to the next level. Gwen responded to their Knockout that Jordan is a “freak of nature” and Viktor has it all. Gwen pegged Jordan’s performance emotional and technical. Coach Adam saw that Viktor came through and “conquered all”. Jordan, whom they refer to as “the unicorn” provides the rare experience of hearing him sing. Adam was affected by his vocal. The winner was Jordan. Adam said Jordan commands your attention so much that it’s hard not to be swept-away.

Gwen paired the two young women together because she said they’re great story-tellers and both have something unique about them. When Korin saw that Rihanna is the Key Adviser, she was extremely excited and described her as “glitter in human form!”

Adam called what Summer put out on stage “serious spunk” It’s like Summer was outside and Korin was inside and it was just as great. He’d go with Korin. Blake said Korin “vocally it’s just as expressive as what Summer is doing working the stage.” Adam added that “Summer is like a human fire-cracker. Pharrell told Korin that it didn’t require for her body to do much, but it just require for you voice to continue to deliver”. Pharrell agreed that Summer is a fire-cracker. Gwen said she was shocked by what she saw from Summer and that she was like a hip-hop artist with punk attitude with a weird twist of girl power. There was something in Korin that she connect to. Gwen said she can do the most good right now with Korin. Gwen observed that Korin is busting out of her cocoon.

First up was Adam’s steal from Team Blake, Dustin who has an MBA degree, but all he wants to do is sing! Dustin chose “Free” by Zac Brown Band. Rihanna’s advice to Dustin was to let the people know that “Bam, the party’s about to start!” Keith just found out his wife is expecting another child and has this new motivation to win his Knockout Round. “I Want To Know What Love Is” by Foreigner.

Dustin has a “warm sound” but Keith’s song allowed for him to go for “big notes.” Pharrell called Dustin a great communicator, but Keith displayed that he was more of a fighter. Gwen said Dustin’s voice is soothing and is incredible. She complimented Keith’s personality. Coach Adam said Dustin was being free and Keith extended his notes, both of which was advised. Adam noted that they both showed growth. It was a tough pick for Adam. He chose Kieth.

Darius self-funded his own album and wants to be an artist and a producer like Pharrell. Darius picked “On Broadway” to show off every part of his voice. Pharrell said Darius’ fearlessness is unique. Morgan, who Pharrell stole from Blake and his first Country artist picked “Even If it Breaks Your Heart” song by Eli Young Band. Pharrell told Morgan that her talent is her personality.

Morgan got a standing ovation from the coaches by the end of her performance. Gwen said everything about Darius is amazing and she’s going to stalk him. Gwen told Morgan she believed her when she looked up to the sky. Adam reacted to their performances by telling Darius he’s the most ridiculous vocal mechanic he’s ever heard in his life, then heard Morgan and thought he’d steal her. Blake said everyone in the Knockouts is stepping-it-up. Coach Pharrell called Darius’ voice like a baritone sax and his performance was like watching a guy share his melodic ambitions with the world. With Morgan she showed that this is her opportunity and she doesn’t want to go home. Pharrell called both of them phenomenal. He chose the winner to be Darius. Pharrell picked Darius because he has an incredible “note intuition”, incredible range and called him “an inspirational artist.” Blake pushed his button to steal Morgan back on his team, and no one challenged him.