From the directing and writing team of Saw comes a long-awaited project in the haunted house genre, Insidious.

The producers of Paranormal Activity teamed with Saw director James Wan and writer Leigh Whannell, to create Insidious, an idea the creative collaborators had years before making Saw. “We’ve been fans of haunted house films, the scariest of horror genre films. When the guys from Paranormal Activity asked us to do it, we drew from ideas that we had in the past”, explained Whannell, as well as using friends’ ghost stories. 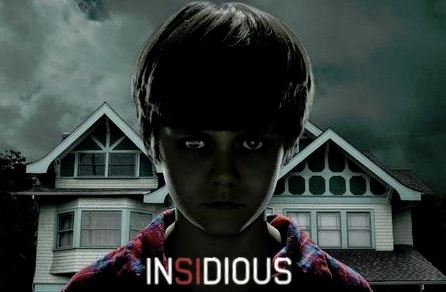 Insidious is an accomplishment of a film that brings back the old-style of haunted house films that include such classics: Poltergeist, Psycho, The Amityville Horror, along with undertones from Paranormal Activity 1 and 2. Wan included a cameo of the “Billy Doll” from the SAW franchise by drawing a cartoon version on a chalk-board in the classroom used in the movie.

After highly stylized film credits with a montage of haunting images open Insidious, audiences are introduced to a family of five who has recently moved into an older home. Suspicious noises in the house are chalked-up to the normal creaks that an older home makes. It’s not long before the mother (Rose Byrne) and son Dalton (Ty Simpkins) start noticing things out of place, voices and entities running amuck inside the house.

A mysterious encounter places Dalton in a “coma” which turns out not to be a coma at all. When the father (Patrick Wilson) learns the possibilities of what his son is experiencing, he rejects the theory until he himself is pulled into the darkness his son is facing and is made aware of his own past that is tied-in with Dalton’s.

“Insidious” by definition means to harm in a stealthy or inconspicious way with grave effect, is not about the haunting of a house, but it’s about the spirits that invade the family’s lives even after they’ve moved into a second home. Creators of the film stated that they hate “fake scares” and that’s not what they wanted to do with this film. “We wanted to make it like a traditional haunted house film”. Wan said that he pulled inspiration from old black-and-white horror film “Carnival of Souls” which he based some of the ghosts look.

Insidious pays homage to the old-style haunted house movies and possession films by using a cold look. It was shot digitally in 4K on a Red camera. The use of shadows and light was borrowed nicely from horror classics!

Other film influences in Insidious seem to be taken from A Nightmare on Elm Street with some silmlarities between the demon and Freddy Krueger, as well as The Entity, who’s star, Barbara Hershey plays Patrick Wilson’s mother in this film

Some notable scenes and comic relief come from ghost hunters in the film. Writer Leigh Wannell portrays one of them. The head of their team is a medium, Elise (Lin Shaye). Shaye’s horror film past includes A Nightmare on Elm Street.

Whannell stated that their ghost hunting research for Insidious had them talking to a medium and joining a female amateur ghost hunter to the infamously haunted Linda Vista Hospital in Boyle Heights, Ca at 1:00 am. “I wanted to see a ghost and I thought that if I am going to see one, it should happen now.”

No such luck in that department. However, with Insidious Whannell and Wan can count on another successful horror film to add to their credits.