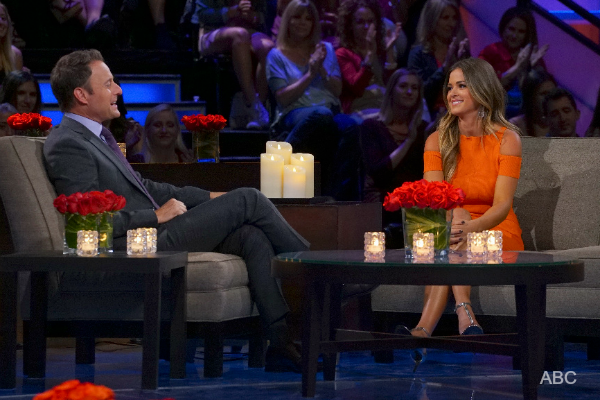 The end of “The Bachelorette” season 12 is here, and it’s the fan favorite “The Men Tell All” episode where all of the men who were sent away by their Bachelorette Joelle (Jojo) Fletcher finally get some answers and maybe even some closure.

Host Chris Harrison corralled the men into the studio where he asked upon many of them to share there thoughts and shared experiences on the show. A couple of the stand-out highlights included the solo entrance of the most volatile villain of “The Bachelorette” franchise yet, Chad Johnson, and a love campaign for Vinny by his mom sitting in the audience.

To escalate “The Bachelorette” drama this season amongst the men, producers decided to NOT have Chad sit in the same pool with the other men, but DID give him his own trailer, then had him enter the stage separately from the rest of the men to be interviewed by Harrison. Chad went on about all of the same things he talked about on the show. That when there are no other options left to a resolution, threaten to beat people up. 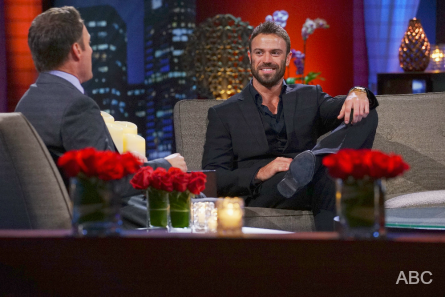 The most interesting thing that came out of his interview was when Harrison replayed the footage of his scuffle with Evan. He had the tape slowed down, and a mass agreement by the studio audience was that Evan indeed did push Chad which caused Chad to grab him and rip his shirt.

Later, after Jojo came out, a family guest – Vinny’s mom that is, stood up and spoke to Jojo about how big of a mistake she made by not choosing her son. Jojo handled this well and her reasoning for sending Vinny home was because her and Vinny had entered the “friend zone”, therefore, naturally excluding him from the suitor category.

Two of the men who were in the final four – Luke and Chase, came out to be interviewed by Harrison. 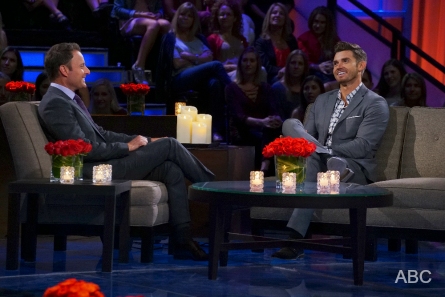 After Luke got sent home by Jojo, he said “it hit me like a train. I didn’t see an end to it at all.” Luke said maybe if he expressed that he loved her earlier, maybe things would be different. He thinks the problem was that he “held back.” Luke said he wanted to see that she was comfortable with his family then he could open up more. “I’m a hopeless romantic and wanted to say “I love you” and look back and say remember the first time he told her he loves her. Unfortunately, that was a dream that came to an end on Monday’s episode.

Luke stated that Jojo allowed his heart to open back up. “I was feeling like I was having an anxiety attack a week after that.” He said it took a while to get over the pain from being dumped by Jojo.

What Luke learned from “The Bachelorette” experience he said is, “I got to a place where I’m happy. I’m ready. I know the right person is out there. I’m going to let her know that first chance I get.” Luke also told Chris Harrison that he is ready to love again.

A bigger surprise ending to a Fantasy Suite date ever, was when Jojo sent Chase home from the mid Fantasy Suite after telling her he loves her! Chase said can usually read people really well, but admits, he had no read on Jojo at all.

“That phrase ‘I love you’ carries a lot of burden and expectation. When you’re willing to say that you mean it,” said Chase. He also said it felt perfect to open up and he doesn’t understand why she gave him the Fantasy Suite if she didn’t love him. Chase said “I absolutely am in love with her.” Chase wants to ask Jojo why. 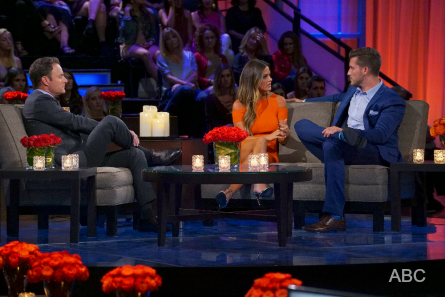 Jojo arrived to the stage to answer some questions from her 26 ex-boyfriends. That’s a whole lot considering before “The Bachelorette” show, she had no experience breaking-up with guys at all! Jojo said with Luke, “it was an instant connection. It was great.” However, Jojo said “something on that last date, it didn’t feel like it should.” Luke asked her if he had been more direct with his feelings, would she still have sent him home.

Jojo responded, “It’s hard for me to say if I would have. The one thing that she struggled with was that last date. She said she didn’t hear words of acclamation. “That’s how I feel safe and that how I feel love,” said Jojo and felt he was just saying things because he felt like he had to say them. Jojo stuck with her gut.

Chase went onto the stage to sit with Joj and asked her why did she give him the Fantasy Suite if she didn’t love him. Jojo responded that when she heard him say that he loves her, “that was the moment that I felt if we spent the night together, it would be tougher.” Chase said most of all Jojo taught him a lot and thanked her for that.

Next, Chad uttered some words of negativity and bitterness to Jojo, “unfortunately I wish you didn’t listen to all the guys”. Then, he attacked the two men left. Chad stated that Robby broke up with his girlfriend a few days before the show to be on the show, and Jordan is a “lier and cheater” that not even his own brother wants to talk to him. Jojo didn’t acknowledge Chad’s comments. When Harrison asked her to respond, Jojo said “he’s not even worth my time”, and “he loves this. This is what he wants!” The audience cheered in support of Jojo.

Alex said I don’t know how to deal with that instant rejection he said after he opened-up. “To end it like that, it was hard.” He said he couldn’t say that to her then because he was just “numb”. Jojo replied that there was so many times where she thought if she could reach out to the guys that she sent home to elaborate more on her decisions after the fact.

Drew asked her if she repeat the time that she gave him the group date rose because he needed “reassurance,” would she change the use of that word – “reassurance” Jojo said “no” and in her mind, she just wanted to give him reassurance. “I still need reassurance and I don’t see that in a negative way.”

NEXT WEEK: ABC airs the finale of “The Bachelorette” Monday, August 1st where Jojo will potentially choose one man. Will it be Robby, or will it be Jordan? Maybe it be neither. 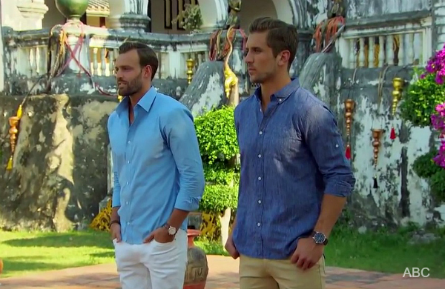