“America’s Got Talent” season 16 returned for their third week of auditions and exposed more interesting acts to all of America to enjoy, or maybe cringe!  The acts in this week’s one hour long episode included some talented singers, a funny stand-up comic with original and interesting material that even made Heidi laugh (toughest critic), and one act that was so strange, all the judges were too afraid to vote “no.”  But the final act of the night, which was preempted from the Olympics due to Covid, was extremely amazing and has to be seen to be believed.  Host Terry Crews used his Golden Buzzer in this week’s episode. 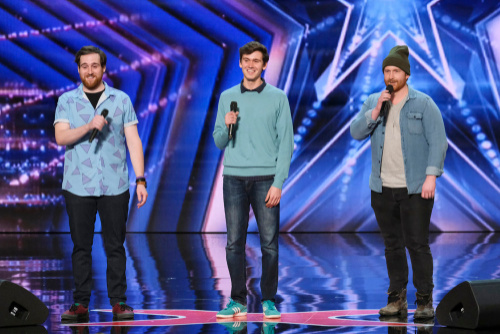 T.3 is a singing group of three men ages 24 to 30 from New York City.   From the group, Brendon, and Liam spoke to the judges briefly about how they all met and started singing together.  They’ve been singing for 13 months before performing on AGT and it was their first time performing in front of a crowd.  They sang in high octave a cappella.  They sounded like an a cappella version of Queen and they were really good!

The audience cheered uncontrollably.  Heidi loved it.  She asked if they saw her sing that song with her husband in the shower?  Of course she was joking.  Howie quickly affirmed that she was talking about “online” not in real life!  Heidi reacted that “it was a lot of fun” and she really enjoyed it.  Sofia said “It was so unexpected” and she loved it.  Howie called them a joy and their energy was “infectious.” Simon said it was a “complete surprise” which they love and “the harmonies were amazing.”  They received all “yes” votes.

Kabir is a stand-up comedian from Freemont, Ca.  He said for the last 10 years he’s been financially supporting his mom through comedy after his Dad passed away.  Last year during the pandemic, he said it was challenging.  He said he wanted to go up against the best, which is why he wanted to compete on AGT.   The audience loved him and Kabir got a standing ovation.

Simon said Kabir’s jokes went from serial killing to paying a phone bill and it was impressive.  “Great audition.”  Heidi said she was thinking “am I allowed to laugh at these jokes?” But, she thought he was funny.   Howie reacted, “you’re magnetic and you’re a star.  You’re going to do great in this competition.”  Simon could sense that it meant a lot to Kabir getting onto AGT.  Kabir confirmed.  Kabir got all “yes” votes.

She said she was there to prove that age is just a three letter word and she’s 70-years-old.  Mama Char was there to display her dancing skills.  Her dance was just swaying side to side to Paula Abdul’s “Straight-Up” song.  Simon hit his buzzer right away.  Sofia said “the only one that was really enjoying this was you.”  Simon said she didn’t lift her feet up once. Heidi said she didn’t realize Char had started her dance routine and she was waiting for it to start.

Storm said she’s fifty years old and although Simon thought he met her before, she said it was her first time coming onto AGT.  After her performance, Storm got a standing ovation from all the judges and the audience.  Heidi said she had never heard that song that way before.  Howie said she made him love that song and nobody would know it was a cover because she made it her own.  Sofia said her voice was super sexy and powerful.  Simon said Storm had an amazing voice and amazing personality.  Simon gave Storm her first “yes” vote, followed by “yes” votes from the rest of the judges.

The next act said he’s the “sum of all your fears.”   Klek said the box would have all their childhood fears.  He had Heidi pull a paper out of the box first.  Sofia had to put five ink blots on the sheet of paper.  She was told to “try to create an original shape.”  Then Terry was called to join them “to assist.”  Each judge would have their own interpretation of the ink blot.  Terry saw a spider.   Klek said it would fabricate into a real thing.  Then opened the box to show a real-life, HUGE Tarantula spider.  All the judges were out of their seats.  Then Klek picked up the spider and placed it between his hands to make it disappear with a puff of smoke.  The judges were still freaked out as to where this spider “disappeared to?”

The Miss Fit described her style as avant garde, lady gaga and panic at the disco dramas.  I’m bigger than pop. I’m bigger than art.  She said she knew at five she was meant to be a rock star and she’s “destined to win.”  She’s from New York City.  She said the dream is to have her own show, world tour and “taking over the world.”  Unfortunately, Miss Fit could not sing and Heidi was the first to Buzz her.   Simon said to Sofia that “this is terrible.”  Sofia agreed.  Then, Simon buzzed Miss Fit.  Heidi reacted “I was NOT loving it…it didn’t sound so great, and I wanted it to sound great.”  Howie asked is she is an aerialist, or what she was. She answered she’s an aerialist, athlete, singer, etc… Howie advised her to focus on just one.  Simon said it sounded like she was being tortured during the whole routine.  It was four “no” votes.

They were invited to perform at the Olympics, but couldn’t due to Covid.   Their act was truly amazing and very original.  They performed Taekwondo.  Masters of the sport on stage flew in the air (two stories high) one after the other, kicking plywood into bits in the air.  During the finale of their act, they displayed a large “AGT” flag.   After their act was over, the judges were about to respond and vote when host Terry Crews interrupted to tell them “no they don’t.”  Since the act wasn’t able to go to the Olympics to win a Gold metal, he’s giving them something gold right now!  And Crews pushed his Golden Buzzer for them, pushing them straight to the Live Shows!   Howie said he’d buy tickets and “go see that anywhere.” 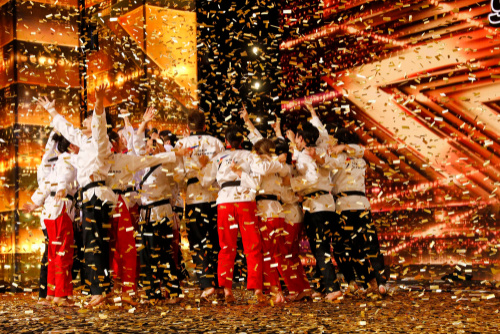