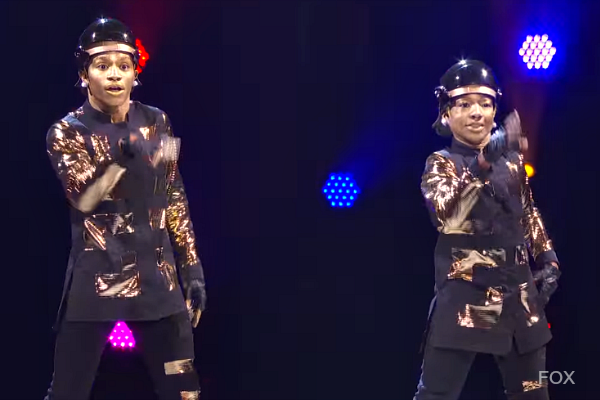 FOX’s “So You Think You Can Dance” is two weeks away from naming America’s favorite dancer from season 13. The votes from this week’s “Top 5 Perform” show will be tallied with next week’s “Top 4 Perform” show to reveal the winner in the finale.

Week 6 of “So You Think You Can Dance” produced some stand-out dance moments when the Top 5 kids were paired together to dance genres outside of their own, then dancing with their All-Stars. Some memorable performances came from Tahani and Comfort who had the challenging task of dancing with baseball bats and getting “Banji” choreographed by Jamal Sims: Tate & Kida who knocked-it out of the park with a Paso Doble choreographed by “Dancing with the Stars” Mark Ballas; Emma & Gaby’s “We Will Rock You” tap number; J.T. & Emma’s contemporary piece by Travis Wall. They were accused of being “too sweet” by judge Nigel Lythgoe.

This week’s recap revealed the Top 4 dancers that will compete for “America’s Favorite Dancer” title along with $250,000. The Top 5 kids – Tahani, J.T., Emma, Tate, and Kida danced with their partnered All-Stars Comfort, Gaby, Kathryn, and Fik-shun to professional choreographers. In the second half of the show, the kids choreographed dance numbers for themselves with their All-Stars in honor of the show’s 250th episode.

The opening number was choreographed by R.J. and Nick. The Top 5 and All-Stars danced to “I Miss You” song by Bjork.

The first dance was contemporary with Kathryn & Tate choreographed by Stacey Tookey. The theme was them playing themselves. “I think it’s a gift the two of them working together. Kathryn believes in Tate more than she believes in herself. Tate shows Kathryn things she never thought imagined by someone so young,” observed Tookey. 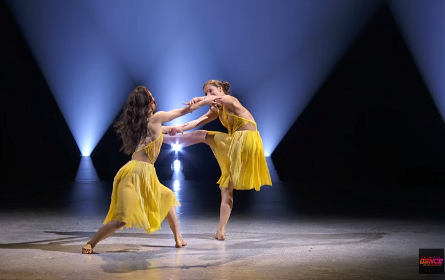 Judges gave a standing ovation at the end of their performance. “So much humanity and truth in that number,” said Paula. Maddie said they were like angels and their connection gets stronger. Jason reacted, “this piece was about a journey and growing together,” which they’ve (judges) been able to watch. He complimented Tate by calling her an “All-Star.” Nigel said God has given Tate a gift which she is doing well with.

No theme, “it’s all about energy” explained Pharside & Phoenix on their choreographed piece for Kida & Fik-Shun. In the routine, they are having a battle to see who can “outweigh” each other. Kida said the hand movements in the number are challenging.

Maddie stated that it was “another incredible piece by Pharside and Phoenix.” She said Fik-Shun and Kida are “equally so good” and they bring so much “presence and fire” to the stage. Jason couldn’t contain himself. He said he’s never seen them get that “buck” and brought the Krump back for him. Nigel observed that Kida needed to be “a bit larger” with his arms when wearing the jacket. Paula complimented Kida for finding his own style and take on it.

Emma and Gaby had the great pleasure of working with famed tap dancer Savion Glover as their choreographer. Savion said he wanted to “shed a little light on the old-school” with his choreography.

They got a standing ovation from the judges. Jason was thrilled to have Savion Glover there. He asked Emma what it was like to work with Glover. Emma said it was “amazing” and he was a little tough but also “chill” and nice at the same time. Jason said it was 100 times better! Nigel said he had been trying to get Savion on the show for a number of years. He “adored it!” Paula noticed the routine was “beautiful and nostalgic” and applauded Savion for challenging Emma. Paula was most impressed with how Emma has grown and called Gaby “a dream”. Maddie said it felt like there was only one tapper on stage, and was nice to see something different and more relaxed from them.

Their dance was about a father-son relationship where Robert has given J.T. some devastating news and Robert becomes more than his parent. Stacey advised J.T., who is extra small, to heighten himself with his arms, point his feet and jump high.

They got a standing ovation from the judges. “If every father danced with his son like that, this world would be a better place for sure,” said Nigel. He said he was thrilled with the routine. Paula said they “kill” her every week. “I get so moved by the two of you.” She called them a Picasso in a bucket. Maddie said it was “so beautiful” and loved the moving story. Jason called it a “compelling performance”. He said J.T. has the perfect marriage between innocence and maturity. Jason also complimented J.T.’s desire to make it about getting to the next level and told him to never lose that.

Tahani and Comfort did a tribal hip-hop dance about two indigenous women who discover hip-hop dance for the first time. Paula reacted that she was exhausted for them and it was a tough routine, but they pulled it off. Maddie called it “awesome” and loved having the African style on the stage. Jason noticed that it was really challenging and thought they did it very well. Nigel loved the hip-hop together with the African dance and to see it develop.

THE KIDS ARE IN CHARGE!

In celebration of the 250th show, each of the Top 5 dancers had to choreograph routines with their All-Stars. That meant that they also had to come-up with the concepts, costumes, and makeup.

Tate’s concept was not to worry about being perfect. “This piece is the moment we really get to see what’s inside of her,” said Kathryn about Tate. 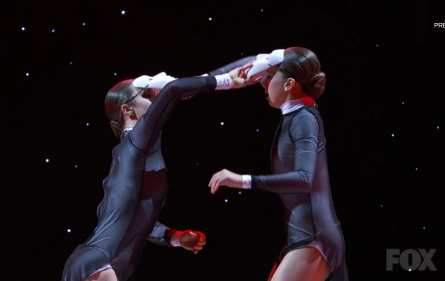 Maddie responded that she knew Tate was going to be good, but this was amazing and impressive. Jason said it showed that Tate is one of the more experienced dancers on the show. Nigel congratulated Tate too and joked that she’s a lot cheaper than the choreographers SYTYCD hires. Paula said Tate is a great choreographer in the making.

The routine was called “The Manipulators”. Kida took it back to the old-school popping. It was about a robot that just came to life. The routine also included animation and locking.

Jason reacted, “are you kidding me right now!!” He told Kida he’s also a great choreographer in the making. Nigel said the kids are making the choreography look so easy and complimented him on making it fun too. Paula said it was “so awesome” and he’s a fire-cracker. “Tonight is all about Kida.” Maddie said Kida’s choreography is “insane” and he paid attention to every detail. By far one of her favorites of the entire season.

Next, a dance routine was performed by the All-Stars Jenna, Kathryn, Sasha, Marko and Paul choreographed by Theresa Stone whose credits include JLo and Lady Gaga.

J.T.’s dance was “The Friendship Dance” about how thankful he is to have Robert in his life. The song they danced to was “Count on Me” by Bruno Mars. 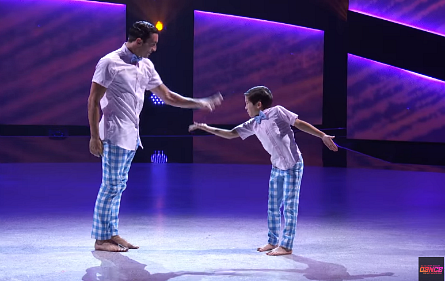 Nigel said he loved it but not sure about the outfit which was blue bow ties, pink button-down shirts and blue checkered pants. Nigel said J.T. stands for – Just Terrific, Just Ten…and “you just won me over and I’m captivated by you.” Paula said every week, Nigel is bothered by how much he likes J.T. and Robert’s chemistry along with J.T.’s cuteness. Maddie said she liked the costumes and called them “cute.” Jason said he was blown away with J.T.’s choreography and gave him another standing-O.

Al Blackstone choreographed a piece with the rest of the All-Stars Comfort, Fik-Shun, Robert, Jonathan, and Gaby. 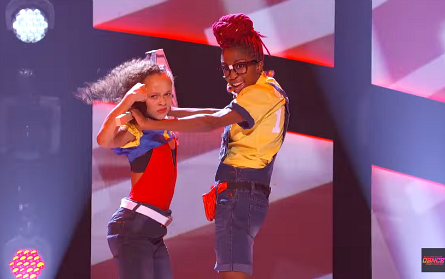 Tahani’s dance was called “No Flex Zone”. Her inspiration was “Grease” the movie with Comfort as a nerd and her as a cool girl. Paula said Tahani rose to the challenge and loved that Comfort was made to look like a nerd. Maddie called it a “cute idea”, and said she’ll be an amazing choreographer. Jason said they turnt all the way up and good that she took Comfort out of her “comfort zone.” Nigel “loved it” and said he couldn’t take his eyes off Tahani.

Emma had the creativity to use a cappella group Pentatonix’s song “Rather Be” and used the taps as the lyrics. Emma’s concept was about how she loves hanging out with Gaby and doesn’t want the journey to end. Gaby called Emma’s teaching style “drill Sargent”.

Maddie said their tap sounds were “so clear and perfect.” Jason said Emma brought us back to “the Emma we fell in love with.” Nigel said tap choreography is the toughest. Paula said the magic was Emma singing through it.

TRAVIS WALL & MADDIE ZIEGLER danced together with Travis choreographing. His concept was light vs dark, young vs. old.

Nigel said it’s been an incredible show and it’s about the Top 5’s creativity. “I hope you’ve all enjoyed this experience this week. Whoever goes home tonight, go home with the knowledge that you are all sensational and have a hell of a career ahead of yourselves… and nobody voted against you. You are all stars.”

Unfortunately, Tahani had the fewest votes and was eliminated. Her All-Star Comfort said, “Tahani is a beautiful spirit and it was beautiful working with her. Her spirit shines so bright.” Comfort told Tahani, “God has so many plans for you young lady.”

NEXT WEEK: The Top 4 finalists compete next week and this weeks votes will be combined with next weeks for the finale airing on FOX on Monday, September 12th. 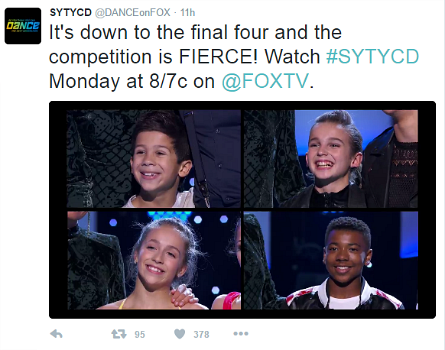