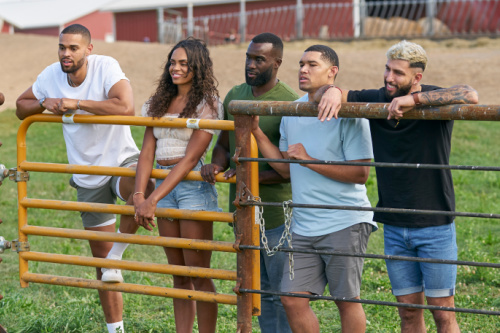 This week, a rose means that Michelle is going to the guys’ hometowns to meet their families.  Michelle’s fifth grade students chose the date activities.

Michelle got to visit with four of her students.  They wrote her a letter saying that they’re glad that she’s “The Bachelorette.” Michelle stated “a child’s opinion can be very, very helpful.”  The four students were sent into the room of eight men to announce that they’re planning all of the dates that week.  Then, they had some questions for the men.
Martin started going on and on about a dinner date with Michelle.  The student said she doesn’t like Martin because he’s show-off and wears too much cologne.  Then Clayton came up with the idea to build the kids a forte with pillows and sheets.  It was a tactic he used to get chosen by the kids for the one-on-one date.

The students brought in the date card.  It read that they liked everyone, but they “liked one guy the best.”  Michelle relied on the help of her fifth grade students to choose who she was going on a one-on-one date with.  They chose Clayton.

Michelle and Clayton started their date with a limo ride which came equipped with an extra large pizza and red vines.  Michelle said she needed one-on-one time with Clayton to see if she could get where she could get in order to want to meet his family.

They arrived at the National History Museum at night which meant that they had the whole museum to themselves.  They played a trivia game which got them to share their character traits.  They finished-off the night kissing in a planetarium-like room.   Clayton said in his confessional that Michelle “could be the one.”

Back to the men:  The men were sulking over who was going to get the group date and who was going to get the next one-on-one.  The date card arrived and it read:  “Rick, Rodney, Nayte, Joe, Martin, Olu.  Love is messy, – Love Michelle.”  That meant that Brandon got the one-on-one date.  Olu was disappointed because he was the only guy left not having had a one=on-one date yet.

Back to Clayton and Michelle:  Clayton said he’s ready for love and “while it’s scary  It’s also very exciting.”  He told Michelle that he feels a lot of things that he hasn’t felt in a long time.  Clayton said at his arrival to the show, he was 99% sure of who he was.  He said he’s vulnerable.   Michelle said in her confessional that there are eight wonderful guys there and she has to make the difficult decisions.

Back to the men:  Martin doubted that Clayton would come back with a rose.  “If she’s going to meet my parents, I want to make sure we’re on the same page,” said Martin.

Back to Clayton & Michelle:  Michelle told Clayton that she knows who she is and she has a fear of being alone.  “For me, I stuck to my guns about who I was whether I had any one on my side.”  She told him that you have to learn to love yourself.  Michelle was having some reservations on if she wanted to give Clayton the date rose to meet his family.

Michelle said Clayton checks each box.  However, giving out the rose means that she’s ready to meet his family.  But, didn’t think she would be able to get there with him.  She said it’s not about him not being enough and she has to follow her heart.  “If I say there’s a piece missing, it’s not because you don’t have that piece.”  She said it’s because for her there’s something missing.  Michelle told him that at the right place and time, there will be that right relationship for him.

Michelle said for her there’s a piece missing where she can’t get her feelings there for Clayton.  Her heart was telling her that Clayton is a great person, just not for her.   “It’s hard sending Clayton home.

In his limo ride, Clayton said he wants to go back into his shell to protect himself from being hurt.  Clayton got the chance to say goodbye to the kids.  They wrote him a letter that told him they’re sorry that Michelle didn’t choose him.

One letter read that he would be “a really good husband for Miss Young.  I hope you aren’t too sad when you go home (as Clayton starts to cry).”   Clayton’s reaction was that he hadn’t cried in years and he does want kids one day.  Clayton said he wants to get married and have a family and he’ll do “whatever it takes.” 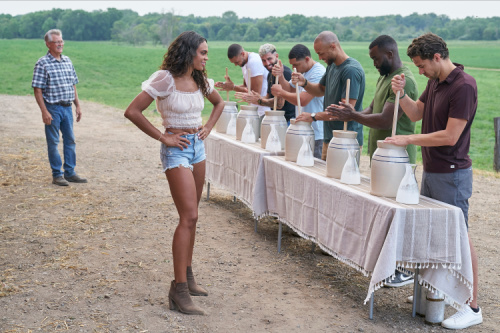 “Love is Mess” is what the date card read.  Her students planned a farm date.  Rodney said he’s never milked a cow and he’s switched over to Oat milk.  Rick was the first guy to give milking a chow a try.  Rodney didn’t have good luck when it was his turn.  Nayte and Joe were close in getting the most milk.  But, Joe was the winner.

Michelle noted that the calves liked Joe way more than Nayte.  The next challenge was churning butter.  Joe won that challenge too.  Then, they had to clean-up poop.  Nayte hurt his back, and used his injury to go talk to Michelle.

It was the last Group Date, Michelle pointed-out and wanted to make sure the men “leave everything out on the table.”  Nayte was the first man to get time with Michelle in the After Party.  He explained that he has “a unique family.”  His dad doesn’t want to hear about girls.  He said he’s never once felt that he’s wanted to introduce anyone to his dad.  But, with Michelle “it would be so ready to introduce you to my dad” and told her that he’s “strongly falling in love” with her.

Michelle responded that she feels “very strongly” about Nayte.  Then, during Joe’s time, Joe revealed that his grandparents owned a farm which explains why he was winning all the farm challenges.  Michelle said she was forming strong feelings for everyone and the choices are going to be hard.

Martin and Olu were worried about their lack of recent time with Michelle.  Martin’s last conversation with Michelle didn’t go too well.  Olu said Martin is the “only guy who raises red flags.”  Martin tried to redeem himself during his alone time with Michelle.  Then, Olu told Michelle that he has concerns about Martin and saw a red flag.  When she explained her poem how she felt “unseen.”  Martin reacted that the fact that she hasn’t dealt with her past was “immature.” Michelle thanked Olu for telling her that.  “That piece of information is huge,”  she told Olu.

Before Michelle gave out the group date rose, she pulled Martin aside to talk to him in private.  She asked him about his thoughts on her poem.  Martin denied that he ever said she was being immature.  When Michelle confronted Martin that he hasn’t been honest, she said she has to follow the fact that she can’t trust him at that moment and sent him home.  Michelle said what hurts the most is that she was so vulnerable with Martin and for him to turn around and call it a “character flaw” is very painful.

In his ride home, Martin said “a woman like that doesn’t deserve my time,” and he thought she was making a mistake.

Michelle gave the date rose to Nayte.  Rodney was sad that he didn’t get the rose.

It was Brandon and Michelle’s first one-on-one date.  Michelle took Brandon to one of her favorite places, an ice cream spot that’s only open for a few months in the Summer.
Michelle surprised Brandon with a private tour inside the house that she grew-up in.  Brandon was super nervous at first, then she said her parents weren’t home.  So, he was relieved by that.  Michelle asked Brandon if he wanted to “take a dip in the pool.” She gave Brandon her dad’s swim trunks to wear.  They had some romantic time in the jacuzzi.

Then, of course, Michelle’s parents came back and caught them.  It seemed a little staged. Brandon was incredibly shocked, and Michelle’s Dad said the shorts “look familiar.”

After they got dressed, Michelle and Bradon sat-down with her parents for a chat.  Brandon told her parents that Michelle is the “most special person” he’s ever met.  Michelle at the Cocktail Party at the second Rose Ceremony, Brandon talked about how much he trusts MIchelle was when she knew Brandon was special.  The “do you want kids” question came up.  Brandon quickly said he wants three kids.

Brandon asked for advice.  Mom said her husband is her best friend and he always chooses her first.  She always knows that he has her back.  Dad advised “just love that person to death.”  Michelle said Brandon held his own.  He was “genuine and sincere” and her parents seemed to like him  as well.  Then the parents spoke to Brandon without Michelle.

Brandon said he feels “so deeply” about Michelle, and he didn;t waste any time in getting their blessing if he should be the last one there.  Both parents said they gave their blessing.

During dinner, Michelle and Brandon had more time to talk about family.  Brandon answered Michelle’s question on who she would meet if she went to his hometown.  He said the one person he would have liked her to meet was his grandfather who passed.  Brandon said he taught him a lot.   Before Brandon arrived on the show, his mom gave him a bracelet and told him that if she’s the one, then give her the bracelet and when they see it on her, she’ll give her the same love that she gives to him.  Brandon gave Michelle that bracelet.

Michelle said it’s the most meaningful gift that she’s gotten.  Then, Brandon told Michelle that he’s falling in love with her.  She responded that her heart is going a million miles an hour and they kissed.  Michelle told Brandon that he continues to impress her.  “The thing that stands out the most is that I can see you being my best friend.”  She gave him the date rose.   Because she wants to meet his family to see what makes him, him.

Michelle said she knows how hard Brandon loves and “its very possible that I could fall in love with Brandon.”  She said that night is the start of all of it.

Tayshia and Kaitlyn brought bad news to the men, which was that the Cocktail Party was cancelled because Michelle already knew what she wanted. 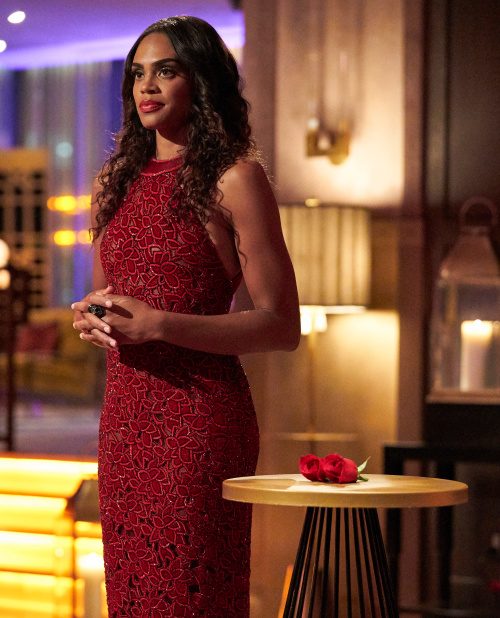 Nayte, and Brandon both had roses.

Michelle said she decided to cancel the Cocktail Party because she knows where her heart is at.  “Tonight’s decision is the hardest decision I’ve had to make while going through this process.”  Michelle said by giving a rose, she not only sees a future with them but also with their family.

Men who Got Roses:  Joe, Rodney.  That meant Olu and Rick went home.

Olu thanked her for this journey.  Michelle told him he’s absolutely amazing.  Rick said goodbye next.  He said he could see himself introducing Michelle to his mom and brother.  “I pray that she finds someone that treats her right until the end of days.”  He prayed for himself to find that too.

The four men left are: Brandon, Rodney, Nayte, and Joe.

This episode of “The Bachelorette” further set-up the viewers for the next ‘Bachelor by including an end of credits clip of one of Michelle’s students stating that she wants Clayton to be the next Bachelor!