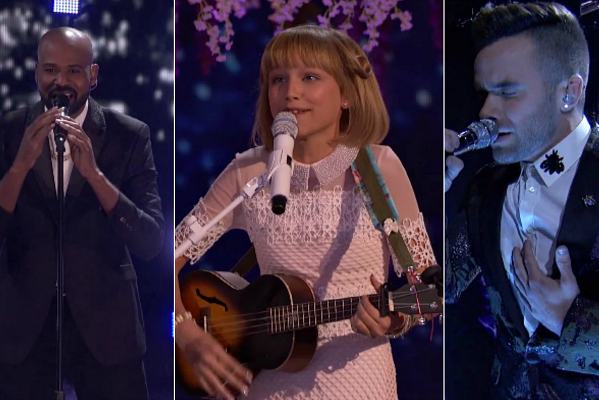 “This was the song I was waiting for you to do. This could upset the whole competition!” – Simon Cowell

The final ten acts performed in the “America’s Got Talent” season 11 finals for a last vote to win the grand prize of $1 million and to headline a show in Las Vegas.

The second night of the two night finale will not have a Judge’s Vote to save an act. Simon called his prediction after contestants’ performances Tuesday night stating he thinks that Grace Vanderwaal will be one of the very last acts standing in the finale. 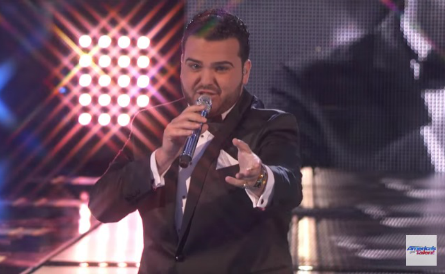 Heidi, who Sal is her Golden Buzzer, said Sal has the most “amazing, velvety” voice and “sparkling blue eyes!” Mel B. exclaimed “you smashed it! Well done!” Howie thought they don’t do shows like that anymore. “Well, YOU do shows like that!” he said to Sal. The only thing Simon didn’t like about the performance was that “it ended too quickly.” He told Sal, “this was the song I was waiting for you to do. This could upset the whole competition!” 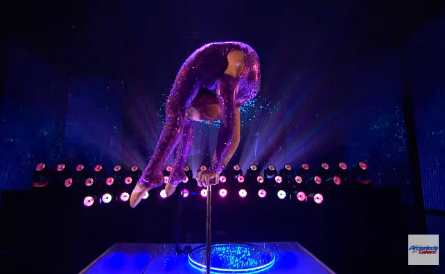 Mel B. reacted to Sofie’s performance, “you added the element of danger. It was brilliant and beautiful!” Heidi said “absolutely amazing, mesmerizing to watch.” Simon told Sofie that she astonished him without question. “This was your best performance of the season” and if he could give it a score, he’d rate it a 10. Howie described her as “half way between Gumby and Oragami. Nick Cannon asked what it would mean for her to win AGT. Sofie responded “it would be a huge dream of mine to win AGT.” She dedicated the performance to her Grandpa who passed one year ago.

Linkin Bridge sang “See You Again” by Wiz Khalifa. Howie said it was a perfect song for them because no matter what, “we’ll see you again.” Simon said “I love everything about that from beginning, middle, end. You’ve done everything yourselves….Hard work. You’ve got a real shot with that performance.” Howie told them that they ARE a linkin bridge. “You’re all one now!” Mel. B. complimented them that they get better and better. “Your harmonies get tighter.”

Simon told Laura she’s an extraordinary talent who “always hits that big moment and I think she can’t be 14. That’s a $1 million performance tonight.” Mel B. reacted “I did hear your nerves tonight. But, you did hit every note with accuracy.” Heidi said “tonight you look like a princess, but you ruled the stage like a QUEEN!”

“The Clairvoyants” act consisted of them deciphering the age of an audience member, then reciting Simon’s credit card info while hanging upside down in a water tank. Mel B. commented that it was “just mind-blowing and really, really scary!” Heidi told them while looking into her “crystal ball” which was Howie Mandel’s bald head – “I can see into the future and see a Las Vegas show coming for you soon.” Simon said “based on the performance, you’ve done so far, it’s going to happen for you. Incredible.”

Brian Justin Crum gave another awesome vocal performance, this time singing Michael Jackson’s “Man in the Mirror.” Mel B. said “that was a risk. But, you owned it and you made it yours. What power!” Heidi said “It was like you were singing for your life, or for $1 million.” Simon said he thought he made a mistake, then thought “you made the best decision of your life. Naturally, brilliant performance.” Howie said he liked Michael Jackson’s arrangement of the song better. But Brian Justin Crum’s performance was “epic”. 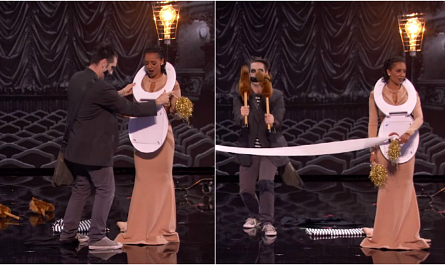 Tape Face performed an act that required Mel B. to have a toilet seat around her neck and pulling toilet paper from her. Heidi said she never thought Tape Face would make it this far. But she’s glad he did because “you made us laugh each week.” Simon said it was “probably one of Mel’s best performances of her entire career!” He also said it was “weird, fantastic. I don’t know what it was.” Howie reacted “you put Mel B. in a toilet. I love it! It’s amazing. It’s stupid It’s wonderful!” Mel B. commented “Everyone was laughing. So, I’m assuming you delivered.”

The last performance of the night was by Grace Vanderwaal. 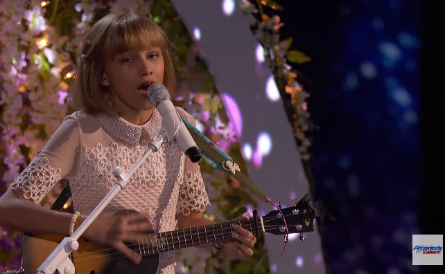 Howie said Grace’s performance was his favorite moment of the night. Mel B said “you’re meant to be here. You’re meant to be singing your heart off.” Heidi told Grace “you are the rarest diamonds of all. You’re a true gift to music.” Simon commented “finding stars should be difficult. You did it in a real way and you deserve your place tonight. You’re going to be there in the end. I can feel it.”

The second night of the two part “America’s Got Talent” season 11 finale opened with The Jersey Boys singing “Oh What a Night” with contestant Sal Valentinetti.

Grace Vanderwaal sang an original song which topped millions of downloads. He performance was followed by her idol Stevie Nicks. Nick said “Grace has it.” 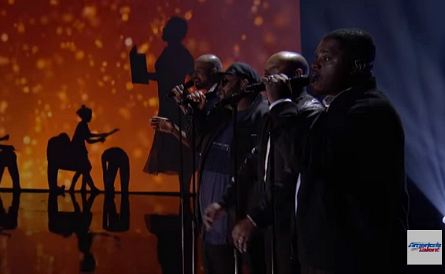 Pictured: Linkin Bridge with The Silhouettes

Linkin Bridge sang a repeat performance of “7 Years Old” song by Lukas Graham, this time, with past AGT contestants “The Silhouettes.” 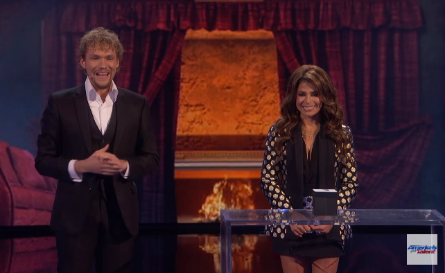 Next, The Clairvoyants pulled-off another amazing trick with a Lottery theme. They involved Paula Abdul who helped by reading the Lotto numbers. But, wait, there was MORE!! Magician Jon Dorenbos came to the stage to perform a magic trick that continued from The Clairvoyants act. This also involved Paula Abdul where she ripped-up a playing card, then Jon made it re-appear whole.

One huge combined performance was done by Laura Bretan, Viktor Kee, with Sofie Dossi who were all joined by pro opera singers ll Volo. 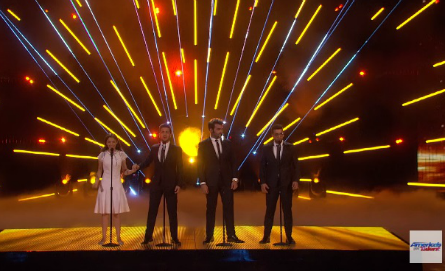 Then, the fun was over and it was time to announce the Top 5 acts. Though, in no particular order said host Nick Cannon. Tape Face faced-off against Sal Valentinetti. Sal moved on to Top 5. Then, singing group Linkin Bridge was up against magician Jon Dorenbos. Jon got it. Grace VanderWaal went head-to-head with contortionist Sofie Dossi. Grace solidified her move to Top 5. Juggler Viktor Kee was up against illusionists “The Clairvoyants”. The Clairvoyants won their place. Last, singer Brian Justin Crum beat-out 14-year-old opera singer Laura Bretan for his spot in Top 5.

Simon commented “it’s been the most incredible competition. The best I’ve ever been on!”

The real shockers came with the Top 3 acts were revealed. Jon Dorenbos beat-out Sal Valentinetti. Heidi said to her Golden Buzzer Act, Sal, “this is not the end. I love you so much!”

The next act leaving was, another shocker, Brian Justin Crum! He was a lot of fans bets for the winner this season. Before leaving the stage, Crum said, “this experience has meant the world for me. Like Sal said, this is just the beginning.” Mel B. was utterly shocked. She responded “I’m really, really shocked. You have a killer voice and will go on to do amazing things. Your first concert, I want a ticket.”

The only acts left were: Jon Dorenbos, Grace VanderWaal, and The Clairvoyants. Before revealing who would take third place, Nick Cannon said there was less than a 1% of the vote separating all of the Top 3. Third place went to Jon Dorenbos. Jon said the two groups left “deserve it.” Howie told Jon “your story begins here. You’re an inspiration. Go get them!” 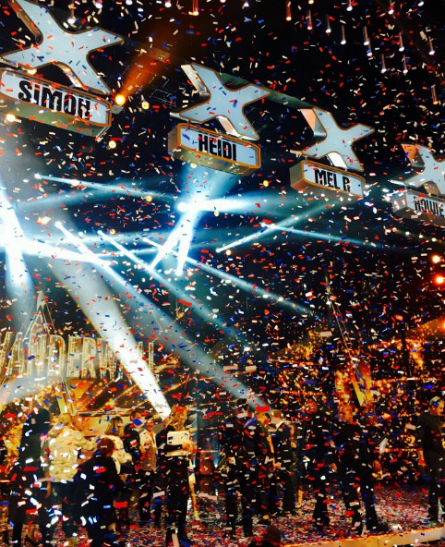