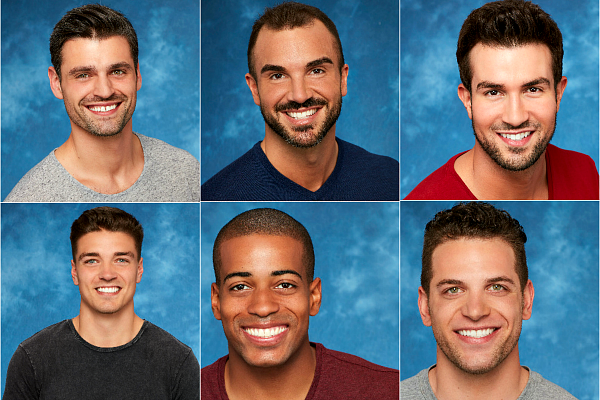 In it’s history making season “The Bachelorette” season 13 is getting close to the end. After ABC aired a less than stellar two-night ‘Bachelorette event in week 5, Rachel Lindsay said goodbye to a slew of men which has resulted in only six men remaining.

Ironically, after starting with thirty-one suitors that consisted of the show’s most diverse group of contestants ever. ABC’s “The Bachelor” franchise had gotten accused of being “too white” for past seasons that showcased a predominantly Caucasian cast, only one African-American male, Eric, remains as a possible final, one-and-only last man standing. 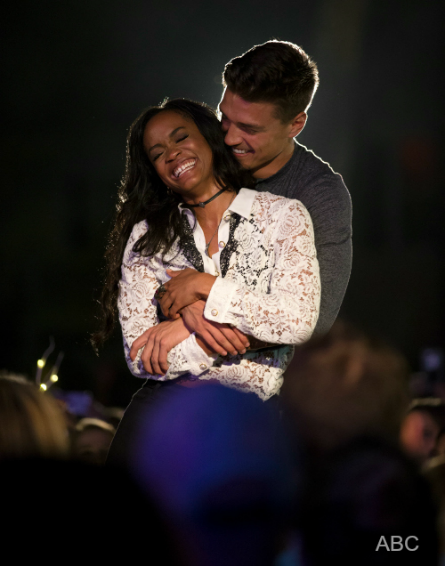 So far, the men who are left are: , , Eric, Peter, , and Bryan. Rachel seems to have the most chemistry with Bryan, and after that steamy hot tube make-out session, Peter comes-in at a close second place. 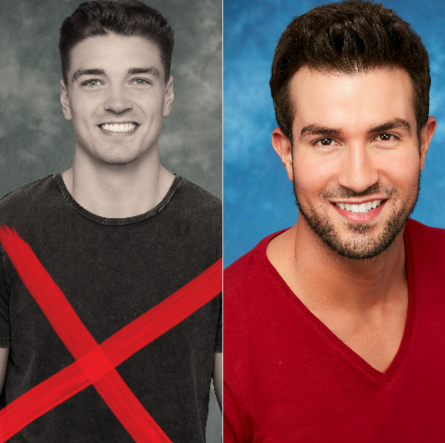 Update: Dean was eliminated in Week 7, after the hometown date.
Week 6: Rachel took Dean out for her second one-on-one date. Getting a rose on this date would mean that Dean would also get the hometown date next week. “My family is not going to be the family that you want to see,” Dean told Rachel. He said the second that his mom passed-away, his dad didn’t become that person that he needed him to be. His dad is “eccentric” said Dean. He told Rachel that his family abandoned him at the most vulnerable time in his life. Rachel told Dean that she has a much better understanding of him. She said she wants to meet the people that made him the “amazing person” that he is today, and gave him the hometown/date rose. Dean confessed that it felt good that Rachel accepted his dysfunctional family.

Week 4: During dinner, after Dean shared his story about his mother passing, Rachel gave him the date rose. After that, the couple got serenaded by musician Russell Dickerson at a street concert. Dean said he could feel himself falling in love with Rachel and called their date the best date of his life. Rachel called their date “amazing” and “so real” with a future.

Week 3: For the second group date, Rachel brought-in her “friends” from “The Bachelor” from last season, she said to get their opinions. The friends were Raven, Corrine, Jasmine and Alexis. Rachel said she intended to seek their help in weeding the men out. In private, the girls told Rachel that Dean was one of their favorites.

Premiere episode: A few limousines into the night, brought the one filled with some of the guys that Rachel met earlier during a live broadcast of “After the Final Rose” from Nick Viall’s season. The man, Dean, that told her “I want to go black and never go back” finally got her feedback on that statement. Rachel responded “it was cute. I love the confidence.”

Week 6: Bryan got the first one-on-one date in Geneva which started immediately. The other guys were super-jealous especially since neither Adam, nor Matt had yet to have a one-on-one date with Rachel. Rachel and Bryan took a ride in a Bently all the way to a watch store where Rachel purchased matching watches for themselves. Bryan was so elated that he started kissing her non-stop in the store.

Bryan was the first man that Rachel kissed the first night the mansion. Week 5: Rachel plucked Bryan from the group of men to take on her first one-on-one date in Oslo, Norway. They visited the Olympic ski jump where they repelled off of it. Rachel said when she sees Bryan, she “sees forward” and he doesn’t bore her. During their date, Rachel was perplexed in trying to figure-out why Bryan, at 37 years of age and handsome, is still single.

Bryan said he felt that Rachel has opened-up to him a lot more and helped her to trust him in their date venture. Bryan said Rachel exceeds his expectations and he’s falling for her. Then, he told her that he’s falling in love with her. Bryan said he suspects that Rachel feels the same way because her look that she gave him was “magical.” During her confessional, Rachel said “I like Bryan A LOT! A LOT!

Week 2: Bryan, who’s a chiropractor, offered to help make things better for Rachel after dealing with Demario by giving her a massage. Just as this was happening, re-enter Demario who was at the front gate begging for another chance to explain his side of the story to Rachel.

Premiere episode: The sexiest guy yet was Bryan from Colombia. He stole the first kiss from Rachel and spoke a bit more Spanish to woo her. Rachel ended-up giving the First Impression Rose to the man she said she “felt something un-explainable,” which was Bryan. 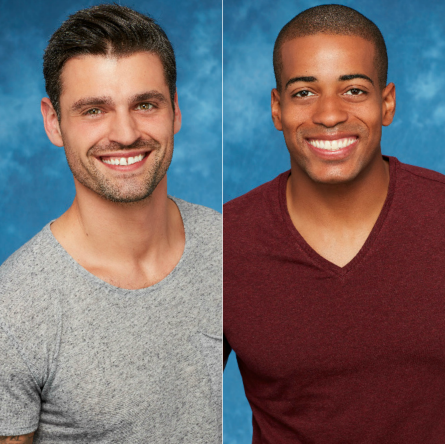 Week 6: Peter was Rachel’s first one-on-one date on the show. This week, he was her third one-on-one date. They took a helicopter ride to see the Swiss Alps, then dog-sledding. This is where Peter revealed to Rachel that on “the dark days” during the show, he didn’t want to stay. But, the connection he had with Rachel from the beginning has kept him there. During dinner Peter revealed that he’s never dated a black girl. He said he “thinks” that he’s ready to fall in love with Rachel, then told her the story about him breaking-up with his ex-girlfriend. He’s finally over the pain from that. But doesn’t guarantee that he’s going to get down on one knee to propose at the end of the show. Peter accepted the rose for Rachel to go to his hometown. Overall, Rachel said Peter is worth the risk.

Peter was one of the first men that Rachel kissed. Week 5: Rachel noticed that Peter is really “lasered-in” on her and notices things about her that other people don’t. The two spent some steamy time in the hot tub making-out. After that Peter was shocked that she gave the Group Date rose to Will instead of him.

Peter got the Group Date rose. Rachel said he stood-out in a way that she couldn’t explain. Maybe because he called her his “muse”.

Week 4: Rachel revealed to Peter who is from Wisconsin that she’s licensed to practice law in Wisconsin.

Week 2: Rachel’s first one-on-one date this season was with Peter. She had to come clean and tell him that it wouldn’t indeed be a one-on-one, but a two-on-one due to her “best friend” who was hurt in an accident and would be joining them. Peter thought it was an ex-boyfriend at first. But, when this “best friend” got out of the limo that rolled-up in front of them, it was “Copper”, Rachel’s dog.

Week 6: Eric joined Adam and Matt on the dreaded three-on-one date. Rachel pulled Eric to the side, and Eric confessed that she changes his energy and makes him happy. Rachel told Matt that it’s been such a pleasure knowing him, but she can’t take him on a hometown date. “It just not right for me to bring him along knowing that I have stronger connections with other men in the house,” explained Rachel in her confessional. Matt was sent home. Later, Adam was also sent home which meant Eric got the rose and the hometown date. Eric told Rachel it would be his first time bringing a girl home. She was shocked by this.

Week 5: The one-on-one date went to Eric when a card arrived that read: “Eric, I’m Copen to love.” Eric and Rachel talked future plans that included kid count. Rachel said she wants four kids compared to Eric’s ten! After their romantic time in a hot tub, Eric exclaimed that it was his “best date ever!”

Their date continued in a popular amusement park. At dinner, Eric confided in Rachel that he’s never experienced love, even from his mom and feared it. He said what he feels with Rachel feels “real” and as if he could fall for her. Rachel told him that she doesn’t question where she stands with him and gave him the date rose. Eric expressed that he feels like he can “do anything” when he’s with Rachel. 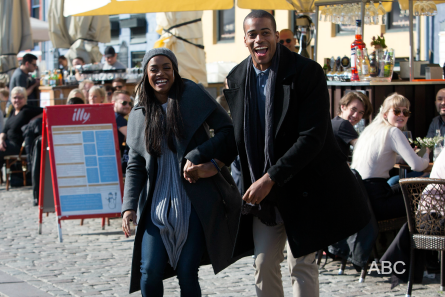 Week 3: Eric complained about not feeling passion from Rachel and told the men that he’s never been in a relationship. Eric sought-out advice from him regarding Rachel. Iggie was listening-in and decided to interject his opinion into their conversation. This didn’t go-down well with Eric who stated yelling and pretty much told Iggie to mind his own business.

During the group date that had former Bachelorettes from Rachel’s season, Bryce and Lee both told Raven that Eric was the least likely to be a match for Rachel. Somehow that got construed that Eric having questionable “motives”. A huge argument broke-out among the three men after Eric confronted Lee and Bryce.

Rachel gave the second group date rose to Eric. Of course, the men were beyond shocked. More accusations came from the men regarding Eric who all warned Rachel. This episode ended at the Cocktail Party with Rachel wondering if she should regret giving the rose to Eric, then Eric yelling at the men to keep his name out of their mouths while talking to Rachel. It was 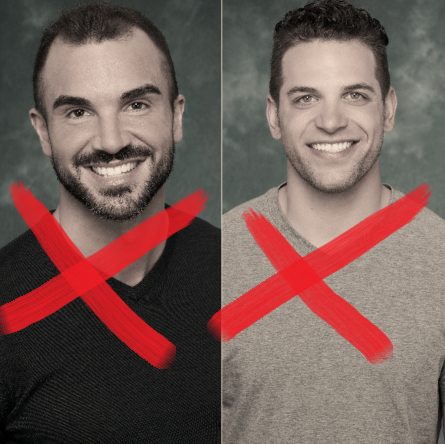 Update: Matt was eliminated in the week 6 episode.
As of Week 5, Matt has gone on four Group Dates and zero one-on-one dates so far. It could be that Rachel is keeping Matt around as someone who confides in her about some of the other men. Last week, Matt then expressed to Rachel about Kenny feeling that he isn’t sure where Rachel stands with him It was causing him much stress due to the fact he left his little girl back at home to be on the show. Matt told Rachel in regards to Kenny – “emotionally, he’s struggling.”

Premiere episode: Matt arrived as a penguin because he knows Rachel likes penguins. He told her that once penguins find their partners, they are mates for life. He told her he’s hoping that can be true for him. That made Rachel like penguins even more she replied. Previews of the season did show Rachel getting close to Matt. We’re waiting.

Update: Adam was eliminated in the week 6 episode.
Not a whole lot to report on Adam with his relationship with Rachel. What’s been shown in “The Bachelorette” show with him so far mostly consists of a compilation of Group Dates. Four to be exact.

Week 5: Kenny and Adam were chosen to fight for the final prize which was a trophy along with more alone time with Rachel. Adam and Kenny went hard at each other in this feat and ultimately ended-up injuring each other’s eye brow area with their shields.