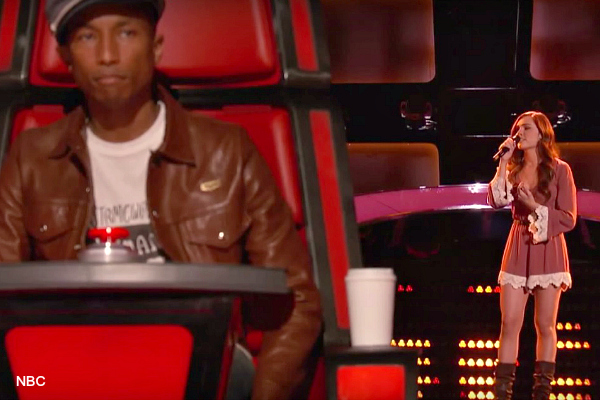 “The Voice” coaches have all almost filled their teams, and this is the time that they get really more selective in which artists they’ll push their buttons for. Gwen said she’s looking for something “different, recognizable and signature sounding.” It’s the last night of Blind Auditions before the next round, The Battle Rounds! Pharrell said he wants to continue to work with artists that he finds inspiring, and he’s hoping for another win. 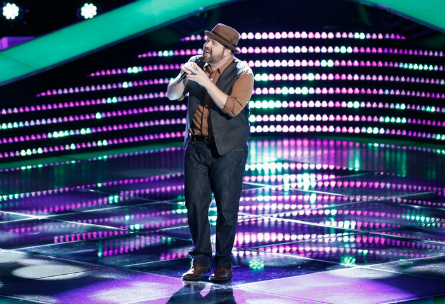 He sang “Downtown Train.” Blake said Dustin sounds like Neil Diamond during his Blind Audition. Blake, Adam, Gwen, then Pharrell all turned in that order. Blake told Dustin that they are “the same person”. He then asked the rest of the coaches who Dustin should pick. Dustin went with his gut and picked Blake as his coach. 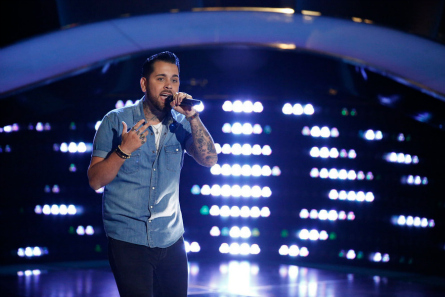 Dustin is a barber and said “The Voice” Blind Auditions are perfect for him because his voice doesn’t match his look because he looks like a rocker – tattoos and all. Adam and Blake turned their chairs. Adam heard that R&B in Dustin’s sound and told him “there’s a kernel of brilliance in there.” Blake said Dustin didn’t sound like Adam because he “sounded like a man” and is a fan of his now. Dustin chose Adam because he pushed his button first. Blake said he would have had a better chance if he had a tattoo on his arm like Adam. 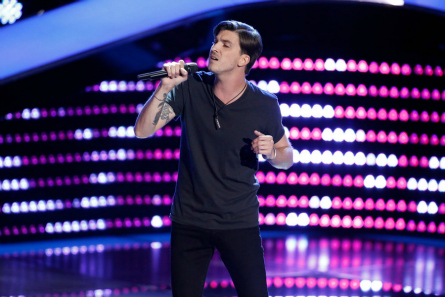 He’s fronted three bands. He currently helps his mom run her candy store and plays gigs on the side. He sang “The Scientist.” The only coach that turned for him was Gwen. Adam said he did a great job and loves that song. Blake said Gwen is the coach that he should be with even if all of the coaches turned. Gwen said his voice is “really special” and has so much control, dynamics and “really delivers the emotion.” Chase brought the coaches boxes of candy from his mom’s shop. 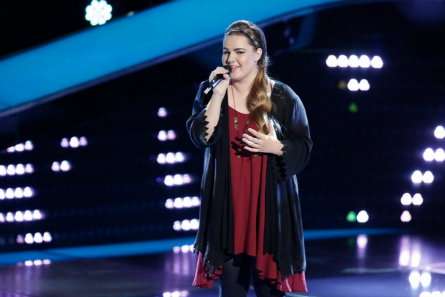 She’s a small town girl, 16-year-old from Alberta, Alabama with about 1600 people. Shelby currently performs at the local bowling alley. She sang rock song “Stars” incorporated with country. She wants Blake for her coach. What she got was not only Blake, but a four chair turn!

Adam told Shelby that “the brilliant moments were so brilliant. I have to be part of it.” He said he’s got one spot left and it’s for her. Gwen asked her what her dreams are. Shelby answered that she’s a country singer. Adam jumped-in and told her to “look away from the Blake!” Gwen told Shelby that she can help her develop as an artist. Pharrell said “you deserve to have four chairs turn around.” Adam told her to make the best decision based on the one best for her voice, and that she’s not ALL country. Adam and everybody else was shocked that she picked Adam. 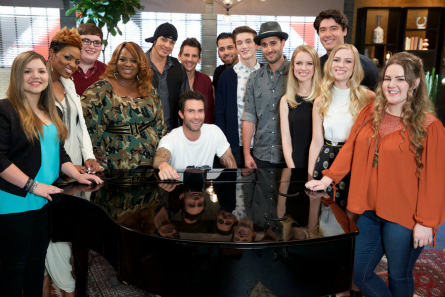 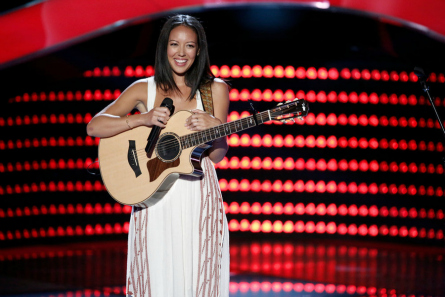 She’s 16-years old from Brooklyn, New York who was inspired to start singing by her dad who was in a rock band. She’s also a painter and said painting is an extension of her music but decided that to make singing her career. She sang “Dream a Little Dream of Me.” After her fist verse, all the coaches turned except Adam whose team was full. When she was done, the coaches gave her a standing ovation. Adam said if his team wasn’t full, he would have turned and she could possibly win this season. Gwen told Amy that she seems like an honest artist, and not to get distracted by Pharrell who’s “cute” or Blake who’s “handsome.” Gwen called Amy her dream princess. Amy told Pharrell that she wants to “make a new hybrid” of music. Amy wants to sing crooner type songs. Blake told her that he knows that he’s looking at a super-star. Amy picked Pharrell. 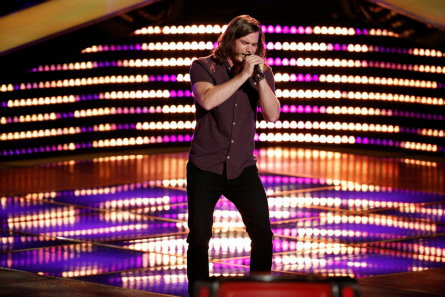 Mitchell is 24-years-old from Fortworth, Texas who likes Alternative Rock. After an injury, he formed a band with his brother and started singing at a honky-tonk bar after his band wasn’t making money. He sang “Drops of Jupiter” for his Blind Audition. Blake and Gwen turned their chairs. Gwen told him it was “incredible” and he’s dynamics. Blake said although it was a rock song, he liked when Blaine’s voice got “raspy and gravely”. Gwen told him she knows all the tricks of the trade and she’s a girl. Blake came back by bragging about his past “The Voice” win trophies. Blaine chose Blake as his coach. 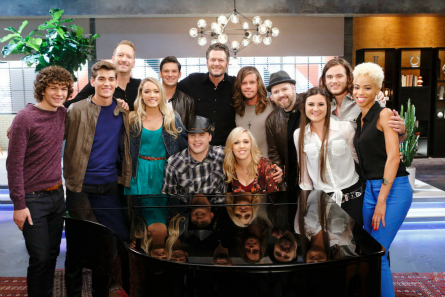 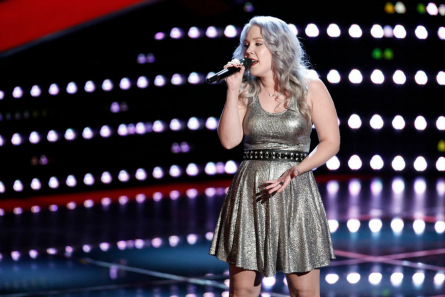 Her grandparents raised her because her mom had drug addiction. At 14 she travled to Nashville and recorded her first album. Her grandparents fully supported her dream of music by selling whatever they could. Summer sang “Strawberry Wine” for her Blind Audition. Gwen and Pharrell who had the only spots left on their teams pushed their buttons to fight over Summer who has a great Country voice. Gwen had only one spot left. Blake complimented her on how hard that song is to do and he was impressed. Pharrell also had one slot left and said she did “some impressive things”. Gwen tried to sway Summer by adding that she is “tight with Blake.” Summer chose Gwen. With that, Gwen’s team was full. 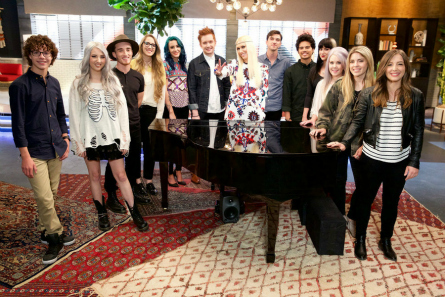 Unfortunately, there are artists who audition in front of the coaches who do not win a chair-turn. On the last night of the Blind Auditions, those artists included Berdine Joseph who is 19 years old from Haiti. Gwen said she sounded like Sia, but something wrong with the “tuning.” Adam said he didn’t push because his team is almost full. Blake advised her to perform as much as she can until she can connect with the song. Pharrell said her voice was “super fly” but needs to select a song that can showcase her vocals better.

Dawson Daugherty also didn’t get any chair turns. He’s a 17-year-old surfer. Dawson took a risk and sang “Problem” with his own spin. Adam said he heard the “youth” in his voice and was “underwhelmed” by the lack of maturity. They all said there was a “breathy” quality in his voice. Pharrell told him to work on the incredible ideas he has voice-wise. Blake said they need to feel like he’s in control.

Caroline Burns, from New Hampshire, is super small (4’11”) with big vocals, but it wasn’t enough to get the last coach left, Pharrell, to turn his chair. Caroline sang “A Thousand Years”. Gwen said she’s going to cry. Pharrell said he has a voice on his team that is like hers and told her to come back and when she does, she’ll get a four-chair turn. Caroline called it the best day of her life.

Pharrell was on a mission to fill the lost slot on his team. Two other artists placed before him were Andy Buckner, whom Pharell told him “less is more,” and Adam Melchor, who Pharrell said was “super-seeding his skill.” None of them made the cut. Then, Sydney Rhame showed-up! 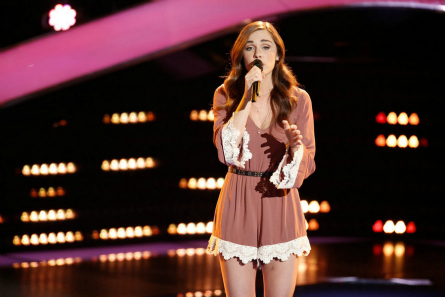 Sydney is 16-years old, and she played her first show when she was eight-years-old. Her parents helped her set-up her gigs, and her dad is why she tried-out for “The Voice”. Sydney sang “Photograph”. Pharrell, the only coach left turned for Sydney. He said he’s here to protect everything that she is. Pharrell had to sit through a number of artists before hearing the last one that he wanted to place on his team to fill his last spot. Inadvertently, that means the rest of the coaches also had to sit through it, Pharrell said “no less than 12 hours” because he wasn’t looking for “good”. He was looking for “great!” She can sing with beautiful dynamics Pharrell said. 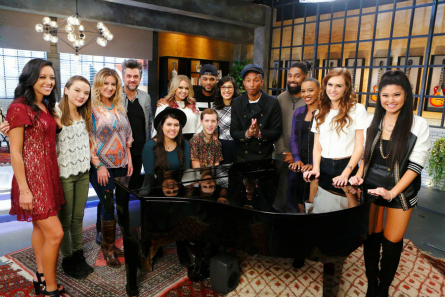 The coaches will bring-in super-talented advisers to help the coaches with their pairings’ battles. Team Blake will have Country star Brad Paisley. Team Adam is bringing John Fogerty who is the famous singer from band “Creedence Clearwater Revival”. Pharrell will have the talent of rapper Missy Elliot to help his team. and Gwen is getting the help of uber talented pop star Selena Gomez.

One of the upcoming battles that viewers can look forward to will be Darius Scott vs. Celeste Betton. Just like last season, during the Battle Rounds, the coaches will be able to steal!