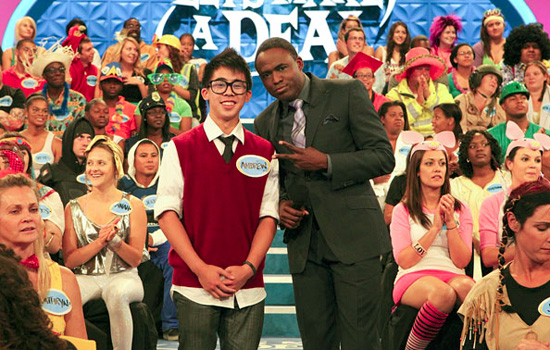 SET NEWS! EXCLUSIVE! Investigative Report!
HOLLYWOOD JUNKET recently attended multiple taped shows of the CBS resurrected classic game show “Let’s Make a Deal” in it’s Hollywood studios. We uncovered what future contestants of the show should expect and some tips given by the staff on how to get picked to play on the show.

It’s the only game show where most of the show is filmed with its cameras facing the audience who get dressed in creative costumes in order to increase their chances of getting picked by host Wayne Brady to play in picking a deal that could win them any of the following: cash, prizes, trips, or a Zonk (non-win). 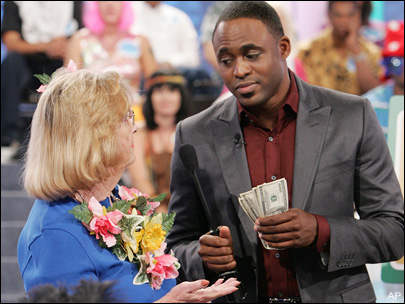 Contestants cash and prizes are on a 6-month hold!

Before even entering the majestic game show set of “Let’s Make a Deal” audience members who are also eligible to become contestants on the show are very quickly interviewed by the show’s casting team in one large room within a trailer on the lot. Audiences are brought forward in front of the casting duo in lines of approximately ten people at a time. They stand in rows as the casting director goes down the line to ask: “where are you from…what do you do for a living…would you choose the cash or curtain?” The whole process of checking-in,interviewing, taking photos which audiences can buy, then waiting. There’s a lot of waiting – takes about 2 hours before show time.

Upon entering the set and once seated, there’s a second layer of preparation done before filming starts, “Let’s Make a Deal” announcer Johnathan Mangum briefs audiences on how the show operates. Mangum gives them helpful advice on how players are chosen. He says they base it on these three things: how well their costume is, their brief interview done by casting, and how energetic they are during the commercial breaks.

The third layer of preparation is done by one of the show’s producers. He states to the audience that they have to be super energetic if they are selected to play and that if the act ungrateful they will be asked to “sit back down”. He stated that in one such incident, a contestant stated that they already had been to a certain destination of a trip that the show was offering and this contestant was asked to take their seat. “We want people that are really excited to be here and that want to play” said the producer.

What many members of the audience contestants don’t know is that their prizes and “cash” winnings can take up to six months to receive! Most of the shows are taped approximately 2-3 months in advance before air dates, and once aired, contestants have to wait 90 days after that to receive their winnings.

I happen to sit next to a woman in the audience whom was chosen by Brady to play. Brady offered her to take either $1000 in cash or what’s behind the curtain. Luckily, the woman chose to keep the cash. When she returned to her seat, she was extremely excited and on a natural high. In disbelief, she counted her money and I could see that it was real cash, not fake money for TV. During the commercial break, a production assistant from the show approached the contestant and told her he would have to collect the cash that she had just won and that she would get it back later. Ummm…right! Try six months later! This is also true for the show’s “Quickie Deals” which are played after all the major games have finished including the “Big Deal of the Day”.

After each episode has completed filming, a crew member gathers all of the players together to fill-out all disclaimers, release forms, legal and tax papers regarding their winnings and being on a televised show.

At the most recent show, an unemployed teacher recently moved to Los Angeles and had some luck at playing. He decided to go for the “Big Deal”. That day, it was announced by one of the producers that the show after that would have a grand prize worth $50,000!

One thing that you don’t want to do as a potential contestant is to wear a trademarked costume. For example, one player came wearing a Batman outfit. This character is associated with DC Comics and is copyrighted. “Let’s Make a Deal” places a big sticker self-titled “Let’s Make a Deal” to cover any signature trademarked logos. Host, Brady referred to this player not as “Batman” but as a character that flys!

“Let’s Make a Deal” films two shows per day. Producers always state that returning contestants from the first show have an increased chance of getting picked to play during the second show. They also don’t have to go through another casting interview or any of the other process shaves about an hour and a half off of the second wait time for the next show.

If you’re in the Los Angeles area and decide to try your luck on “Let’s Make a Deal” prepare to not walk out with cash and prizes the same day, and do expect a lot of time spent there from your day. 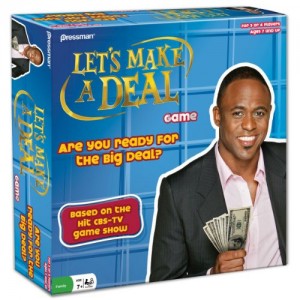 One thing that you can win and not have to wait up to six months to receive is the “Let’s Make a Deal” home game! Just leave us a comment on if you were selected to play if you would choose to take the cash or curtain and why! Best comment wins!