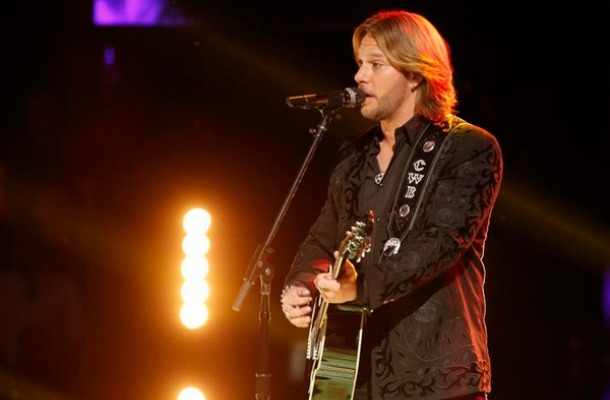 The show kicks off with a performance bringing with all ten finalists together on The Voice stage, for the last time as competotors.

The first solo performance of the night is Team Adam’s Matt McAndrew hits the stage singing Coldplay’s, “Fix You.” Matt’s performance starts intensely then hits high gear as Matt leaps into the crowd, giving Gwen chills. The fans love it, and so do the coaches. “K-ROQ should be calling,” says Pharrell, referring to a local Los Angeles powerhouse “indie rock” radio station. Coach Adam couldn’t be more proud.

Next up is Team Gwen’s Anita Antoinette. Gwen’s brought in none other than Christina Aguilera to advise Anita on her performance of “Let Her Go,” by Passenger. Anita hits the stage dressed to kill in a cool leather jacket and combat boots. She dances across the stage with infectious vitality and the coaches can see that she’s having fun, and this comeback kid doesn’t seem to be slowing down.

Next is Team Adam’s Damien Lawson, singing “You and I,” by Stevie Wonder. Damien puts on a heartfelt live performance, his vocals climbing to new heights receiving a standing ovation from all four coaches.
Next up on stage is Team Blake’s pop prodigy, Reagan James singing “Fancy,” by Iggy Azalea while sparkling in sequins and glitter. Adam points out, this song takes commitment and Reagan pulls it off and coach Blake couldn’t agree more “it’s her best performance yet.”

Next up, Luke Wade sings “Try a Little Tenderness” by Otis Redding. Luke hits the stage cool and collected, that is until the song’s chorus kicks in and Luke is on fire with an epic performance that earns him a standing ovation from Pharrell.

Team Blake’s Craig Wayne Boyd sings “I Walk The Line,” by Johnny Cash. Craig hits the stage and immediately takes control working the song for all its power, showcasing his rich baritone. Craig’s performance has all four coaches standing up and Blake Shelton declares it “magic.”

Next is Team Gwen’s Ryan Sill singing “Starlight” by Muse. After being in the bottom three and receiving an instant save last week, Ryan is dead set on redemption tonight armed with tips from Gwen and advisor Christina Aguilera, Ryan puts on a powerhouse performance receiving roars of approval from the crowd and coaches.

Up next is Team Gwen’s DaNica Shirey singing “I Have Nothing,” by Whitney Houston. On stage, DaNica doesn’t even have to move, her voice does it all for her with a simply stunning performance that Blake declares it the best he’s seen and coach Gwen wishes DaNica could give an encore.

Next up is Team Gwen’s Taylor John Williams, singing “Come Together,” by The Beatles. On stage Taylor might be singing a Beatles song, but he struts across the stage like a rolling stone. Gwen admits she was worried about Taylor’s song choice, but tonight he shows the coaches his rock star side. “If I was fifteen, in high school right now, you would be all over my locker,” says Gwen.

The last performance of the night is by Team Adam’s Chris Jamison singing “Uptown Funk,” by Mark Ronson. During rehearsal, Adam and advisor, Patrick Stump, urge him to inject a little attitude into his act, and Adam shows him how it’s done. Chris gets the message, getting funky on stage amidst flashing strobe lights, it’s a spectacular performance that left the audience screaming and all the coaches are impressed.