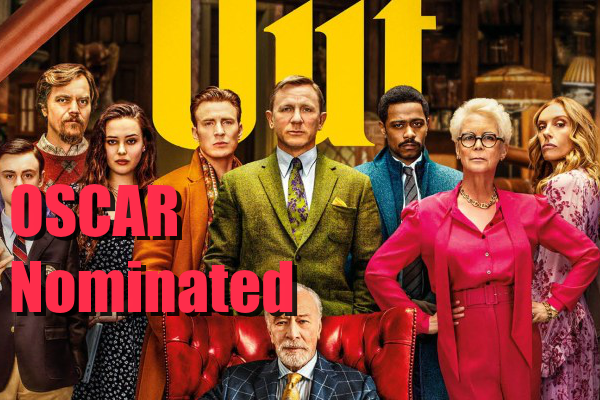 “It was important that the movie have good heart.” – Rian Johnson

“Knives Out” is nominated for an Academy Award this year for Best Original Screenplay.   Rian Johnson is also known for his directing of Star Wars: Episode VIII – The Last Jedi, and recently has announced  a “Knives Out 2,” where Daniel Craig is set to return.

Johnson said “Knives Out” is turning the who done it into a movie.  Turn it into a Hitchcock thriller, back into a who done it.  You get to have your donut and eat it too.  Coming-up with the donut speech that Daniel Craig’s character dove into, Rian Johnson said he approached it as “it wasn’t a think of it first and foremost not as a puzzle.   But as a dramatic story is a satisfying story.   The really satisfying thing is having Marta at the top and the family at the bottom at the end.  There’s a lot of movies tackling economic inequality.  Why?  “There’s something in the air.  It was important that the movie have good heart.

If you make choices for the right reasons, “you’re good to the person in front of you.”  How the story comes? Johnson answered, “I’m a really good structural writer. It becomes its own shape. I do a lot of planning before writing.  I do a whole road map before I start writing.  There’s stuff that changes on set.  Yet, you have to be open to that.”   Chris Evans has a great bullshit radar and “has a really fine tuner sensor to that.”  Johnson said it’s because of all the Marvel movies Evans has done.

The Marta character was the most work that went into because she’s at the center.  He had really fun writing Detective Benoit Blanc.   The last thirty minutes in the library, Daniel Craig had the speech stone cold down.  The whole speech!  Johnson noted that “the longer I could let him go without cutting, the better he was.  He stopped adjusting for his shot.

Johnson stated that just doing your work as a storyteller is the most important.  Though he admitted “I story board really badly.”  He said he luckily worked with the artist who did the story boards for “Parasite.”  They were beautiful.  I do need a plan when I show-up on set.  He collaborated with costume design.  He said the costume designer made each person as distinct as pieces in Clue board.

Set decorator David Schlesinger found the house that they used for the movie and all the stuff to dress the house  He convinced people to let them borrow their collections for filming.  The moderator of this Q&A suggested to Johnson that there be a “Knives Out” clue board game.

Johnson worked with casting director Mary.  The relationship with casting director, it was who would be the most fun casting these parts.  Mary was the one who cast (with real passion) for Ana de Armas (Marta Cabrera).  Mary had seen Ana come in and read for other things.  She knew that there was something really special about Ana.

Johnson’s best friend Noah Segan has been in all of his movies.  He has an Enthusiasm that’s infectious.  The subject of family inheritance is one thing Johnson loves about Agatha Christie.  The ‘who done it’s are really good about talking about Class.  There’s a power structure within that.  The inheritance plays into that.  “It’s part of the mechanics of this really fun ride,” said Johnson.

Johnson made a Star Wars movie that had puppeteer Frank Oz in it.  He performs Yoda.  Oz made an appearance in “Knives Out” as Alan Stevens who read the will.  At what point did he decide the character Marta would vomit when not speaking the truth?  He said it started with just a story decision.  In the Hitchcock tradition she is the character we care about.  You take the characters you like the most, and make life hard,” thus, vomiting when she lies stated Johnson.

Johnson was asked what was the reason why Michael Shannon’s character (Walt Thrombey) had a cane.  Johnson answered “I deleted the scene that explained why he had the cane.”  Another question, were there any twists he had to edit-out?  Johnson said there was one scene with Joni and Daniel Craig were Craig has a rash on his neck.  He said it was from one of her skin care products.  In his research he discovers that her company was broke.  Johnson stated that it was too much like Joni’s company “Flam” vs. Goop, which it the real company of  Gwyneth Paltrow.