SO YOU THINK YOU CAN DANCE: Season 9 Judges Preview! 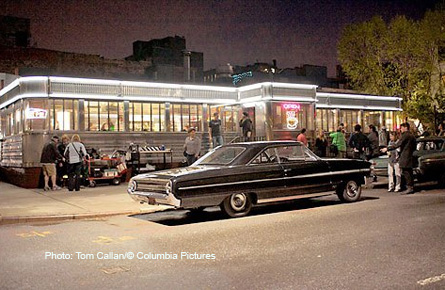 “Men in Black” jumps time frames – how the VFX team handled it, Redd stated that director Barrry Sonnenfeld “didn’t want to hit you over the head with it. He just wanted to make the world look a little different”. In the time jump, Redd said they had to deal with taking-out the modern-day items for 1960’s and getting rid of glass and steel buildings for 1930s version of New York. He explained that all neon signs had to go due to the monocycle scene. “We thought that there was going to be a lot more work to do to make the film period. But, great locations and good designs” Redd expressed made it easier.

Gadgets such as the mono-cycle, Redd said that there’s digital versions of actors in the scene as well as all digital streets and period cars. “When you’re moving the camera down the street you pull the real cars out so you can drive the camera down and say well later ‘we’ll put some cars in there”.

The movie is very stylized like all of Sonnefeld’s movied said Ralston, and the movie is “not trying to be real.” He also stated that the thing that gives headaches in 3D is the rapid depth changes “that kill you”. So, the VFX team has to orchestrate it in a way that moves viewers through the world of 3D that doesn’t “hurt them”, but he admits, that sometimes they have to hurt the audience “the point of a scene is being hurt”- such as the scene with the lasers in the electronics store. “Real to me is boring” said Rolsten.

The most challenging scene for Ralston and his team he said was the time jump scene when Will Smith is falling off of the building and trying to grab the time device. Working with only the building, there were no other distractions for the audience in the scene, thus nothing to “hide too much with” said Ralston. “It was hard to make. That shot took the longest. From the roughing out of the ideas to the finishing took roughly a year”, recollects Ralston.