Milestone Win on AMERICA’S GOT TALENT Season 15, Sign of the Times!

Milestone Win on AMERICA’S GOT TALENT Season 15, Sign of the Times!

Spoken word artist Brandon Leake said an art form that has not been on the mainstream ever. Winning AGT is a big deal...MORE

Out of the final ten acts on “America’s Got Talent” season 15 Finale, one was revealed to be the winner of grand prizes of $1 million and a headline show at the Luxor in Las Vegas.  But, before America got to find out who won this season, viewers had three hours of finale show to sit through first.  Performances by six of the finalist singers included collaborations with super-star vocalists. The four non-singer Finalists got collabs of their own as well.

Celebrity performances came from  Usher who opened the show, then  Blake Shelton, Ava Max, Bishop Briggs, Julia Michales, One Republic, Marvin Winans, and JP Saxe who all joined finalists in their Finale performances.

The first hour included a quick recap of the season 15 judges. Sofia compared the experience of joining the judges panel to like being in a new school.  She recapped the time when she fell in the front row of the audience while trying to escape from an obnoxious act.  She called it one of the best years in her career.  Heidi said although 2020 was a lot of crazy things, they made it work.

Then, each of the ten acts was recapped.   First up was Archie Williams, incarcerated for 37 years for a crime he did not commit. “Freedom is of the mind, I went to prison, but I never let my mind go to prison,” stated Archie.   Cristina Rae said she didn’t know that Heidi was talking about the Golden Buzzer when she pushed it.  All the judges went on stage to congratulate Cristina.  The Bello Sisters were next.  In their audition, they explained that they’d like to perform with their dad in Las Vegas.  “I think that many times, people underestimate the strength of women,” they said.  Broken Roots met in July 2019, and the first time they performed together was on stage at AGT!  They rehearsed twice before then.  Broken Roots was cut in Judge Cuts, then brought back later as a Wild Card act.  Now they’re in the Finals and performed with Country star Blake Shelton. 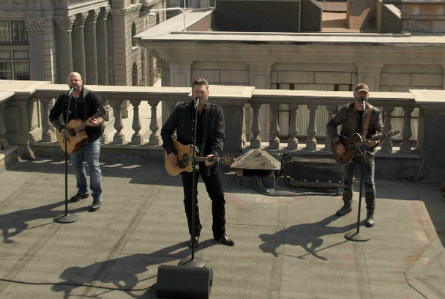 Pictured in this screen grab: Broken Roots and Blake Shelton — Photo by: NBC

Sofia’s Golden Buzzer was next – Roberta Battaglia.  “It was the most amazing moment I’ll probably have in my life,” stated Roberta.   Alan Silva’s brother is part of “Danger Games” a past contestant on AGT.  Alan’s kids had never seen him perform before auditioning for AGT.  “You are without question the best act we’ve seen all day long,” said Simon Cowell.   “If I win AGT it will change MY life and change my kids life forever” said Alan.  He performed with his brother for his final performance.

There’s never been a poet on AGT before Brandon Leake competed this season.   Brandon said he auditioned for AGT  “to show my art and my skill to the world the way that my local coffee shop will never be able to give me.”  Simon’s reaction was that “It was extraordinary. ”  Howie told Brandon that he moved him “to do this” as he pressed the Golden Buzzer.   Daneliya Tuleshova was shaking a lot before her AGT audition.  “There’s something about her…unforgettable.”  Daneliya stated, “I realize how big is my desire to sing onstage.”

Bad Salsa explained “Bad” is an acronym.  “Bad Salsa, is badass Salsa” said Heidi.  Simon told them “without people like you, we have no show.”  Kenadi Dodds’ family has an eye disease where they lose their sight.  Her sister wanted to see her sing before she lost her sight.  “Being on America’s Got Talent has been life changing,” said Kenadi.”

Usher was the first live celebrity performance of the night in the second hour of the show.  Host Terry Crews announced Usher will have a residency at Caesars Palace in Las Vegas next year.   The next celebrity performance was a mash-up with AGT finalist Cristina Rae who sang with Ryan Tedder from One Republic.

Similar to “The Voice,” last season on how they handled collab performances during the pandemic, AGT finalists performed Bill Wither’s classic “Lean on Me ” separately from their homes, together.  Even the non-singers – Bad Salsa, Bello Sisters, Alan Silva, and Brandon Leake with a spoken word addition, joined-in.

In 2016 Deadly Games competed on AGT.  Producers of the show decided to put together the Bello Sisters with Deadly Games and Alan Silva as Bishop Briggs performed “River” song on the Universal Studios back lot.  Next, Archie Williams performed inside a sound stage with Minister Marvin Winans along with other gospel singers.  Winans inspired Archie in prison so much so that the name “Winans” became Archie’s nick-name.  Afterwards, Archie was overwhelmed with emotion.

Then, a big surprise!  Meghan Markle, Duchess of Susse, sent Archie a special video message “we are proud of you.  We are rooting for you and we can’t wait to see what you do.   We’re in your corner.”  The next super-star to hit the stage was Ava Max who performed with Daneliya Tuleshova while distancing from each other on stage. 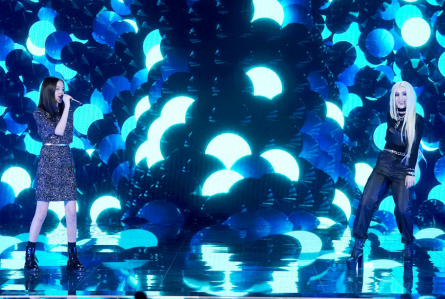 Crew’s Golden Buzzer act from last season, “Detroit Youth Choir” returned with a performance filmed in downtown Los Angeles.  Before that, a video package was aired showcasing how much AGT has changed their lives.  When they returned to their home in Detroit they were presented with a check for $1 million along with a key to the city.  Another milestone for them was performing with John Legend.

Broken Roots sang with Country artist and “The Voice” coach Blake Shelton.  They sang Shelton’s song “God’s Country.”   The next collab was India acts finalists Bad Salsa with last season’s V. Unbeatable performed together.
Songwriters JP Saxe and Julia Michaels performed “If the World Was Ending” with Finalists Kenadi Dodds and Roberta Battaglia. Finally, in the second hour, we got to hear which act would be America’s AGT winner this year.

The act coming in fifth place was Alan Silva.  He said “it means the world.” and he feels like a winner already. Heidi reacted that he IS a winner and they have all fallen in love with him, and “we will all never forget you” Heidi finished and blew him a kiss.  The act coming in fourth place was revealed to be Roberta Battaglia.  She reacted that being on AGT meant so much for her and she said “it’s only the beginning for her” Sofia said Roberta was such a treat to have her there.   Sofia said at 11-years-old is nothing and “the world is about to open up to you.” 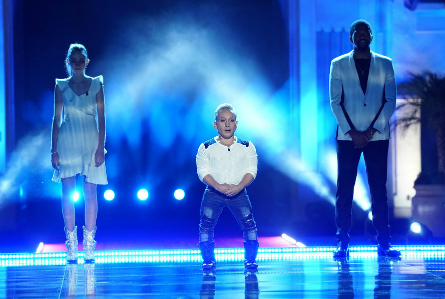 The remaining acts were: Cristina Rae, Broken Roots, and Brandon Leake.  The act coming in third place was Cristina Rae.  She thanked Heidi and said her “baby” (Jeremiah) is going to be on AGT and he’s going to win.  Heidi reacted   “you are a winner in my heart and you are a  true talent.”  Heidi added that she expects to hear Cristina on the radio.

Crews asked the two acts what it means to win AGT and the $1 million prize.  Broken Roots said winning would mean a lot for their families and they’ll be able to open a music school.  Spoken word artist Brandon Leake said an art form that has not been on the mainstream ever.  Winning AGT is a big deal.

Brandon Leake was revealed as the AGT winner of season 15. He thanked America. Crews reacted “what a ride it’s been this season!” And they’ll be back for more next season!