Frankenstein, Pink Elephant, and Octopus. No, they’re not the names of comic book villains, but the names of new games which are villainous to the contestants trying to overcome them in their quest to win the ultimate, and still unobtainable $1 million on NBC game show “Minute to Win It”.

The show just wrapped its third installment of tapings on Friday, May 21st in Studio City with some new rules and other changes in an effort, so it seems, to make a contestant a millionaire. This has not been confirmed by show producers, just simply a speculation.

For starters, there are two more levels in which a contestant may bank their money if they should fail proceeding games. Contestants can now pocket their $1000 winnings, $50,000 (was always the case) and now $250,000. “Minute to Win It” also introduces a way of playing with two players at a time some of whom are twins. The rules for this are, no one player out of the two may play more than three games back-to-back. After the third game, their partner must play the next one no matter what. This rule caused for much discussion for strategies and anxiety on stage. 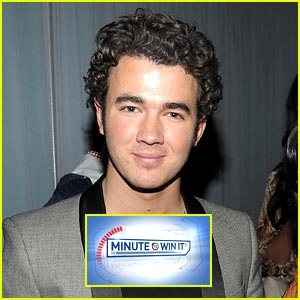 Will a new contestant top highest winner, Kevin Jonas’ on “Minute to Win It”? Tune into the show to find out!

One such pair of contestants were strangers, and one of them got the surprise on stage! This particular situation was very similar to GSN’s “Money List” where two strangers had to work together to complete lists of a variety of pop culture, then split the winnnings.

After witnessing one pair of contestants game in which they didn’t do so well, their families reaction made me wonder if “Minute to Win It” will be faced with letting a contestant re-appear on the show again to play, this time, by themselves. I’m sure there will be a lawyer to find a loop-hole somewhere.

So far, the most exciting and best episode consists of two male twins. This episode includes a proposal and a lot of messy on-stage antics. These twins have also played the daytime version of “Deal or No Deal”. .

“Minute to Win It” continues to explore contestants back-stories and ignite on-stage drama brought about by reunions of family members. Very similar to “Deal or No Deal”. This will either help the show or hurt it. I guess it’s just not good enough anymore for a game show to be just a game show a game show. Host, Guy Fieri introduces the show to audiences in the studio before each show taping by stating “it’s not a game show, it’s a life-changing show”.

Other surprises viewers can look forward to are, the return of “Minute to Win It” first highest winner, Blake, and a contestant who topped Kevin Jonas’ winnings!

Some new games have been added to the show. Fieri stated that there are now 85 games in the “Minute to Win It” game library. We counted 69 that are currently on the show’s website. This will surely be updated by their webmaster soon. But, in the meantime, HOLLYWOOD JUNKET is here to help prospective contestants out by providing this sneak-peek to some of the new games we saw in action that the “game wizards” have created:

OCTOPUS: Player must pull streamers from underneath water-filled “Fiji” water bottles without the bottles falling. DROP BALL: Player must remove water-filled “Fiji” water bottles placed atop of water cooler empty jugs while dropping one golf ball sitting on top of the “Fiji” bottles into the empty jugs. PINK ELEPHANT: Player must toss a red slinky to sit directly onto their forehead without the use of their hands. STICKY PICKER-UPPER: Player must roll one egg on a platter to pick-up three stickers. Finally, the most challenging game yet is FRANKENSTEIN: Player must balance three separate wooden rulers holding two batteries, one at each end on their forearms and successfully carry all three back to the starting place.