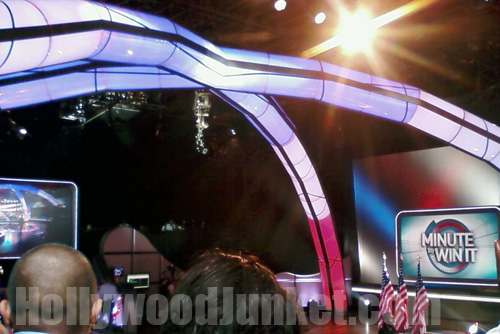 When “Minute To Win It” first came onto the game-show scene, it was strictly a physical and mind strategic challenge show with some glitz. Fog machines and the show’s own game show models (“agents”) regularly graced the stage. On the surface, I didn’t expect much from the show. It’s future- questionable. Soon after, however, the show started to evolve into something of more substance. Away went the fog, and the models. The show stripped itself to the bare minimum – host Guy Fieri, a basic stage, and basic props used for game-play. Then, another series a tapings showed another evolution of “Minute To Win It” as it began to team-up a number of different contestants at a time. Some relatives, some co-workers, best friends, and even complete strangers.

As the show started to reveal contestant’s back-stories, I could see a little bit of another NBC game show, “Deal or No Deal” resonating quietly in this one. DEAL’ was best-known for giving contestants the chance to win unbelievable amounts of life-changing money. The same is true with “Minute to Win It”. “Deal or No Deal” also presented very heart-felt stories of contestants while bringing onto the stage their relatives, mentors, or celebrity idols. The first episode where it was evident that “Minute to Win It” was slowly turning into the new “Deal or No Deal” was with a twins episode of two athletic twin sister contestants. They looked to their coach father, whom, they thought could not make it to their show taping, for motivation. As Fieri presented a pre-taped video message of their father talking to them on the show’s big screen, cameras caught close-ups of the twins’ teary eyes. Then, another surprise, their father came out onto the stage to motivate them in-person.

Well, this seemed a lot like the emotional heart-pulling strings that “Deal or No Deal” used on so many of their episodes. But, I wasn’t certain until I sat-in on the taping of the Veterans episode which airs September 14th (8-9 p.m. ET).

In this episode, two leg amputee Iraqi War veterans Ed Salau and Andy Butterworth team-up together to battle for the $1 million. The audience is sprinkled heavily with members from the Armed Forces. Salau and Butteroworth stunt challenges are: Sticky Balls, Super Coin, Snap Crackle and Topple, Marbles Grande, Egg Tower, and Mouth-to-Mouth.

On this episode, once the water-works start, they don’t stop. A significant person in their lives is brought onto the stage to encourage them. This visit also serves as a reunion. After seeing this episode, there’s no doubt in my mind that this game show has become the new DEAL’.