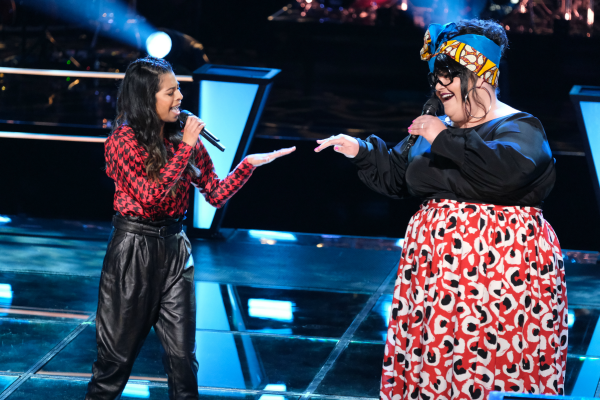 The last night of “The Voice” season 17 Blind Auditions blended into the first night of the Battle Rounds in Monday’s episode.  After Teams were full, it was time for the coaches to put their artists through the ringer to see what they were really made of.

Moving-on to Tuesday’s Battle rounds, the coaches prepared their artists with their advisers to see which one would fight for it the most, creating great moments along the way.  This for sure was the result in the last Battle of the night from Team Legend.

Team Kelly, with the help of Adviser Normani, had the first Battle of the night.  Kelly said pairing singers for the Battles is “the hardest because you think you know what kind of vocalist they are.”  Her first pairing of the night was Alex Guthrie vs. Injoy Fountain.  She paired the two because they are both soulful singers.   Kelly gave them the song “Home.”  Alex stated that “Home” is one if the first Bluesy, Swampy songs he learned.

Alex appeared a little bit intimidated by Injoy when she sang during their rehearsals.  Normani said Injoy is definitely “a star” and has charisma. She said Alex is very soulful with an old school funk.  Injoy said Alex has so many tricks and tools up his sleeve that it makes her step-up to the plate.  While advising her Team, Kelly told Injoy and Alex that “the Battles are about having a really great moment….Create a really great moment that people remember.”  Kelly said she’s looking at who’s a little bit more bold than the other one.

After their Battle, Blake told Alex he could have been a bit more aggressive with his approach.  He called Injoy’s personality infectious.  On the contrary, John told Alex he’s a strong singer but didn’t get a glimpse of his personality as a vocalist.  He loved everything about Injoy.  Gwen said she was taken-back by Alex and DID hear the personality in his voice.  She thought he gave a good Battle and was “taking charge of the stage.”  Coach Kelly told Alex he loves his highs and lows.  Kelly picked the one who she thought would “round-off” her Team.  That was Alex.

Gwen brought-in Will-i-am of the group Black-Eyed-Peas who she toured with, with No Doubt.  Will.i.am said it was one of his first tours.  Will.i.am is a coach on “The Voice U.K.” for eight years.  Gwen paired Elise Azkoul and Myracle Holloway  who sang “breathin” song by Ariana Grande.
Elise is a vocal coach who’s excited to be coached by Gwen and Will.i.am. Will.i.am noted that Elise doesn’t realize “how awesome her voice is.”   He called Myracle’s voice “amazing” and his heart broke.  Gwen told Myracle that she’s so in touch with her emotions.   Will.i.am and Gwen both advised the two singers to “own it” when they’re up on the stage which will determine who will win.

After their Battle, Kelly said that is a difficult song that they sang it beautifully.  she was impressed with Elise’s control and thinks she has a gift.  Kelly said with Myracle, it doesn’t sound like Mary J. Blige,  it FEELS like Mary J. Blige. It’s pure heart and you cant’ teach that.  Blake said they both had some “really great moments.”  With Myracle there were maybe some times in her life in that past that weren’t so great and they heard that in her voice.  He went with Myracle.  John said he felt a lot of emotion coming from both of them  He especially liked the run that Elise did.  But, wants Myracle to take more risks because he loves her tone.

Coach Gwen told Myracle she’s not wasting her pain and it’s so inspiring.  “I don’t know what to do.” Gwen ultimately chose MYRACLE as the winner because ‘she really moves people and she has a special gift.”

More pairings of the night were: Matt New vs. Max Boyle (Team Legend) who sang “Let Me Love You.” John said Max vice is exciting.  It was a legit hard decision for him.  John chose MAX BOYLE as the Battle Winner.

John Legend had former ‘Voice coach and R&B star Usher as his Adviser.   He paired Katie Kadan vs. Destiny Rayne.  John and Usher chose “Tiny Dancer” by Elton John.  He said the song has moments of big power and tender moments.
Katie faned-out over Usher whom she had a crush one as a little girl, and apparently still does.  Katie is in five bands and says she got a late start.  She thought she never looked that part, but is no longer insecure.  Katie was a four-chair-turn. But, Blake Blocked Kelly.

Destiny is recently engaged. She works two jobs in Nashville and has a tough time juggling it all.  John said Katie has a “bigger voice. She is special.”  He said their voices are “extremely different.” But, both sound confident in their spaces.  Usher suggested to them to hold out a note longer.  He advised Destiny to give him more personality.  “Those little moments are what makes it personable to me,” said Usher.   Usher predicted it will be his favorite performance and “will be the moment of the night.”  John also stated it’s his favorite performance.

After their Battle, Gwen noted that they got the room riled-up and Kelly said it’s the first time all the coaches stood-up and clapped. Gwen said Katie is a presence and her tone is hard to believe it’s a real voice. Destiny stood her own and amazing to watch her grow through the performance.  Kelly reacted “man, that was real good.'” John called it “spiritual.’  Kelly loved how Katie showed restraint and Destiny “killed it.”  Blake said Katie’s voice is “an eruption.” But, Destiny rising to the occasion is what made it a great duet, and that’s why everyone stood up.

Coach John called it thrilling to watch and America is happy to witness it on stage.  He said he had no idea Destiny would deliver like that, and Katie belongs making records.   He chose KATIE KADAN as the Battle winner. John said her voice is so rich and powerful.  She’s a super-star and no way he wasn’t going to pick her.

STEAL: Blake, Gwen.  John had already used his Save, so told Destiny he couldn’t use it now.  Blake said Destiny stepped-up and blew the roof off the place.  Blake said he’s won more than Gwen’s been a coach on the show.  Gwen said maybe he’s won more, but she’s had the longest career.  Gwen said”it’s not just about this show, it’s a life choice!”
Coach – GWEN