“The Tonight Show” host Jimmy Fallon’s sketch game show “That’s My Jam” translated into a full hour long prime time show so well last year that it’s back for a second season with only a couple of changes.  The regular season starts in March, 2023.  Before that, viewers can catch a special Holiday edition airing December 5th.

Hollywood Junket was on the set of “That’s My Jam” for multiple tapings this season.  We have a list of some of the celebrities viewers can expect to see.  In one episode, Kelsea Ballerini and singer songwriter Julia Michaels team up to go against Jason Derulo and Nicole Scherzinger.  Keke Palmer and Saweetie play against will.i.am and Joel McHale.  The Bailey sisters are in another episode playing on opposing teams.  Halle Bailey was partnered with actor Simu Liu going head-to-head against her sister Chloe Bailey who was paired with singer Adam Lambert (former “American Idol” contestant).

Some of the best performances came from Jason Derulo and Nicole Scherzinger  Jason had to perform “Thong Song” in an Opera style.  Roses were given to front seat audience members to throw on the stage when Derulo’s performance ended.  Let’s just say those roses were well deserved because he did a fantastic job!

Then there was a game show faux pas where Julia Michaels was given two of her own songs!  But, since it’s not really a game show?? In a game of “Opposites Attract” a contestant (Julia Michaels in this case) is given two songs where she had to sing the lyrics of one song over the music to a different song in the round called “Impossible Karaoke.” Julia Michaels had to sing “Sorry” by Justin Bieber over “Sorry Not Sorry” by Demi Lovato style.  She said she wrote both of those songs!

Chole and Halle had a showdown in “Mixtape Medley.”  The Doom Box announced the winning team of that round.  Simu Liu had a group of fans in the audience who were repeatedly cheering him on throughout the game.  He absolutely nailed his “Impossible Karaoke” challenge where he had to sing a rap song in the Country genre!

New games this season include “Mega Mix Showdown” which is part of the “Impossible Karaoke” round, and “Turn the Beat Around.”Other returning games include: “Disco Charade”, “Perfect Mashups” and “Get Outta My Face.”

Also new this season, each round is introduced by contestants that sing with the band which is headed by Adam Blackstone.

“That’s My Jam: Holiday Edition” features celebrity guests who are all veterans of “Saturday Night Live.”  One team consists of Fred Armisten and Ana Gasteyer who are playing against Rachel Dratch and Melissa Villasenor.  All celebrities play for their own chosen charities. 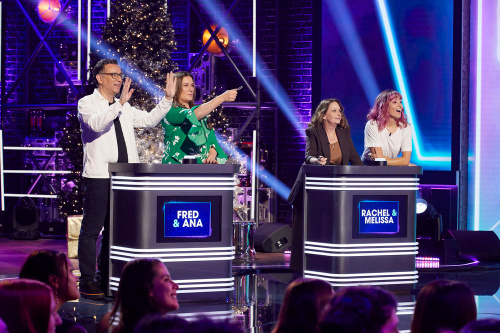 Their first game is a brand new one!  It’s called “Turn the Beat Around” where Jimmy Fallon dresses-up as a German Rock character who’s moderating the game. It’s a bit of a tricky game that has two contestants from each team standing on two large turntables facing each other as the spin.  As different songs play, their partners (who wear noise cancelling headphones)  must guess the titles of the songs based on physical clues given by their partners.  Each song guessed correctly is worth 1000 points.  Some of the songs they had to guess included: “Baby Shark,” “Firework” and “Y.M.C.A.” 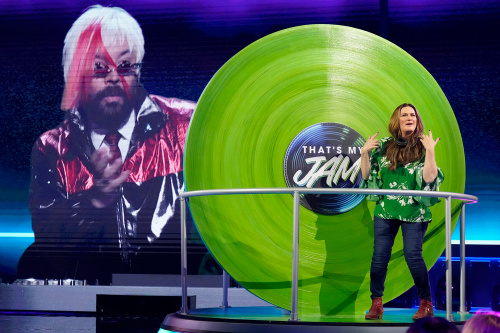 The second game in the episode was called “Undercover Covers” which this time featured some well-known musicians.  In this round, the players must choose a musician based on their silhouettes to come out and play a song in their own unique style with their instrument, then the contestants must guess the song by writing down their guess on a digital screen.  The writing on a digital screen part was a challenging task for Fred and Ana.  Some of the songs they had to guess were “Jingle Bell Rock” and “It’s Not Unusual.”

The first team to write down the correct answer and lock it in gets 1000 points.  “The Blue Man Group” who Jimmy ended up choosing in the final round for the contestants were on the show.  They also made an appearance on “The Masked Singer” in the most recent season.  The contestants also got a bonus song in the final round that was worth 5000 points.

One of the most fun games on the show is “More Than a Feeling.”  This is when contestants have to put their hands inside a box that holds objects that represent a song or artist and they must guess based off of what the objects are.  Jimmy Fallon tried to scare the contestants with big reactions to the box contents and he also told them that the box has “unknown and possibly dangerous things!”

In some of the upcoming episodes, the objects are actually pretty cringy.  In the UK version of the show, which Hollywood Junket attended several tapings, the boxes actually contained dead beetles in one of the episodes!

Each team places their hands inside of the boxes at the same time and have forty-five seconds.  Whoever yells out the correct answer first, wins 1000 points.  In round two of the game, both teams got the same exact objects in their boxes and they guessed at the same time from separate boxes.  It was around this time that Ana Gasteyer said she wanted to apologize to her charity (for coming in behind up to that point).  In the final round, all four contestants put their hands in one large box.  Whomever guesses correctly first wins 5000 points.

Suddenly, by the fourth round, the stakes go up very high!  “The Wheel of Impossible Karaoke” is worth a whopping 50,000 points!  The winner of this round is chosen by a huge boombox named “Doombox” who also talks to them.  He told the players that he didn’t know if he’s feeling “naughty or nice.”

Each contestant had to pull a lever to a casino style slot machine which rolls up various choices and where it lands is the game that they get.  Rachel was first and she got “Nonsense Karaoke.”  She had to sing a well known song with lyrics that had been replaced with gibberish.  Those lyrics appear on a screen (off camera)  in front of her as she sings.   Host Fallon always pulls the lever the second time for contestants to reveal which song they would get.

When it was Fred’s turn to pull the lever, he got “Musical Genre Challenge” which meant he had a song title in a totally different music genre and he had to sing that song in that style. Jimmy pulled the lever to see what it would be.  It landed on “Old Town Road” by Lil Nas X in Classic Punk genre.  Ana pulled the lever next.  She also got “Musical Genre Challenge.”  She got “Blank Space” by Taylor Swift in Holiday Jazz genre. 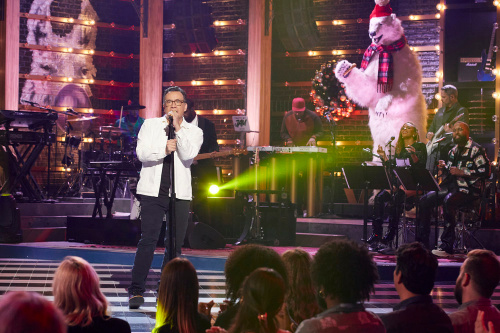 These games are all fun and good, which offer tons of entertainment.  But, it’s also the part in the show where we have to wonder if it’s more entertainment than a game show.  Because it’s just too hard to believe that these celebrities aren’t given the chance to prepare and rehearse these songs beforehand.  Much in the same way that “The Masked Singer” does it.  It’s still a game show, but they definitely get to rehearse their performances multiple times.  I’m guessing that it’s the same here.

Melissa got “Wheel of Musical Impressions” when it was her turn.  This required her to get an artist chosen for her by the spin then sing the song while impersonating that artist.  And, because she’s such a great impressionist, wouldn’t you know she got “Uptown Funk” where she had to do a “medley of impressions.”  That meant she had to sing that song in multiple different artists’ voices.

This was a lot of fun for sure.  Some of those artists she had to impersonate included: Dolly Parton, Julie Andrews, Christina Aguilera!  She knocked it out of the park, and the studio audience gave her a standing ovation while screaming and yelling.   But, when it was Doombox’s time to choose a winner, I don’t think he made a popular choice! 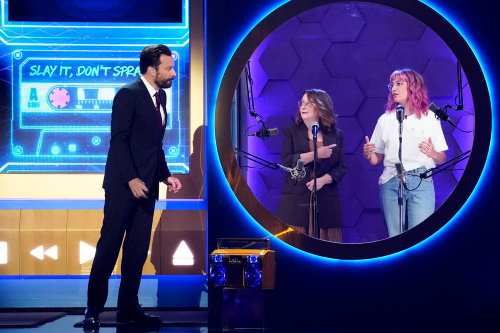 In this round, celebrity contestants step inside glass booths inside of the Doombox.  It’s here where they have to sing a song as the lyrics are presented to them on a monitor.  When the lyrics stop being displayed on the screen, they must continue singing the lyrics to the song correctly.  If they get it wrong, they get sprayed by water that sprays out of their microphones.  If they get it right, their opponents get sprayed.

One major difference this season is the addition of two very large microphones which descend from the booth they are in during this game and spray a ton of water on them in that final round.  The winning team gets to take home boombox trophies!