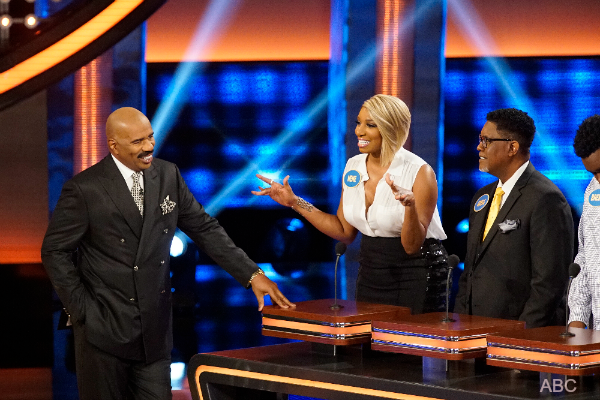 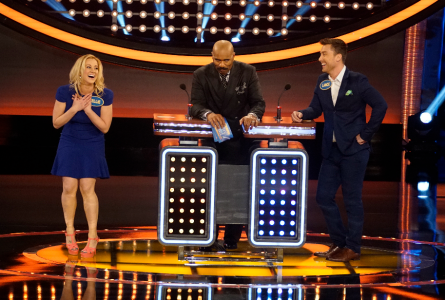 During Team Kellie vs. Team Lance’s game, the two played head-to-head to fill the answers for “name something specific your man is allowed to do to your behind.” Kellie rushed to hit the button, but completely missed, hitting the counter instead. Lance’s answer of “pinch” came in at number six on the board. Makes you wonder what was more popular than that. Kellie played with her answer of “slap/spank”. 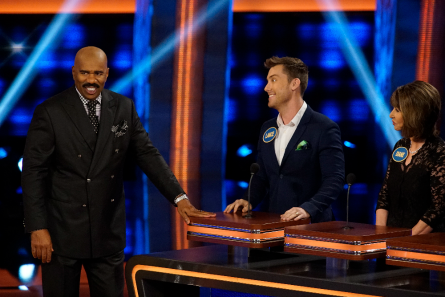 In another survey, the Bass family had to play for “name something Steve Harvey would look extra sexy in!” Lol! Lance’s husband, Michael, answered “nothing.” Oops, sorry, that wasn’t on the board. Next, the Pickler family gave it a shot. Kellie answered ‘boxers” – with all due respect to Harvey’s wife, she noted. The answer was on the board under “undies/gold thong”. The show may have been having a bit of fun with host Harvey by adding the “gold thong” part. Other answers on the board included: “bikini/mankini” and “suit tie/tux”. 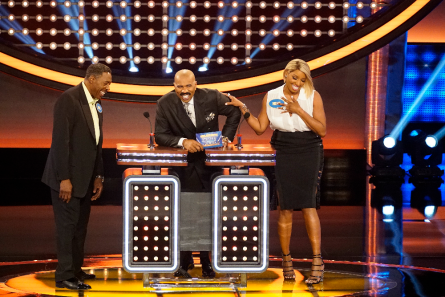 The Pickler family won their game. Kellie and her sister Courtney played in the Fast Money round. Luckily, Courtney gave enough of the number one answers that when it was Kellie’s turn, she only needed to get 63 points. Kellie barely got the points after being very distracted with the question and wanted to keep talking-out the answers. Their monetary win win to the USO charity. Harvey was a pro at helping to guide her to finish the answers.

The next game was played by Nene Leakes family vs. Ernie Hudson family. Two sons from each family had to answer correctly to play for “name something you just can’t get enough of”. Nene’s son was trying to be good with the answer “love”. That wasn’t there, but “sex” was! Answered by Hudson’s son. They accepted to play for the rest of the answers. Ernie Hudson told Steve Harvey that it took “Family Feud” to bring them all together. Ernie answered “freedom”. Harvey stated “I thought we was free.” 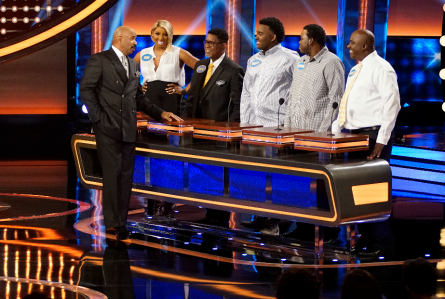 The Leakes family won their play for a bit of a racy survey question – “name something you like someone to do to you from your head to your toes.” Nene’s son answered “hold me.” Host Harvey teased “you like the way your mama hold you!” It was there on the board along with other answers “message/rub”, “love/admire”.

Harvey saw this one coming, the answers took a turn for some uncomfortable moments – mostly for mom Nene Leakes when her son Brentt answered “lick me”. He first asked if his mom could cover her ears. Nene’s expression went from smiling to all serious. Harvey stated he was “baffled” as to why that answer wasn’t number one on the board.

After the Leakes received three strikes, the Hudson family stole the game with the answer “wash me.” It was the last survey that perplexed the Leakes the most. It was to “name the sports ball that would best cover your man’s manhood”. The Leakes gave answers: Football, basketball, soccer ball and volleyball. But, got stumped when nothing else worked. The Hudson’s came in for the steal and won the game with bowling ball. Surprisingly, some of the answers on the board were marble, and cue ball!

The Hudson’s won their Fast Money round by a landslide after two of Ernie’s sons played. The first son, Ross scored an impressive 186 points, and Ernie Jr. only needed 14 points to pull them through. Of course, he did with the first answer.