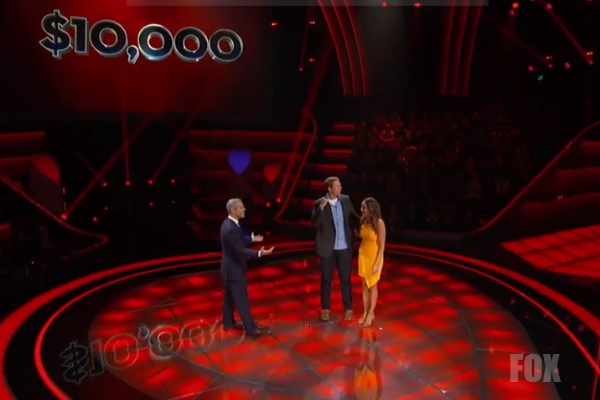 One old rule is out which has changed the game a bit. But, the new “Love Connection” hosted by Andy Cohen (“Watch What Happens Live”) is still as much fun and titillating as season one. Maybe even more so now that some on the harsh game play has been elilminated.

Remember in first season of “Love Connection” where if the singles had a different choice than the voting studio audience, then they got to choose between the audience vote to gain $10,000 or go with their own choice and no money? Well, that’s gone! The single still rates their dates before the low-down of the date is reveled based on their first-impressions, and vice-versa. 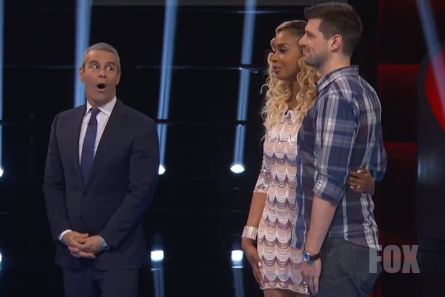 Singles no longer have to choose between money or an undesirable date as in season one (above).

The “over-night” dates, which is a part of the game brought from executive producer Mike Fleiss’ ‘Bachelor franchise, remain as part of “Love Connection” as well.

The set is the same as season one, with the heart draw bridge included. The studio audience still makes their selects at the top of the show after viewing the video packages of each of the single’s options of daters.

In a FOX teaser video for “Love Connection” season 2, the show will have an episode with ALL gay men, which is different from last season where one of the singles featured on an episode was gay or lesbian. Also this season, like last season, another Housewife will be a contestant on the show. Last season, it was Ramona Singer from”The Real Housewives of New York City” that was on “Love Connection” looking for a match. This season, Porsha Williams from “The Real Housewives of Atlanta” who will be a single contestant also looking for a love match. 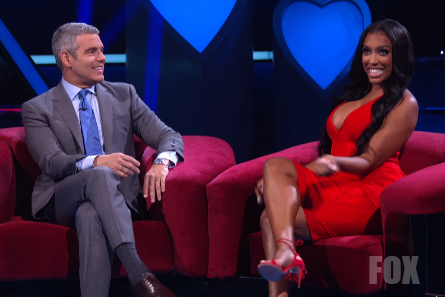 The half-hour show takes viewers through the dates of two singles. Some modernization has been added with the use of selfie videos, a high-tech draw bridge, and the over-night dates (as mentioned before). The unfortunate part of this is these updates do eat-up time. Compared to the original “Love Connection” from the 1990’s hosted by Chuck Woolery, Cohen doesn’t delve into a whole lot of details which older audiences from the ’90s generation will remember. No fault to the host Cohen, but more of a disadvantage to the time-constraints inflicted by finishing both dates within the half-hour time frame from start to finish, as well as other updated added factors. Woolery would expose much more information out of the singles which often would require the show to continue on to the next episode. That format is clear out the window. 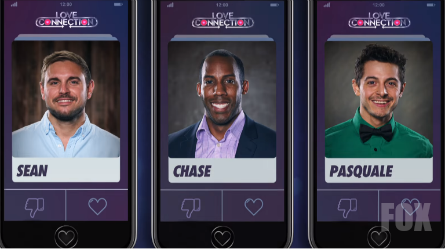 All gay episode to be featured in “Love Connection” season 2. FOX

During the show tapings, host Andy Cohen is very friendly and open to answering studio audience questions during down time. He told the audience that he has a bottle of Whiskey in his dressing room. Cohen also stated that one thing that viewers can expect to see in season two of “Love Connection” is an episode with daters 60+ years old! That should be fun!

Hollywood Junket got a glimpse at season two during a several tapings. One shos featured a female dater looking for love from the same sex. She said she hadn’t been kissed in over a year. The audience, and host included all gasped. To make things worse, her ex broke-up with her on her Birthday. The dater that she chose seemed to be a good fit for her.

The second dater looking for love was a female who cursed a lot. She gave a heart-throb contestant a score of one. He gave her an eight score. This contestant got a lot of flak for taking her sky diving which required a one hour drive! Another one of her daters took her to a sex museum for their date. Her third date took her to two roof top bars. But, she’s afraid of heights!

The third dater on “Love Connection” during this taping was twenty-six-years old and has never had a boyfriend. Her first date showed-up in sunglasses and said he’s used to models. Thus, he scored her at a four. The whole studio audience disliked him. The contestant that she ultimately chose at the end, gave her a ten score, and she also gave him a ten first impression score. Did the studio audience also choose him? Just one of many scenarios that make-up the fun for viewers at home on the new “Love Connection” which premieres Tuesday, May 29th on FOX at 9/8 c.