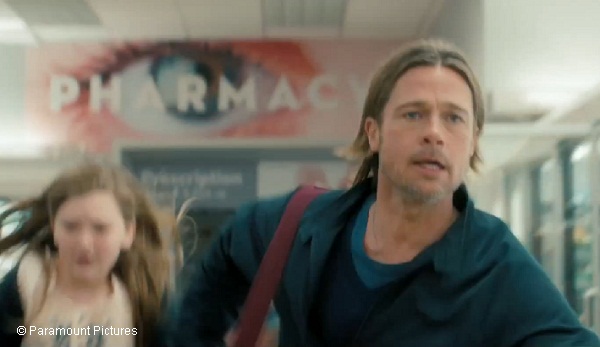 Paramount Pictures has released an official “Game Spot” ad for the Super Bowl XLVII of their upcoming action film WORLD WAR Z. This new ad is a shortened version of the one that was released late last year. WORLD WAR Z is a zombie thriller starring Brad Pitt, and Mireille Enos who play husband and wife trying their best to keep their children safe as the whole world seems to be crashing down upon them.

Pitt plays not only a father and husband, but also a U.N. employee who is summoned for his skills to help fight against the sudden “outbreak of a deadly Zombie pandemic” all the while racing to get back to his family alive.

Still images below are taken from the latest trailer of the film depicting the upheaval and the computer generated effects.