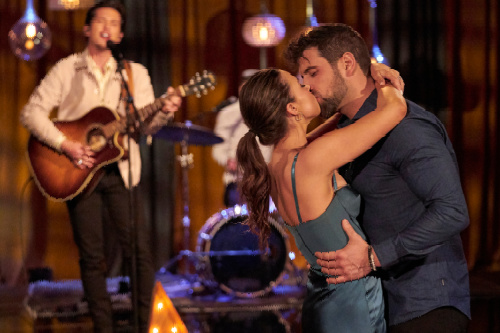 Just when we thought all the villains had been eradicated from the house, this week’s “The Bachelorette” season 17 week 5 shined light on yet another one.  That was Hunter.  The men were thrown a curve ball when Blake Moynes showed-up out of the blue.  The men suspected that Katie and Blake knew each other prior.  It didn’t help matters when Blake got the first one-on-one date.  Blake got caught-up on Katie’s revelation about how she became so sexually positive.

Katie got closer to Andrew S., Blake, and Michael.  This week also had the largest group date with 13 men.

FULL RUNDOWN OF WEEK 5 EPISODE BELOW:

The first group date arrived and it had Blake’s name on it.  The card read:  “Blake, let’s makeup for lost time. – Katie”Blake said he doesn’t have time to care if the men are upset and that he came for Katie.

Katie went to pick up Blake for their one-on-one date and opened-up the floor for questions from the other men regarding Blake.  Quartney asked if they knew each other before the show.  Katie answered that she doesn’t know Blake but did send her messages.  “I do value every relationship here” and was honest about having “good chemistry” with Blake.
Katie said by going on the date with Blake right away, she’ll be able to see sooner than later if there’s anything there between them.  If not, she’ll send him home right away.

Katie and Blake rode on horses to an outdoor picnic in the desert.  Then they made-out on top of hey.

Back to the men:  They were worried about Blake being a legit content and a threat to the rest of them.  The overall consensus was yes.

That meant that Andrew S. got the second one-on-one date.

Back to Katie & Blake: A warning was given before the next segment aired of Katie and Blake’s date that had sensitive subject matter.   Blake asked her how did she become so sex-positive.  He said in sex positivity, “there’s so much more to it.  How did that come to be?”

Katie said it’s a story that you won’t expect and she explained that it happened ten years ago where she was at a party drinking and someone she knew didn’t receive consent from her. “I was in denial about what happened.” She said so much that she aggressively pursued him to make it not real what happened.

Katie said when the “me too’ movement happened, it gave her some of the power back and in the past year owned who she was.  She started talking about sex again in a healthy way.  Blake told her that he was sorry and “no one needs to go through that.”

Katie said the conversation with Blake is “easy and no surface level topics” and decided that she made the right decision about Blake.  Katie gave Blake the date rose.  Blake said he hasn’t felt this way about anyone in a long time.  She gave him more than a rose, he said “she gave me trust and honesty.”

Then the two enjoyed music from former American Idol winner Laine Hardy, who performed his single “Memorize You.”  Katie thought it was the perfect song choice for her and Blake.

Katie’s group date was with 13 men.  Everyone except Blake and Andrew S. were included.  She told the men that sports are a big part of her life.  She announced that they had two “legends” coming today.  It ended up being Wells Adams, and Franco Lacosta. Lol. Viewers will recognize Wells from past ‘Bachelorette season 12, and Franco as ‘The Bachelorette photographer.  The men were stumped because they had no idea who these men were.

The game was titled, “Bachelorette Bash Ball Battle.”   The losing team would go home.  “The only shot at the rose is winning this game” Wells told the men.
The men came out in some skimpy outfits similar to what Borat would wear.  Katie ogled the men via binoculars while they played. 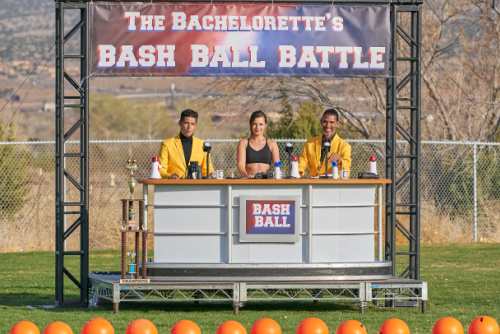 During the game, Hunter ran into Mike P.  Then tackled a lot of the men after that.   It got intense.  When Michael A. got hit hard from the back then landed on the ground, the game stopped and everyone rushed over to see how he was.   Katie ended the game and said they weren’t playing anymore.

Katie said the Black Team was the winner by points.  But they’re all winners and invited all the men to the After Party. 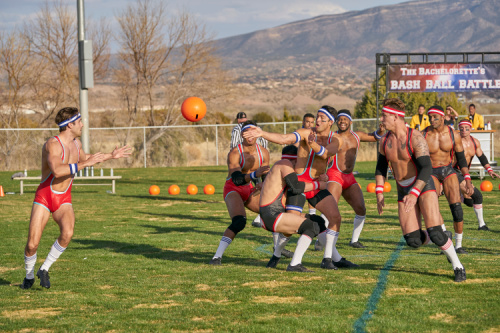 THE BACHELORETTE Photo by: ABC/Craig Sjodin

The After Party: Katie took private time with Michael first.  Katie told him that she got emotional seeing him get hit.  Katie spent time with Connor B. next who played guitar and sang while wearing an open shirt.  Katie got emotional over the song and teared-up.
When Hunter talked to Katie, he told her that he’s never introduced his kids to a woman.  But, he brought pictures to share with Katie.  She loved the photos of him with his kids.  He said he wanted to share that with her because he wants them to meet her.  Then Katie kissed Hunter.  In his confessional, he said he felt confident about getting the date rose.

Back to the men:  The one-on-one card arrived.  It read: “Andrew S., let’s find our way to love, Love Katie.”  Andrew said seeing his name on that date card is exciting and scary.  Because it’s going to be just him and her.  He said he was nervous.

Back to the group date: Michael A. told the men that he’s widowed and that when you find that special person, hold on to them. He told them that when you see someone you love, fighting for their life and it’s out of their control.  You find the positive things in life.  On top of that, he said “yesterday was my wife’s birthday.”  Michael and Greg were both crying.  Greg was still crying when he said Greg just put everything into perspective.  Michael urged the guys not to waste their time here on Earth.  Greg took it to heart and said he knows he’s meant to be with Katie.  He was ready to fight for her.

During Greg’s time with Katie, she told him that he has a “resting sad face” and asked how he was.  He told her that it was tough for him tonight and that he’s crazy about her.  He said the process “is so hard.”  Greg said he feels that he’s for her.  Katie said that her worst fear was that he’s ready to leave.  Then, they kissed.

Katie ended-up giving the date rose to Hunter.  Greg and Michael, as well as the rest of the men were extremely disappointed.  The men think Hunter is fake and hopes Katie sees it soon.

They had a night-time date.  The two carried lanterns while walking in the woods.  Andrew S. was nervous.  Katie took Andrew S. to a bunch of envelopes hanging by lights in trees.  Each envelope had questions that revealed different things about them. One thing Andrew said he learned was to not leave your partner, and pick up all the pieces.  Katie said she learned to “not settle” and marriage is meant to be forever.  And take your time finding your person.”  Katie said Andrew is that kind of guy to “go with it and it feels like we’ve been dating for a long time.”

Katie said she hoped that the date would be the start of falling for Andrew S.  During dinner, Andrew told Katie about how he put his energy into football after his Dad left him.  He said talking to her about cherishing things that her father’s done, he broke-down and doesn’t understand how a father wouldn’t want to be present for everything.  That’s why Andrew S. said when he becomes a father, he’s going to be there for everything.  He said that he’s so “all in” for her.

Then he said as for inter-racial couples, there’s things that people look at differently and his ex was worried about having mixed children.  He said she was worried about their kids not looking like her and reactions from other people.  Andrew said hearing that was tough and it was the woman that he thought he was going to propose to.

Katie said hearing that, that happened to him, breaks her heart and she doesn’t care what other people think.  Katie said “all I want is love…all I want is a beautiful family regardless of how they look.”  She told Andrew that he’s an amazing man and believes he will be the best husband and father.

The next part of the date was a soak in a hot tub.  That’s when Katie gave Andrew the date rose.  Katie said she knows he’ll be an amazing father and he’s everything she’s looking for.

At the beginning of the cocktail party, Katie told the men that she does see her husband in the room.  Hunter was still patting himself on the back for being “aggressive” which got him the rose.  He said as far as he sees it, it’s him and Katie at the end.  Then Hunter went in for some time with Katie.  The other guys were hating that since Hunter already had a rose.  James, whom we haven’t seen much of, was sitting with Aaron complaining about Hunter.  Then James got up and went over to Hunter and Katie.

When James interrupted,  Hunter told him “no” and that he’ll need at least two more minutes.  James waited off to the side for a couple of minutes then cut in again.  In his confessional video, Hunter was upset and said he was going to get that lost time back.  James told Katie that he does have feelings for her that are growing every day.  He said it would be a big regret not telling her that.  Then they kissed.

When Hunter returned to James, Tre, and Aaron, they reamed him out.  Hunter reacted that he’s competing for the same “love” that they are.  The other guys also said that they “are desperate for time.”  Tre said two ceremonies in a row have happened where he didn’t get time with Katie.

Katie told the men that she is taking this seriously and it’s important for her to follow her gut.  She thanked all the men for showing-up for her, “it means everything to me.”

After the ceremony, Aaron was trying to make a group toast, when Hunter interrupted to make the toast. 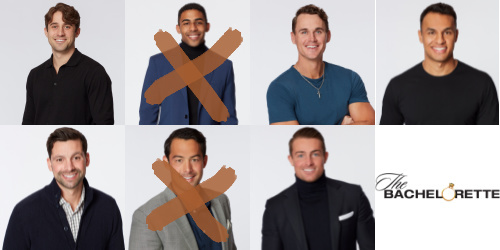 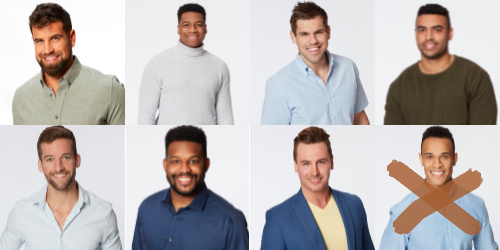