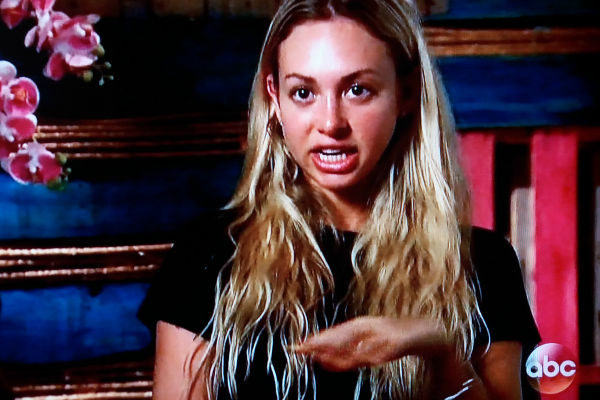 Last week, three women went home, and “The Bachelor” Nick Viall left the women stunned and worried after he announced his skepticism about finding his soul mate in the group of women that were left. Ouch!

This week, the women were still reflecting on the couch over Nick’s revelation and contemplating the meaning of it. They were feeling fearful of him ending his time on the show. 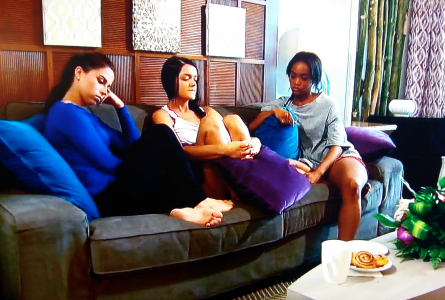 “The Bachelor” host Chris Harrison went to Nick to console him. Nick told Harrison that he’s afraid of what happened with Danielle L. last week will happen with the rest of the women. “I’ve been wrong before, I could be wrong again. Harrison sympathized “you’re scared.” When Harrison asked if Nick would like to walk away from the show, he gave him the impression that it could be a possibility.

Nick re-visited the women in their suit. After a long-winded speech, he finally came to the conclusion that he hadn’t given up hope yet of finding his special someone. The women were relieved and even more so when Nick added that there would be no Cocktail Party and NO Rose Ceremony. Instead, they’d be leaving Saint Thomas, and going the to the Island of Bimini!

Nick decided to forego the Rose Ceremony, and take the women to the Island of Bimini in the Bahamas instead!

When the date card arrived, it read: Vanessa “Let’s go deeper.” It’s Vanessa’s second one-on-one date. Corrine got upset because she hasn’t had a one-on-one date yet, and is threatened that “deeper” means Nick getting a more emotional connection with Vanessa.

The two spend some time on a yacht, then went scuba diving near an abandoned ship. Before dinner, Vanessa contemplated on telling Nick that she’s falling in love with him and was confident that he felt that same.

Back at the house: The women got the Group Date card with the names -Corrine, Kristina, Rave. The card read “Lets jump in with both feet first.” That meant that Rachel and Danielle M. would be going on one-on-one dates. 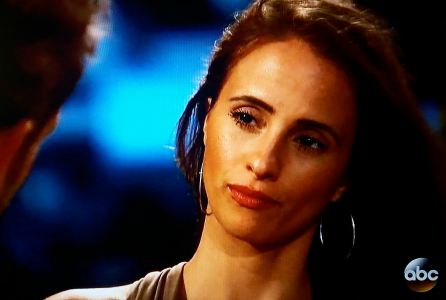 Back to Nick & Vanessa: Nick responded that he’s looking for a greater love and wants to say the words “I love you” only once. By the end of his explanation, Vanessa was left feeling confused and hurt. Vanessa said in her confessional that she’s afraid of ending-up like Nick did in previous seasons on the show “heart-broken”.

There was only one rose to be given out this week during a date, and Raven got it during the Group Date! That meant Raven would also get the hometown date with Nick which happens in next week’s episode. Kristina and Corrine were supper bummed. Especially since Kristina used her damsel in distress act when she freaked-out over shark during scuba diving. Corrine was beyond frustrating and nothing seemed to be working for her no matter how sexy she tried to be around Nick.

During her date, Raven confessed that she’s falling in love with Nick. But, didn’t tell Nick that yet. Probably a good reason why she’s still on the show.

Rachel’s One-on-One Date card read: “Let’s get a taste of the local flavor.” Rachel was excited to have the last one-on-one date before the hometowns and getting to have a “lasting impression” on Nick.

Danielle’s personality is naturally quite, but during their date, it was noticeable that Nick and her were struggling to have a conversation. From that point on, the doubt began to set in with Nick.

During dinner, Danielle told Nick that she felt that she can do anything with him and is very “open”. Nick wanted to have strong feelings for Danielle, but those feelings just weren’t’ there and he sent her home. 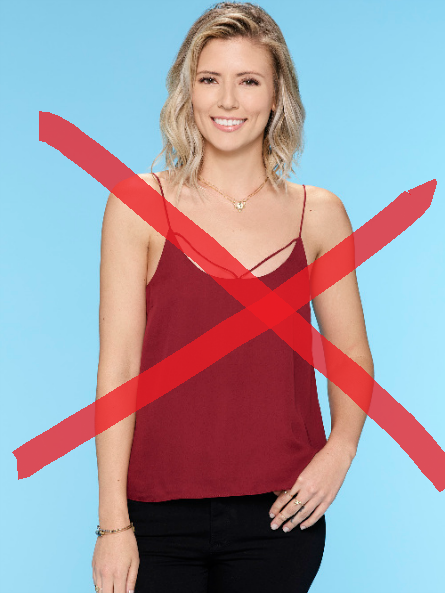 After all the women were shocked that Danielle got sent home, Corrine decided to create some insurance of getting a hometown date for herself by sneaking over to Nick’s room. She said she was going to “blow that room up.”

When Corrine suggested they spend some time together in his bed and things began to get hot and heavy Nick halted the action. Out of respect for the rest of the women, Nick declined Corrine’s advances. He said. “I’m glad that we didn’t go to a place that we would eventually regret.” Corrine was un-nerved because she was at a loss of what else to do beyond that. Even her “platinum vagine” and golden heart couldn’t turn things around for her.

Corrine admitted that she officially was spinning out of control and was seriously worried about not getting a rose. Then walked in a beaming Rachel who was ready for her one-on-one date with Nick 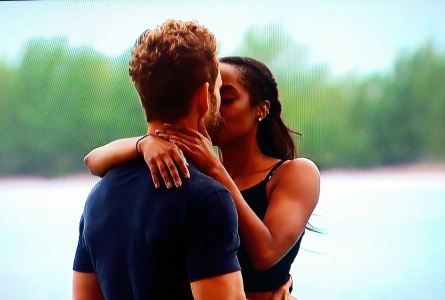 Nick took Rachel to a local bar to start the date to discuss a possible hometown date. Rachel revealed to Nick that she’s never brought home a white guy, but wasn’t worried about her family reacting badly to it. A local man at the bar commented to Rachel and Nick to make sure Nick “needs” her and not just “want” her! After they scribbled their names on a beam and made out a little bit, their date was over. 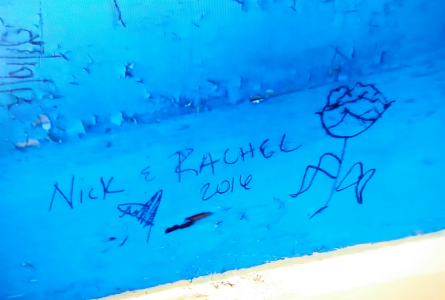 During a conversation with Harrison, Nick decided to pull the one woman away whom he knew he didn’t have strong feelings for before the Rose Ceremony. Harrison called it “a necessary evil. It has to happen.” That woman was Kristina. 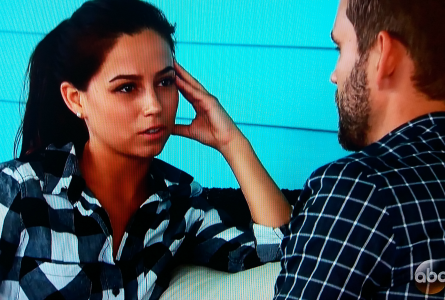 Nick told Kristina that she deserved to have a man in front of her who isn’t telling her that he has stronger feelings for the other women. During Kristina’s tearful ride home, she stated that she was the most vulnerable with Nick and was greatly disappointed. 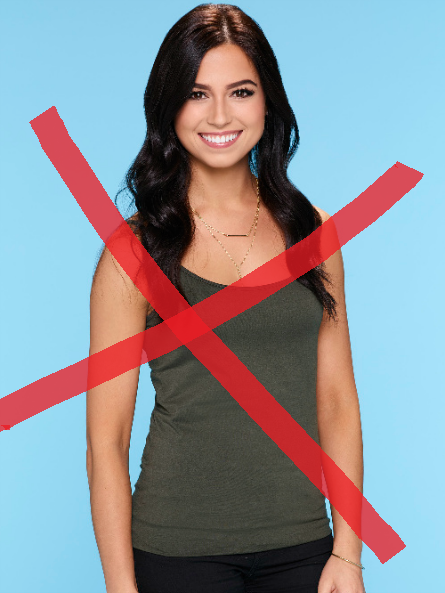 Pictured above: Kristina was sent home.

SPOILER: Earlier in the day before the airing of this episode, “The Bachelor” show announced Rachel Lindsay as the next “Bachelorette”. So, we now know that Rachel will not be chosen by Nick as his final girl and will be going home. We’re curious how it will all unfold. Will she be the runner-up? Or, will she suffer a horrible blow like previous ‘Bachelorette Joelle did last season when Ben Higgins told her that he loved her, AND Lauren too! That was heart-breaking. 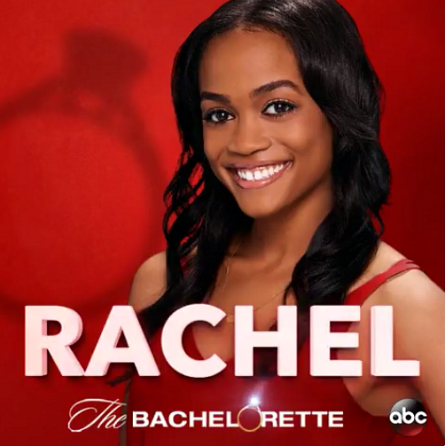