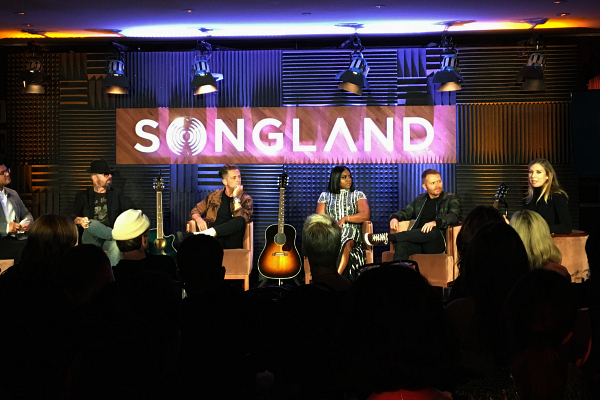 A show inspired by some of the backstage workings at NBC’s successful music television show “The Voice,” comes “Songland” from the same producers. During an intimate chat moderated by Rolling Stone’s Brendan Klinkenberg, attendees got to hear about the behind-the-scenes making of “Songland.”

The panel of guests included “Songland” Executive Producers Dave Stewart (co-founder of The Eurythmics), and Audrey Morrissey (show-runner from “The Voice”), along with mentors who are on the show’s panel, Ryan Tedder who is the lead singer of OneRepublic and a Grammy winning songwriting artist, Ester Dean who is a Grammy nominated songwriter, producer and actress from “Pitch Perfect” and has worked with Rihanna, Beyonce, and Katy Perry. The last panel guest was Shane McAnally who has worked with Kacey Musgraves, Sam Hunt, Kelly Clarkson, and won songwriter of the year at this year’s ACM awards.

In a “Songland” teaser, it’s explained that the songs on this show are “songs no one has heard.” Celebrity guests such as Macklemore tweak the songwriters’ songs.  At the end, these celebrity singers pick the best song.   Another famous singer on the show, Will.i.am is shown offering one of the songwriters to have a song on the Black Eyed Peas album. That’s big! However, the teaser was vague enough to leave a bit of mystery about the show. That’s where the guests on the panel stepped-in to explain more about “Songland” to premiere May 28, 2019 on NBC.

Each panel guest explained real-life scenarios that turned into uber successful opportunities. Ryan Tedder told of the story of meeting Adele in an elevator one day. She told him she had been trying to get a hold of him for months. Tedder ultimately ended-up writing “Turning Tables” for Adele, which was a song about her ex. Then also wrote “Rumor Has It” on her 21 album. Ryan stated that it’s gotten harder to “cold pitch songs.”

As for the concept for “Songland,” Audrey said at the start of her career at MTV she got to work with the biggest artists on the planet.  Later, she found herself backstage talking to coaches on “The Voice” about song choices.  They would talk about why certain songs wouldn’t work for certain artists.  “I realized that it was all about the material,” said Audrey. She was introduced to Dave Stewart who said he wanted to do a show about songwriting.  “Once upon a time songwriters were household names.  But, now they’re not,” stated Dave.  It was pitched as a songwriter show like “The Voice.”  Dave said him and Audrey hit it off immediately. He said “between us we have this perfect match.”  They tested the show because Dave was concerned what if no one can write music.  They received thousands of submissions which were ultimately cut-down to 80.

Dave had talked to Ester Dean first and told her she was going to be on a panel for a show that doesn’t exisit yet.  He said they were very fortunate that the first panel they went for “knocked it out of the park.”  Ester said she’s glad that she’s at this point to mentor.

Ryan was asked how they convinced artists not to use their own teams of songwriters.  He answered, there was a moment when Adam Levine was considering not coming back to ‘The Voice.’  They contacted Ryan to see if he wanted Adam’s chair and he had two days to decide.  After Adam decided not to leave, Audrey told Ryan about this “other show” he’s better suited for.  “At it’s core, it’s credible,”  stated Ryan and that’s what scared him off about doing TV before.  Ryan is now in the process of signing two writers off of “Songland.” Having the number one writer of all time (Shan McAnally), plus Ester, then me (Ryan) he said they capture the magic that happens in a room of songwriting.

Shane has 31 number ones.  What he wants people to take away from the show is this – “they (family) really don’t understand what we do.” Even his parents seeing the pilot, they reacted that they thought he sold songs all day. After the show, they reacted that “it is like magic,” and he stated “the passion around songwriting is what we really want people to take away from it,” along with how much goes into this.

Ryan said, a lady who’s worked in television for thirty years on big shows such as “The Voice,” and “America’s Got Talent” reacted to “Songland” that the only thing she could compare the show to was “watching people do actual magic.” Ryan also stated that producers on “Songland” wanted to jump ship (off of other shows) to join their show. During the Q&A session, these songwriters re-created some of this magic by telling stories of how some of their most famous songs were written.

Ester and Shane are within a 100 mile radius from each other, but never met.  The process of finding the people that would end up on the show, Audrey said when they did the pilot episode one year ago, they did a big casting for that.  When they were green lit, they casted more.

When asked how they convinced artists to come onto “Songland,” Audrey said she was concerned that it was not “bookable.”  However, the key was that the artists needed to feel safe that the songs had been vetted.  They got the selections down to 20 songs, sent them to each artists’ camp and asked them to please not send them to the artists, which they didn’t.

Charlie Puth  was the pilot episode artist.  Ryan discovered after the pilot they always got the songs to that one person that the artists trust.  You can call up your trusted person if you’re the artist. If you have everyone buy-in and it works, that’s what they discovered after the first epiosde.  Audrey stated for the format of the show, “you have to make writing songs compelling.” We were very fortunate that Charlie is an artist, and song producer.  Puth said this (“Songland”) is about paying it forward and giving someone a real shot.  Audrey was so touched by the generosity of the artists.  Dave said the Charlie Puth episode was “like voodoo.”  Audrey added that “it was an unbelievably successful show.”

Dave said after a while, the panalists forget that they’re being filmed.  Ryan said “It’s a safe place for the artists.”  Shane commented, “there are no accidents with superstars…every single one of them just blew me away.”  Half the artists that left the show asked if there were any seats available on the panel.

Shane said in Nashville, at the Bluebird Cafe, they tell the story of how songs are written then play them.  He went on to talk about one of his songs. “This song started about my sister. Don’t be impressed, this song doesn’t portray her in the best light.”  His sister had gone through a rough break-up and was angry. Shane’s mom said stop telling people that the song is about her.  Miranda recorded the song and when his mom met Miranda Lambert backstage, who told her that she loves “Mama’s Broken Heart.”  His mom said ‘you know that song’s about me.’

Ester wanted to tell a story that was different from success.  I was getting ready to leave (before meeting Rihanna to pitch a song).  She was 5 feet away from the door.  The Rude Boy song was her most successful song. Ester said that day she was feeling insecure about being there, and meeting Rihanna.

Dave said when he first started writing songs, you had to sing it to someone.  He got signed by Chris Blackwell when he was 18 years old.  He got married at 18 to a 17-year-old, which they eventually divorced.  When he lived with the other half of The Eurythmics, Annie Lennox , he said, they never wrote a song.  When they lived apart, they wrote 100 songs about breaking-up.  Dave said he never spent more than 15 minutes writing a song.  They wrote nine albums in ten years.

Dave wrote “Don’t Come Around Here No More” with Tom Petty. He said “there’s a strange story about that. I’ll get emotional.” One place where Ryan writes songs, he shared, is on airplanes. No one can really get at him, except wi-fi screwed that up, he joked. There’s much more craft in Nashville than any city he’s been to.