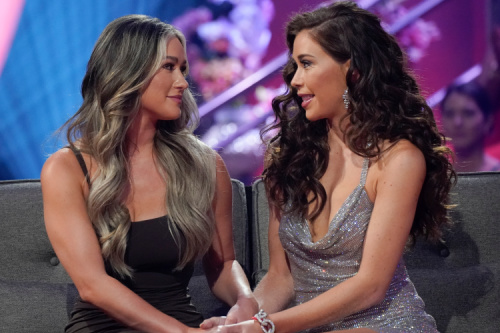 Did more men self-eliminate during this ‘Bachelorette season than any other season?

This season of “The Bachelorette” was full of duds for the Bachelorettes Gabby Windy and Rachel Recchia.  The first major question is why didn’t producers add more men for these women part-way through the season like they did for Matt James? The second question is why did Gabby and Rachel only get 32 men to choose from going in, knowing that these men would be split between them?

Just when it seemed like Gabby or Rachel was going to find their person for them amongst this group of men, it proved to be quite the opposite. There was hope that it would be Jason or Nate for Gabby, and Zach or Tino for Rachel.  But, things began to unravel for both women in the overnight dates.  In the case of Nate, it was before Hometown dates where Gabby let him go. As we all saw afterwards, Nate’s morals came up for question in Bachelor Nation after getting exposed for dating multiple women at the same time and he was basically labeled as an F-Boy.

It became clear that Jason wasn’t as into Gabby as she was into him, or at least as she wanted him to be into her.  He put himself in the awkward position of stretching out his relationship with Gabby because he couldn’t figure out how to break things off.  He used the excuse of getting “clarity” during the Fantasy Suite date. Then, Zach seemed to be genuinely into Rachel except she was more into Tino.  Again, this time it was Rachel who kept her relationship going with Zach longer than what it should have been.  Then Zach confronted Rachel at the Rose Ceremony the night after their Fantasy Suite date where Zach accused her of having a multiple personality.

Tino seemed to be the front-runner for Rachel since the beginning.  Things went South when his parents didn’t approve of Tino finding love on a reality show with Rachel.  In the previews of the finale episode, it seems there will be more trouble coming up between Rachel and Tino.  It’s the same for Gabby and Erich who are both not on the same page.  Gabby wants an engagement, and Erich wants to date before an engagement.  Hmm….not a new concept.  It is very traditional for couples from “The Bachelor ” franchises to pop the question with the expectation that they’ll date after the show before getting married, IF they get married.  So, this whole anti-dating concept after the show has been blown way out of proportion most likely for drama sake.

Then again, this is also a major red flag as Gabby sees it.  More information about Erich has unfolded in the Bachelor Nation community that an ex-girlfriend, Amanda Kaylor,  of Erich’s has stated that they were in a serious relationship before he went onto “The Bachelorette” and she broke-up with him because he went onto the show.  Then apparently, according to Amanda, Erich reached-out to her after filming wrapped.  So, Erich not wanting to get engaged to Gabby and date instead simply gives him the excuse to find something wrong in the relationship to break up after the show then go back to his ex-girlfriend or find a new girl.

Also with Erich, the first red flag was evident from the beginning when he didn’t seem to be on “The Bachelorette” for the right reason.  But, the same can be said for many of these men.  All-in-all this season is turning-out to be not one big mess, but two big messes since we had double the Bachelorettes.’ 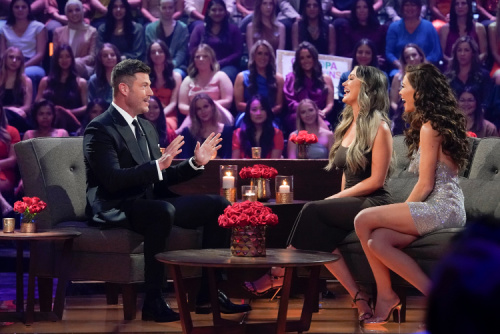 “The Bachelorette” finale episode part 1 was aired in front of a live in-studio audience with host Jesse Palmer moderating and conducting post interviews with Gabby and Rachel as well as bringing back Aven and Zach to discuss what went down in the episode.  None of Gabby’s former suitor came back to get closure with her.  There was no Jason, and no Johnny returning.  Honestly, Jason had told Gabby that he was uncomfortable with the whole reality show thing. So, him not coming back was no surprise. 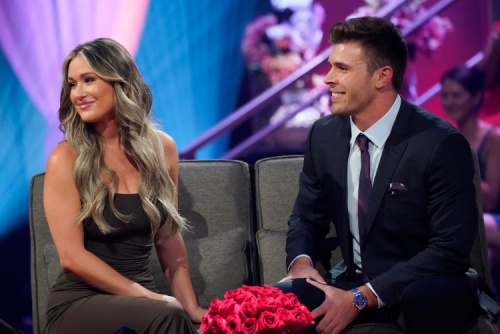 At the top of the episode it picked-up where last week’s show left off.  Zach pulled Rachel away from the Rose Ceremony to talk privately away from Tino and Aven.  During the Fantasy Suite date, Zach discovered that Rachel wasn’t in love with him like he is with her.  It threw him for a loop because she couldn’t express the same love for him that he felt for her. Up until that point, he got the impression from Rachel that his feelings were mutual.  But, her personality seemed to change once the cameras were off.  Rachel told him she was trying to get clarity and wished that she “could get there” with him. Zach said goodbye to Rachel.

Rachel came back to the Ceremony and told Tino and Aven that Zach questioned her character, then handed out roses to both men.  Gabby didn’t have a Rose Ceremony because the only man left was Erich.  But, when she went to Erich’s hotel room to break the news, she made it seem like she sent the other two men (Johnny and Jason) home.  But, in reality, both men broke-up with her because they just weren’t there yet with her.  They most definitely were not ready to propose marriage to her.  As we saw later in this episode, Aven was also not there yet with Rachel.

Rachel brought Aven home to meet her mom, dad (a.k.a “Big Tony) and two best friends.  Big Tony and mom Mary Anne liked Aven enough.  However, when the two friends talked to Aven, he revealed that he wasn’t ready for an engagement. This was devastating news for Rachel.  When she confronted Aven, he fessed-up that he indeed was not ready for an engagement.  Rachel said she felt “blind-sided.”  In Aven’s defense, he said he was trying to protect himself because Tino is still there.  Ultimately, Rachel and Aven ended-up breaking up later on in this episode. 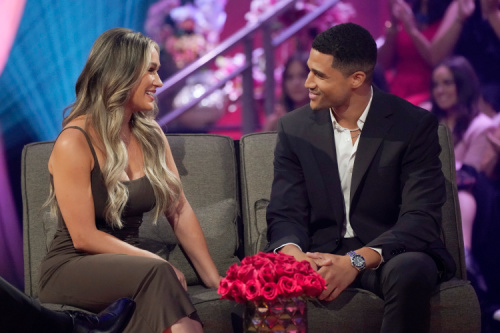 Gabby brought Erich home to meet her dad, step mom, Aunt, and grandpa John (whom Erich met on their first date previously).  Erich claimed to have had a “crazy connection” with Gabby from the start.  Gabby told her Dad Patrick that Erich loves her in a way that she hasn’t had before.  “I really do think we can last a long time which is why I get so emotional.”  She said when something is that good “you’re afraid to lose it.”  She said she loves Erich more than she thought she could love someone.  After Gabby expressed that she thought she might be “unlovable,” her Aunt told her to let Erich be the one to decide how to love her.  She said, “Let him see you for all that you are.”

Rachel brought Tino to also meet her parents and two best friends.  When Rachel’s mom Mary Anne asked about Tino’s parents (who weren’t jazzed about this process for finding love) Tino said he’s a million percent confident that they’ll love Rachel because he loves her.  Big Tony also asked about Tino’s hometown date.  His reply was that if they spend a day with Rachel at the beach, they’ll love her and said he wants to make Rachel happy forever.

This episode ended where Gabby and Erich were to have their last date before the expected proposal/Final Rose Ceremony.  This is when Erich got cold feet and told Gabby that he wanted to date first.  This sent Gabby into a tailspin as she quickly walked away from Erich extremely upset.  She said she didn’t want to walk away from this with a boyfriend.  Gabby told producers that she “doesn’t want to do this anymore.”

NEXT WEEK: Tuesday, September 20th is the season finale, also to be aired in front of a live studio audience.  The new BACHELOR will be announced.  Host Jesse Palmer said that there will be a “history making audience interaction” event as well during next Tuesday’s Finale