Not A Lot Of Love For LUCY – Movie Review

According To Reality – AMERICA’S GOT TALENT Judgement Week Day 2 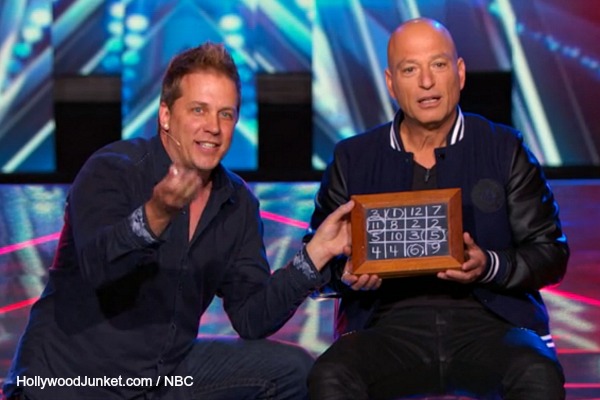 The judges of “America’s Got Talent” have seen all of the acts that have auditioned this season. Only forty-eight acts will make it to the live shows at Radio City Music Hall. However, before that, they must audition once again during this round called “Judgement Week” where judges Howie Mandel, Howard Stern, Heidi Klum, and Mel B will make their final selections. At the top of the show, the judges put through their favorite acts straight through to the live shows without them having to participate in Judgement Week. The rest of the acts have to audition once more to convince the judges that they should be part of the Top 48 going to Radio City Music Hall in New York City.

Each judge visited their favorite act in-person to deliver the great news. Howie Mandel visited “Blue Journey” in person to tell them that they wouldn’t be performing during Judgement Week. He told them, “You go through to the live shows to perform at Radio City Music Hall.” He then visited the two brothers and sister card throwing act “Dom The Bom’s Triple Threat“. Howie made the kids wait before telling them they were going through to the live shows by first going to the bathroom, then eating, then bouncing on their trampoline.

Howard Stern called aerial-balancing act Jonatan Riquelme on his radio show to give him the good news. “When I saw you perform, I loved you” and told him he’s going through. It was all too easy for Jonatan to contain his excitement.

Mel B. went to a dance studio where “Hart Dance Team”, was practicing to tell them about skipping Judgement Week. She also told the good news to Act II – an act made-up of two Opera singers. Cello playing act Emil and Dariel are also going straight through.

Heidi Klum saw magicians David and Leeman at the Magic Castle to deliver them their news. Host Nick Cannon even got to surprise an act. He went to “Stand-Up NY” comedy club to tell Dan Naturman. Dan said after 20 years of doing stand-up sometimes he feels down. But after learning he’ll be going straight through to Radio City Music Hall, he now feel re-energized and excited.

“For half of the people that we’re seeing this week, will go home,” said Howie. Heidi said, “There’s no room for error. These acts really have to step-it up.” The acts during Judgement Week need to be more unique, more original, and more exciting in order to claim their spots during the live shows.

First up was Mike Supper who’s a “mystifier” and his “supernatural” friend named “Desmond.” Just before getting onto the stage, Desmond didn’t show-up. Mike put Howie in the hot seat on stage and involved him and Nick Cannon in his act. Howie was asked to hold two chalk board panels together and think of a name whom he has and “emotional” attachment to. Nick was asked to give him a random, two digit number. Nick said “23”. When the two chalk panels were held up at the end of his auditions, one had a Zodiac chart on it with the judges birth month adding-up to the number 23, and the other board read “Steve”, the name of the person Howie was thinking of. The judges couldn’t explain how Mike did it.

Illusionist “Psycho Jack” performed a typical slicing a woman into pieces circus side-show act. He fumbled with while putting in some of the panels dividing that divided the woman in half. Backstage, Psycho Jack said that he couldn’t see the marks. Maybe if he didn’t perform with a rubber mask on his head, he’d be able to see! The judges called him back out onto the stage to tell him that his time there was over.

Franklin Saint who bent a fork in front of the judges during his first audition, said “I’m going to show my competition how much better I am” than them. He squashed a water bottle, un-crinkled a soda can and closed it with his energy. After he was done, Howard made a good point when he said Franklin’s act wasn’t incredible because he couldn’t see it.

Mat Franco says magic is a complete obsession for him . He went to magic school. He wowed the judges with a card trick that ended with photos of the judges on the cards that they picked. This time, Mat presented a deck of cards that created a large photo of Howie on the backs of them. At the very end, it was revealed that in the photos, Howie was holding the exact card that he had just selected from the deck! The judges were amazed but weren’t sure if his act would be big enough for the grand stage of Radio City Music Hall.

Sean and Luke are tap dancers who are best friends from Chicago. They bring a modern, hip-hop twist to tap dancing. After their second audition, Howard was not impressed by them. Heidi and Mel B loved them.

Solto Esengulov stated “I will bring Bruce Lee moves and robotic style.” He delivered a very odd audition which involved gyrations and contortion. Heidi thought it was “very entertaining.”

Dragon House: The Agents is a dance team that is a fusion of animation and popping. Since they lived together, they were always practicing their moves. Howard thought they were “terrific” but concerned if they were going to be doing the same thing every time.

John and Andrew are a same-sex Salsa dancing couple who are not a romantic couple. They are twenty years apart in age. Howie questioned if they were a man and woman if they would make it this far. Mel B and Heidi thought so. The judges called them back out to tell them that they made it through to the live shows.

Quintavious Johnson is the only boy in the Kid Singers category. Only twelve years old, he said he has to stand-out. He sang “Who’s Been Loving You” by Michael Jackson for his second audition. He was great! Heidi said it’s going to be hard in deciding among all the kid singers.

Grace Ann Gregorio is an eleven year old girl with such an angelic voice. She sang beautifully during her second audition after two hours of warm-up with her mother. Mel B thought Quintavious was the better singer. Howard favored Grace.

Mara Justine is a twelve year old with a big personality who says she’s always singing. During her first audition, she blew everyone away by singing Dreamgirls “And I Am Telling You” song. Her second audition had the judges equally blown away. “She’s the real deal guys. She’s a real singer” Howard said about Mara. All the judges were in agreement to keep Mara in the competition and decided that they wanted to let her know right away by calling her back out to put her straight through to the live shows.

Julia Goodwin is a fifteen year old who sang “It’s a New Dawn” song perfectly for her second audition. The judges were strained because all of the kid singers were exceptional and they didn’t know who they were going to send home.

Darik Santos is a security guard whose humor is very similar to last season’s comedian Taylor Williamson. After he had the judges cracking-up at his second audition, they asked how he thinks it went. Darik said “I think I won this thing!”

Wendy Liebaman said her second chance is auditioning for “America’s Got Talent,” after taking time out from comedy to raise her kids. The toughest comedy critic, Heidi Klum, didn’t love it. The other judges thought Wendy was good.

Joe Matarese said he tours all over to do stand-up comedy but he still doesn’t make enough money to support his family. Joe continued to make jokes that most people can relate to by telling jokes about raising his children. Unfortunately, the judges didn’t laugh at his jokes and it made Joe bomb even more.

Juan Carlos is a roller-blading dancer with a lot of charm. He said peoples’ favorite moves of his is when he spins and when he “shakes it!” His first audition had the audience going crazy, except for Howard who gave him the X. Juan said he will have the opportunity to entertain the whole world by being on AGT. After his mediocre second audition, Howard said this is a classic example of the other judges being wrong.

John Narum is the “yo-yo artist”. Howard said “we have to evaluate variety acts differently” because it’s harder for them to change things up in their acts.

Real cowboy Loop Rawlins came out and performed with guns, and a fire blazing lasso. It was very impressive, but the judges weren’t sure if the rest of America would like it as much.

The Mighty Atom Junior – He’s a 93 year old strong-man from a family of strong men. He pulled a heavy car with his teeth during his first audition. For his second audition, he pulled an old pick-up truck with all four judges and Nick Cannon in the back. He was successful at pulling the truck over the line. But, the judges were all worried if he was going to be okay.

JD Anderson – at 26 years old, he’s not threatened by Mighty Atom Junior. He broke baseball bats during his first auditions. His second audition had him ripping up phone books, crushing metal cooking pans, then running into a 15 foot wall of solid ice which he was successful at breaking all of the ice blocks in half.

Emily West is a 32 year old singer who had a deal with a country label that didn’t work out. She’s on AGT to “restart everything”. She sang Roy Orbison’s “You Got It” for her second audition. Afterwards, Howard said to the other judges “I’m looking for something different. She’s the real deal”.

Carly Jo Jackson is a 20 year old singer and guitarist. She’s been plugging away at playing a lot at coffee shops which she doesn’t want to do anymore. The judges thought that she was a “natural” and real good singer.

Anna Clendening has been fighting anxiety and depression. She impressed everyone with “Hallelujah” song in her first audition. Before her second audition, she experienced a panic attack. She felt the pressure of doing well and not letting people down. When she made it to the stage, she sang Imagine Dragons “Radio Active” song. Howie thought she was great and can relate to her because of his anxiety disorder. He wasn’t sure if she would be able to handle the pressures of Radio City Music Hall.

Kelli Glover is a returning AGT contestant who was previously eliminated in the Vegas round during the show’s 2009 season. Known as the girl who can “belt it out”, Kelli sang “Warrior” by Demi Lovato to perfection and like a real pro during her second audition. The judges were speechless because she sang that good.