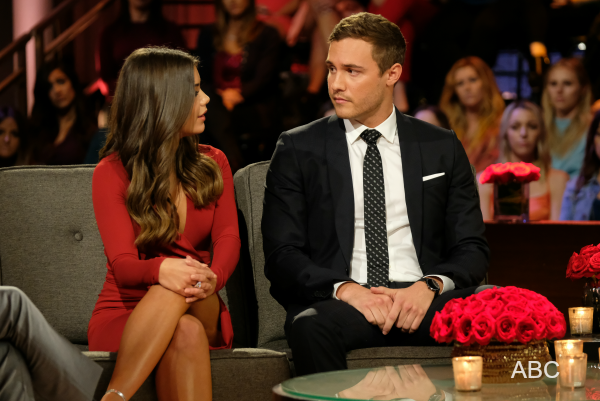 ABC’s part two of “The Bachelor” season 24 finale rejoined host Chris Harrison in the studio with an audience who anxiously awaited part 2 of the finale chapter to come to a “dramatic end.” Many times promised by Harrison himself. It would be an ending whom no one knew about, not even Harrison, nor Peter himself. This would lead us to believe that Peter will get his answer during the live studio portion of the finale from the woman he ultimately will chose. ‘Bachelor Peter Weber’s love story picked back up in Alice Springs, Australia

Peter said when you find true love, it always rises.  He said he knows he has “true love” with Hannah Ann, and gives him so much confidence in the love that he always wanted.  “it feels right and real with Hannah Ann.”  Then, Peter welcomes Neil Lane at his hotel love.  He said he’s choosing Hannah Ann because he’s 100% certain.

Peter made the phone call to Hannah Ann’s father to ask for his blessing for her hand in marriage, which he did.  Peter was ecstatic!   Hannah Ann said she has no doubt with Peter and has been searching for this kind of love for so long.  However, last night, when Peter told her that his heart is being torn between her and Madison, it’s hard to wrap her mind around that.  She said she’s at her absolute breaking point and wants someone to be sure of her.  “It doesn’t seem like he’s there.”  She said she wants to put up her guard and “tap out.”

As Peter awaited at the Final Rose ceremony, host Chris Harrison arrived to deliver some news.  “There’s something I just found out about Hannah Ann” and told him he’s not positive that she’s coming.   “I’m sorry” said Harrison.

After some down time, Harrison told Peter that Hannah Ann was indeed coming to the ceremony.   Once she arrived that entailed a long walk through the outback terrain, over to Peter who was standing there waiting for her, Peter gave her a spill about falling for her, and his heart being torn in two different directions.  Peter was truthful in telling Hannah Ann that Madison left two days ago.   He told her his heart chooses her “forever…I love you Hannah Ann,” and the love that she’s shown him is all he’s ever wanted.  Peter then got down on one knee and asked to marry her.  Hannah Ann was truly happy with her “yes” response.

He told his parents and brother in-person that he proposed marriage to Hannah Ann. Barbara was so emotional, she couldn’t contain herself.  “We love her so much!  We love her!” Barbara exclaimed.   Peter did a Face Time phone call with Hannah Ann and the Weber’s.  They told her that they love her.

Chris Harrison brought Peter out onto the stage for an update.   Peter said he struggles the most with the feelings that he had for Madison.

ONE MONTH LATER IN LOS ANGELES:

Hannah visits Peter who told her at the time, he had no doubt that he had fallen in love with her.  However, he’s been struggling.  “This kills me,” Peter said to see her “give everything” and for him to be where he’s at.  “I hate that,” he told her.   She told him that she said “yes” to them being partners and a team.  But, if he can’t give her that love in return, then it’s not a relationship.  “You have to be fifty-fifty” she told him.  Peter assured her that he never intended on giving his heart to two people.  Peter told her that he wants so badly to give her everything and his entire heart.  But, can’t.   Hannah Ann responded, “I don’t know what to say.”  She said all she asked was for someone to give her, her whole heart and he took away her first engagement.  Then she walked-out.

Peter told her he was sorry. Hannah Ann asked if he was sorry for not being true to his feelings and his words?  He answered yes.   Hannah Ann was upset by him taking away her “most precious” moment from her and “I can’t look at you anymore.”  Hannah Ann continued, “I need someone who’s going to be true to his words.  Not torn and conflicted ninety percent of the time.  I don’t need anything more from you.  You’ve done enough damage.”

Back in the studio:  Harrison asked about that day with Hannah Ann.  Peter answered that he wasn’t expecting that.  And that day, tore his heart out.  He was sad that he had taken away her engagement.  Harrison asked if that decision was because of Madison.  He said a little bit.  But, it was more because he couldn’t match what she was giving him.

After the commercial break:  Hannah Ann came out to the stage to talk to Peter.  Hannah Ann said she knew things were off between them but didn’t expect that he was going to go against his words.  She told him that he knew how serious it was for her to have an engagement.  She said he knew what to say to keep her with him.  Peter said he’s never had the love that she showed him.  He said he felt that 100% love from her.   Hannah Ann told him that he downplayed how he felt for Madison and didn’t tell her the extent of what happened with Madison.  She thought that she said “yes” to someone that could give her his whole heart.  Peter responded that he thought his heart would heal in time, and would eventually get there with Hannah Ann.

Harrison gave Hannah Ann the final word.  She told Peter that in order to be in love and engaged, he needs to “become a real man.” Because there were three women involved in their engagement.  She revealed that he reached-out to Hannah Brown for closure, and Madison.  She said she should have heeded that red flag then.

Harrison revealed to Peter that he went to Alabama to talk to Madison.  She said that last day in Australia “was a hard day.”  She couldn’t sleep and tried her best not to live in the past.  She said getting in that car, riding away was “so difficult.  The hardest day.”  Harrison asked if she regretted it?  Madison answered “yes.”  She asked Harrison what happened after she left.  He answered that he got engaged.  But, now Peter is single and ended his engagement with Hannah Ann.  She said it breaks her heart.  Harrison asked her if she’s in love with Peter.  She answered that she fell in love with Peter and those feelings don’t go away.  “It’s just a little confusing to me.”  Harrison said Peter ended his engagement because of his feelings for her, and he wants to be with Madison.  After that news,  Madison decided to take Harrison up on his offer to go to Los Angeles to see Peter.

Upon her arrival, Peter was in his backyard looking to be reflecting, then surprised at her presence.  He asked why she was there.  Madison said when Harrison told her about him, that she wanted to see him.  She said what she felt for him in Australia hasn’t gone away at all and was hoping to get closure, but never did.  Peter admitted to making a million and one mistakes, but knows that he felt in love with her, and he messed-up.

Madison came out onto the stage to join Harrison and Peter.  She said she thought they were getting closure in Australia, but those feelings never went away.  Harrison asked Peter “how is this going to end?”  Peter said they both have been “through the ringer on this.”  He said with everything, sitting on the couch next to Madison makes him happy. When asked by Harrison if Peter is going to give their relationship a shot.  Peter said the way he feels for Madison is never going to change. “We have a million and one obstacles” and hopefully it’s all uphill.

NOT AIRED ON THE BACHELOR:

Harrison asked Barbara who was in the audience how she felt.  She said she when she went for Hannah Ann it was because she was so loving towards her and was into her so much.  The next day when they met Madison, they had to wait three hours before she came into the house.  They were exhausted having had traveled around the world, and Madison gave no apology.  Barbara said when she asked Madison about her feelings for Peter, she replied that she was not in love with Peter and would not accept a proposal.  This is what wasn’t shown on the show.  Barbara also added that there was no connection with Madison where with Hannah Ann, they clicked right away.

Madison responded that she’s not ashamed of who she is and promised to be herself  “I’m not a mom.  So, I don’t know what it’s like to have kids.”  Peter responded that at the end of the day, he knows his family has his best interest at heart and their biggest worry was that Madison wasn’t there like he was there for her.  “I know how she feels for me and I know how I feel for her.”  He added that this is the person that he fell in love with and his family needs to give it time.
Barbara said with Madison and Peter, one is willing to compromise and the other is not.  She said they both need to compromise.  Side note: We get that she’s talking about Madison being the one not willing to compromise.

Madison said “this isn’t just Peter’s journey.” As a mother, Barbara  is absolutely looking out for Peter.  But, this isn’t just Peter choosing her, this is also her choosing Peter.  The audience clapped.  Barbara responded that “he’s going to have to fail to succeed.”  She said everyone (friends and family) knows that “it’s not going to work.”    Peter told his mom, “I told you that I love Madison, and that should be enough.”  Peter’s dad said “honestly, I hate the situation.  There were so many obstacles in the way to get to this point.  You don’t start a relationship this way.  There are so many differences to overcome.  When you’re getting into a relationship, that beginning should be the brightest spot, and it’s not.”

Harrison, said he hopes and wishes them the best.  Madison said, “this is about me and Peter, and something we should be talking about.”  Harrison agreed and wished them luck and “every relationship is hard.”

Clare Crawley came out to the stage to talk to Chris Harrison.  Clare said it hasn’t sunk-in yet that she’s the Bachelorette until this moment.  Harrison said she’s never given-up on love.  Clare said she never will especially as she’s developed more self-worth along the way.   Clare said she had been through “some really terrible relationships” and let guys walk all over her.  So, in her break-up with Juan Pablo , she said “no more” and that situation really added to her character.  Andi Dorfman was The Bachelorette to come out of that season. Viewers will get to see Clare’s journey once more in finding love on the new season of “The Bachelorette.”

“The Bachelorette” premieres Monday, May 18th on ABC