The second installment (the first being “Earth”) of the modern-day Disneynature film series, “Oceans” promises a rare look at the world of sea creatures from their own point of view. The film succeeds at this with little narration, and a lot of observation.

The key ingredient to this film is patience. A lot of patience is what French filmmakers, Jacques Perrin and Jacques Cluzaud had in order to capture a rare up-close and personal glimpse into the sea life of such marine creatures as: Blanket Octopus, Fur Seals, Dugongs, Sea Turtles, Humpback Whales, Lion Fish, and Ribbon Eels, just to name a few. It definitely paid off though as you can see looking at what they captured. 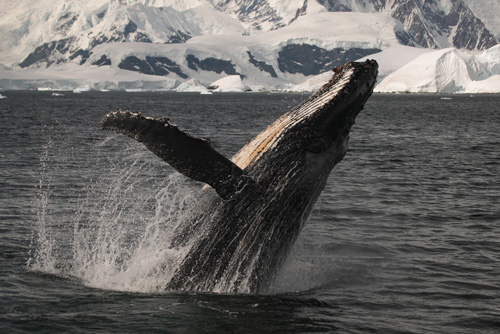 The beautiful visuals are lightly sprinkled with the rich voice of actor, Pierce Brosnan. OCEANS is not purely an educational film, but a sea animal admiration film. It’s shot from an observational perspective, and is filled with scenes of survival, animal interaction, emotion. The only signs of human presence in the film are of a young boy gazing at the ocean, a brief scene of polluted waters, and a ship of fisherman.

The main oceans that are featured in the documentary are: South African, Australia, The China Sea, Monterey Bay, Mediterranean Sea, and ending the oceanic journey in the Alaskan and Antarctic Seas where most of the marine life are travelling to.

Other versions include Italian and Japanese, NOT narrated by Brosnan. Young Disney stars Joe Jonas and Demi Lovato lent their voices for the ending credit song “Make A Wave”.

Although a nature exploration and celebration of the elusive sea dwellers, the Disney mark is evident in OCEANS. The settle emotions expressed by the sea creatures portrayed by deep instrumental musical pieces (supplied by Paris Philharmonic) , is reminiscent of earlier cartoon films by Disney such as Fantasia, and Bambi. Life lessons are learned and shown through the camera’s eye as a Leopard Seal awaits patiently to coax her baby into the icy cold waters for its first swim, or when newly-hatched sea turtles must race for their lives into their new water world. Images of these animals are so incredibly sharp that at times, these creatures appear to be digital animations.

Stay tuned at the very end of OCEANS during the end credits for special behind-the-scenes footage of the underwater crew showing how key scenes were shot.

Viewers will take with them beautifully photographed scenes of dominant monochromatic tones with pops of color, as well as rare camera angles and footage of a world we have never seen before like this! OCEANS captures an impressive understanding of how these animals continue to survive among a world of strong human influence.