Out With A Bang! THE VOICE – Live Shows Week Seven Finals Recap

Voiced Like No Other! WALKING WITH DINOSAURS 3D Sneak-Peek!

Out With A Bang! THE VOICE – Live Shows Week Seven Finals Recap 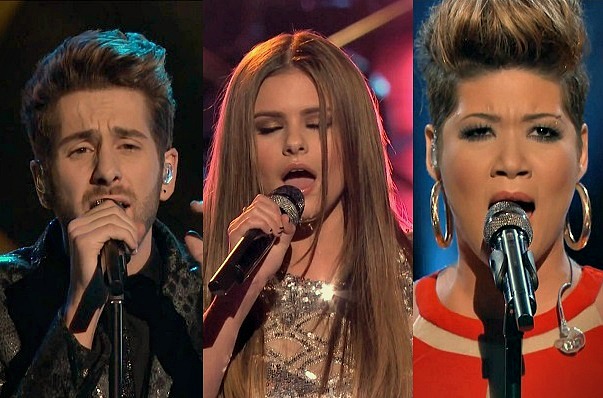 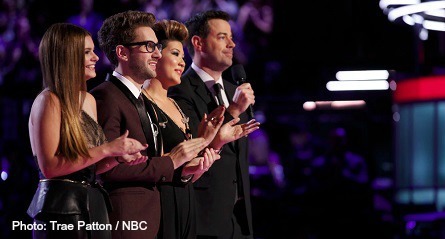 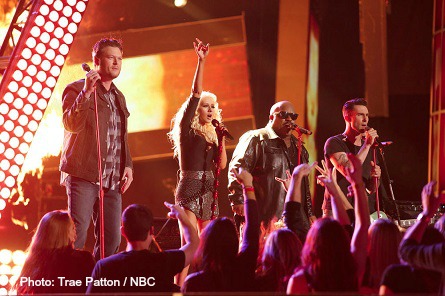 Coaches Blake Shelton, CeeLo Green, Adam Levine and Christina Aguilera performed “Pour Some Sugar on Me” by Def Leppard with the help of original Def Leppard band who played along. 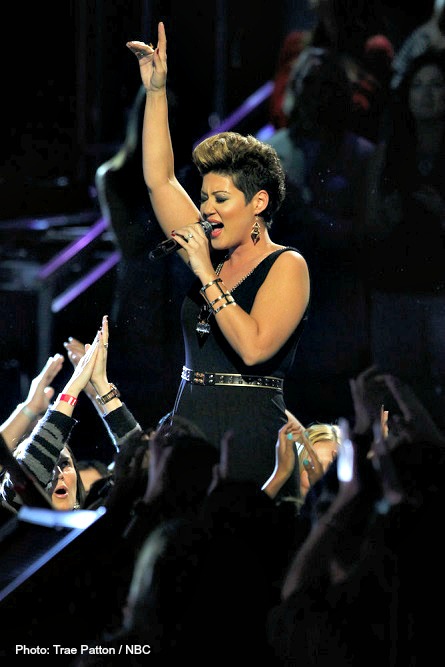 Tessanne sang Pink’s song “Try” during her blind audition. Adam Levine said he knew he had to be part of it (Tessanne’s journey) and knew she’d be here at the end. Adam told Tessanne, “I think everything you do just draws me in. It’s funny being your coach because your ability is just so incredible. I just rival in it. Every moment that we’ve had together has been fun…” CeeLo said he was really proud of her and she’s improved and has evolved because of “this opportunity.”

Host Carson Daly posed his weekly questions to coaches from fans off of Twitter. One question was played-out by the coaches which was, “how come coaches never switch chairs?” Christina and Adam switched chairs. Blake was in CeeLo’s chair. Christina said about Adam’s chair, “It feels very warm, very sexy.” Adam said about Christina’s chair, “the chair smells a little bit like alcohol.” Blake said he didn’t realize that there are booster seats in these chairs. 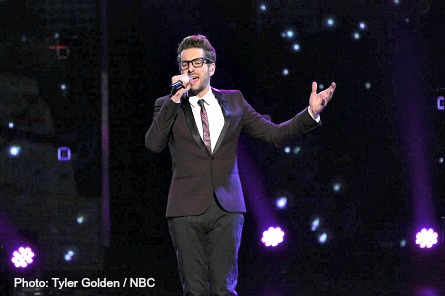 Adam said Will has shown his resilience by being on the show this long. Will sang “Not Over You.” Will started on Adam’s Team, then moved to Christina’s, then was stolen back to Adam’s Team. Coach Adam said, “There isn’t anybody that works harder than Will. You work so hard that it’s stressful. You’re a guy that wouldn’t be here today if you didn’t work hard and that’s inspiring. There are times when you should have second guessed yourself, but you never did. I’m most proud of you in a way because you’ve overcome most of the challenges in this competition.” 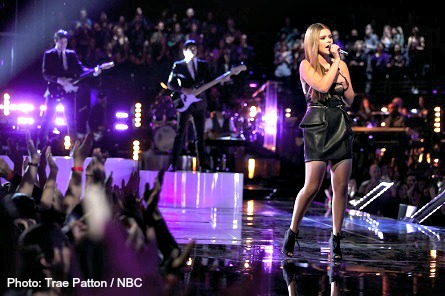 Coach Christina said about Jacquie’s blind audition performance, “I heard this roar and I was immediately captivated and I saw this little girl with this huge voice and I said this is a girl that can take it all.” Jacquie sang her blind audition song “Back to Black” again.

Christina said to Jacquie after her performance, “I really get so much joy out of watching you do what you do. What is amazing is at sixteen to be on this journey with you. I grew up in a similar background….you make me smile and you make me enjoy everything that I do in this chair and watching you just kill it every single time. It’s one thing to be blown away. There is just something so special inside of you.” 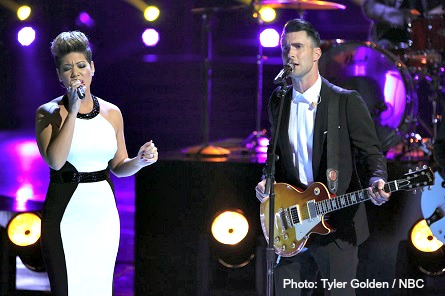 TESSANNE CHIN performed “Let It Be” with her coach Adam Levine with a Jamaican twist midway in the song. 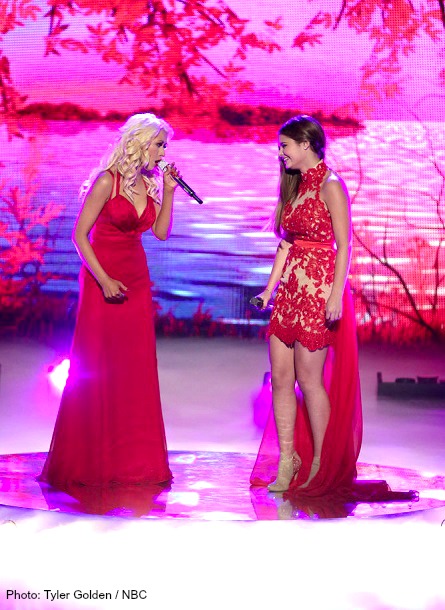 Jacquie Lee and her coach Christina sang “We Remain” for their duet performance. Christina said during rehearsals of their duet, “This song is hard for anyone to sing let alone a sixteen-year-old to knock it out of the park.” Christina asked Jacquie’s mom what she put in her baby bottle. 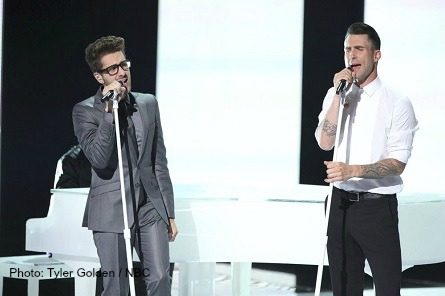 “I love the fact that there’s a guy in the finals that’s a musician,” said Adam about Will Champlin. Adam said he thinks him and Will are cut from the same cloth. They sang “Tiny Dancer” together by Elton John.

Daly sounded out another fan question with a fan asking if Blake will give her permission to have his face on her birthday cake? The show says his face is copyrighted! Blake said, “I’m going to go over there and put my face in her birthday cake!” 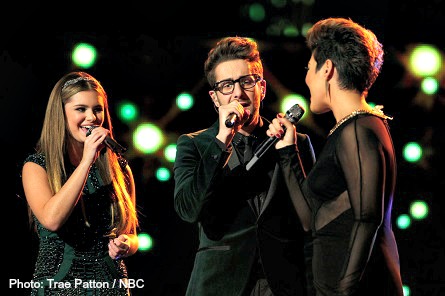 Jacquie, Tessanne and Will sang “I’ll Be There” by The Jackson 5 for their final song together.

Tessanne Chin said of her singing her blind audition song “Try” was her trying again. Adam said “Bridge Over Troubled Water” was the song to end all songs. Tessanne was a little bit daunted by “I Have Nothing” by Whitney Houston. But, said “it would be nice to go out with a bang!” Adam said during her rehearsal of the song, “Tessanne delivers this song with so much power and charisma.”

A very proud and somewhat choked-up coach Adam said about Tessanne’s final performance, “I don’t have thoughts right now, I just have emotions. This is sacred ground. It’s something people stay away from because it’s one of the greatest vocals ever. It’s absolutely captivating, mesmerizing and unlike anything I’ve heard before. You are capable of anything, and it blows me away. I know in my mind and my heart, you’re the winner of the show.”

Watch Tessanne Chin Sing “I Have Nothing” HERE

Will is the son of a member of the Chicago band. “I think he’s better than he realizes,” said Adam. Adam stole Will back from Christina when she let him go. This is your last chance Adam told Will about performing Bryan Adams’ song, “Everything I Do, I Do For You” from Robin Hood: Prince of Thieves soundtrack. Adam said to Will, “People are more aware of this song than other songs. So, people are expecting things to come.”

A teared-up Adam who was reacting to Will’s closing of his song by kissing his wife and baby in the audience, said, “Dude, you won already. There’s been so many mini-victories. Regardless of the outcome, I couldn’t care less about it. This is a massive victory considering all the crap you’ve had to deal with on the show.”

Blake said, “I always look forward to whatever Will does. Every single team you’ve been on, made it to the finale. You’ve done some over the top vocals, that this was a little reserved. That was well played because you did a solid, really good performance.”

It’s the first time that Christina has had a singer in the finale. Young New Jersey artist Jacquie Lee is a perfect pairing. Christina said that when she first saw Jacquie she knew she “had a presence about her that was undeniable.” For her final performance song, Jacquie sang Jennifer Hudson’s version of “I Am Telling You.” Christina advised Jacquie during the rehearsal, “It’s so powerful, you are just throwing it away. Use all the things that you’ve embodied and put it all into this song. She is ready for this performance, this is her time to shine!”

After Jacquie’s final performance, Christina said, “I’m completely speechless. The amount of talent that you have in that body for sixteen is just unbelievable. I can not believe what I just witnessed. I’ve don this for a really long time. There are few people that I know are gems and going to go a long way. You proved it to yourself you proved it to the world that Jacquie Lee is a force to be reckoned with.”

Blake reacted, “to see your evolution on this show, that was amazing! This is one of the best coach/artist pairings in all the seasons of doing this!”

CeeLo described his finale outfit which was a sparkly silver jump suit, as “disco balls”. Host Carson Daly pointed-out that Christina is in the position to be the first female winner of The Voice. She said “It’s been an incredible journey” with the guys and great reunion. Blake hit his button for all 3 of the finalists during the Blind Auditions. Blake said he got presents for the other coaches.

Jacquie brought back her favorite singers from the season – Cole Vosbury, Caroline Pennell, James Wolpert,and Matthew Schuler to sing “Bohemian Rhapsody” with her.” 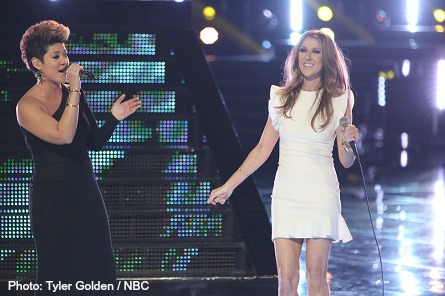 Ryan Tedder wrote a song for the winner of tonight’s Voice which they will sing once the winner is announced. He performed with his pop rock group One Republic performed on The Voice stage.

Will Champlin chose Cole Vosbury, Austin Jenckes, Caroline Pennell, and Johnny Gray as his “bring back” contestants to perform (Rock Me Mama Like A) “Wagon Wheel” song with him.

The parents of The Voice Top 3 talked to Carson about their children. Jacquie’s mom said that she is thankful for this experience. Tessanne’s mom said she is really, really proud of Tessanne and told her “keep being yourself.” Will’s dad said “We’ve been proud of Will for years and years. We just now have more company.”

Jacquie Lee performed with Paramore. Performing “My Life Would Suck Without You” by Kelly Clarkson was Shelbie Z, Tamera, Stephanie, Grey, Amber, and Kat.

Celine Dion and Neyo performed. Will Champlin and Aloe Blacc performed “Wake Me Up.” 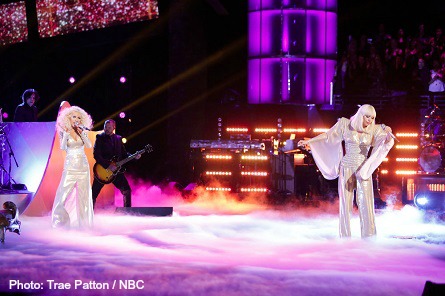 Tessanne sang her “bring back” song with James Wolpert, Grey, Preston, and Olivia. They sang “Hold On, I’m Comin” by Sam & Dave. Next, after Blake proved that he can dance with a very funny Footloose sketch, Lady Gaga performed “Do What You Want” with Christina Aguilera. Lady Gaga said that The Voice called and asked if she’d perform on the show. She said yes, but she wanted to perform with Christina. It was the first time that the two singers have ever met. Christina said Lady Gaga is the most down-to-earth person, and that’s rare to find in the music business.

Jacquie thanked Christina and said she is no only a better singer, but a better person. Will said It’s been an amazing journey and being in Adams presence and learning the whole way has been an “awesome ride.” Tessanne said she thanks Adam every day for turning the rode for him and he’s a solid guy.

THIRD PLACE:
The first finalist announced as being in third place was Will Champlin. The last two left were Jacquie Lee and Tessanne Chin. 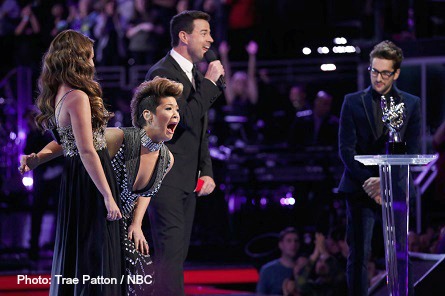 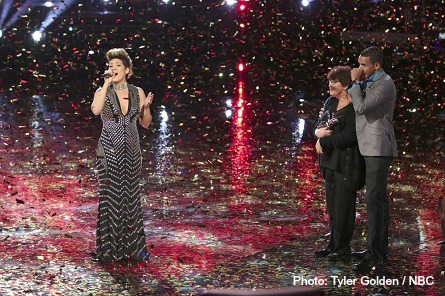 Carson Daly announced that Tessanne Chin is the winner this season!