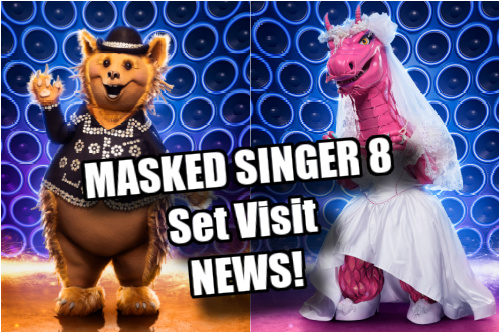 FOX’s fun competition guessing-game show “The Masked Singer” is back for season 8!  Once again, this show continues to impress with ultimate stage visuals and glitzy costumes for the celebrities wearing them.  Speaking of celebrities, the returning sleuthing panel is: Robin Thicke, Jenny McCarthy, Ken Jeong, and Nicole Scherzinger. And, just like last season, these celebrity guessers are NOT competing with each other for the Golden Ear trophy.

Robin Thicke was back to short hair and he wore a suit at this taping. This is his earlier signature look.  Nicole was giving off major Kim Kardashian vibes when she came out sporting really long pink hair and a one-piece catsuit.  The witty, and expert guesser himself Nick Cannon is back as the show’s  host. 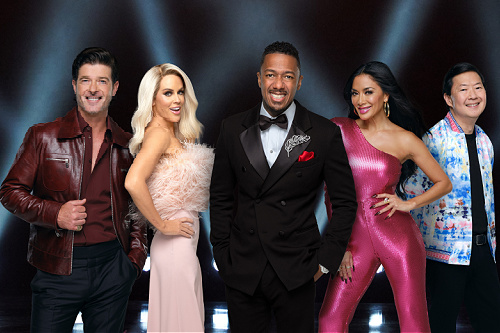 Another part of the game play kept the same from last season is that two masks are eliminated at the end of each show. Jenny, Ken and Nicole said it feels like a finale show each week because of that.

Here’s the major change in season 8, each episode has a different theme.  Some examples of upcoming themed ‘Masked Singer episodes are – TV Shows, Las Vegas, Golden Age.  The episode that HOLLYWOOD JUNKET was visiting the set on occurred during the filming of the second episode this season.  It was the Las Vegas themed episode.

“The Masked Singer” production team did a wonderful job at transforming the whole set into a Las Vegas type venue.  Popular Las Vegas act The Blue Man Group made several cameo appearances throughout the entire episode.  The opening number of this episode is a performance by Donny Osmand who sings “Viva Las Vegas.”  He then joined the sleuthing panel as a celebrity guest.

Viewers will remember that Donny Osmond was The Peacock mask in season one.  Robin reminded Donny that he was the show’s very first performance ever.  Donny said he couldn’t see anything.  But it was a lot of fun.

Some of The Masks revealed at this taping were The HedgeHog, The Hummingbird, the Pi-Rat (like “Pirate”), The Panther, and The Harp.  Other Masks revealed so far are: Venus Fly Trap, The Walrus, Mummies, Scarecrow, Sir Bug a Boo, Avocado, and The Bride.  It seems that this season “The Masked Singer” added Masks specifically for Halloween season with the Mummies and Scarecrow masks.  The first performance of the night was The Panther.  This Mask is a purple panther dressed to the nines.  He performed – Nina Simone’s “It’s a New Day.” He sang this song pitch perfect and it seemed evident that he is a professional singer. 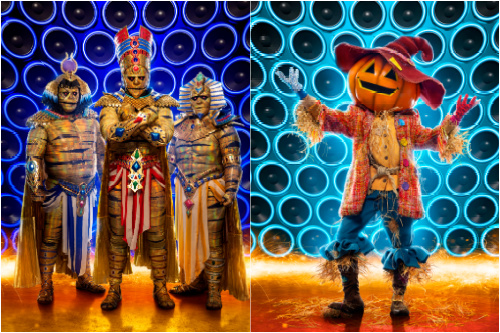 The Panther’s clues included:  “Def fense,” (Jenny linked this clue to Def Jam); “Gone too soon,” (people thought he had passed.  even his mother).  A brown cane was another clue.  A physical clue that was brought out onto the stage was a picture of the world, and the word “Victory.”  The panel guessed he was a member of Jackson Five who performed in the Victory World Tour.  But, because no Jackson member is as tall as The Panther mask, they quickly ruled-out that guess.  They thought he might be an athlete instead because of his tall stature.

Nicole guessed that he has a daughter named Victory.  Because he said it means the world to him.  Some other celebrity guesses for who The Panther might be were:  Brian McKnight, Lance Allred.

The next mask to perform was The Pi-Rat.  Opposite from The Panter, it was obvious that he’s not a professional singer.  He sang “I Remember When Rock was Fun” by Elton John.  He had a puppet to accompany him in his performance.

Some of Pi-Rat’s clues were:  Got Talent, Carrot Top.  He said he moved to Hollywood at a young age. He performed on the Late Night show circuit.  He wasn’t a leading man.  The panelists got that he might be a comedian of some sort.  Pi-Rat had a puppet with him called “Scavey.” 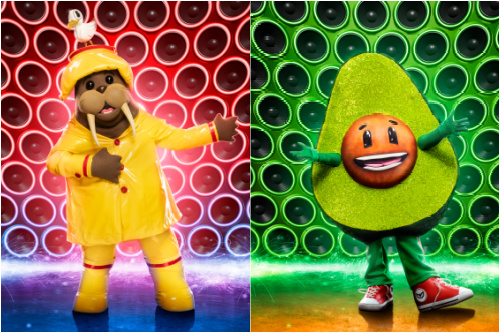 The sleuthing panel’s guesses included:  Dana Carvey, David Spade, Jeff Dunham, Terry Fator.  Ken Jeong thought it may be Robert “Bob” Smigel – the comedian who does “Triumph the Insult Comic Dog.”  After Pi-Rat’s performance, Donny told him that he can’t dance.  Pi-Rat right away took a jab at Donny’s sister Marie Osmond.  Donny ran down to the stage to threaten Pi-Rat (playfully).

The last Mask to perform was The Harp.  She sang “Don’t Walk Away” by Whitney Houston.  She blew it out of the park with major vocals.  She was nick-named “Queen” after last week’s performance (episode 1).

One clue that The Harp gave was that she said she collaborated with Nicole.  Nicole’s wheels were turning.  Nicole guessed Amber Riley, or Anika Noni Rose from “Dream Girls.”  More clues included: dream, and she “rubbed shoulders with Beyonce.”   The sleuthing panel’s guesses were: Amber Riley, Jennifer Hudson, Jazmine Sullivan.  There was a small group in the audience who were 99.99 percent certain that “The Harp” is Amber Riley from “Glee” fame!

After the audience votes were in, the two masks with the least amount of audience votes competed against each other in that “Battle Royale.”  The judges chose the winner.  Some of their comments to the Masks’ last performances were that the song wasn’t the best song to compete with.  But, the way one Mask sang it in this final act was a different tone than how he sang in his earlier performance.  Nick Cannon said he knew who it was.  But, the panel was just confused even more after this performance.  The Mask who won the judge’s vote moved on to the next episode.  The other two were unmasked!