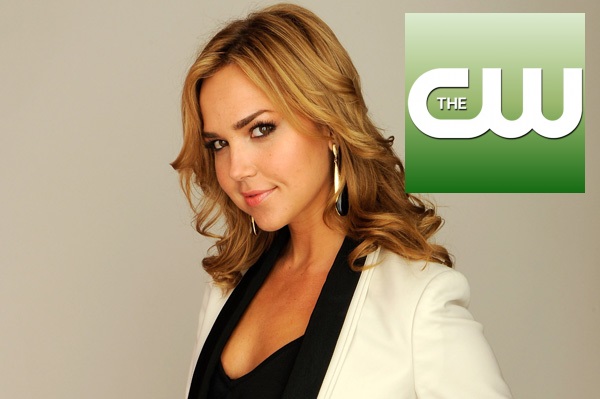 EXCLUSIVE! SET NEWS REPORT!
“Perfect Score” is a new dating trivia game that will be airing this summer on the CW channel. The host of the show is Arielle Kebbel whom viewers will recognize from her recurring role on “The Vampire Diaries” and she also plays the conniving Vanessa from “90210”, both CW scripted series. Kebbel has also been in films “John Tucker Must Die”, and “Think Like a Man”.

“Perfect Score” is quite entertaining. Audiences will enjoy the concept, however some of the guests are a bit boring. They look flamboyant and strange, but when they answer the contestant’s questions, the guests fall flat. Audience members are expecting an outrageous response, and when they fail to receive it, they will probably change the channel.

Once the contestants have been introduced, the host asks the two friends how long they have known each other and what they think about the others dating past. Typically, the friends like different qualities in the opposite sex. The host than introduces the ten guests to the competing contestants.

Here’s where the game gets interesting:
In round one, the guests have five seconds to talk about themselves. After all of them speak; each one of the contestants gets to eliminate one of them. This leaves the competitors with eight choices. Here is where the game gets interesting; each one of the guests is worth a certain money amount ranging from $1-$50,000. Any time one of them is eliminated from the game, their money value goes with them. If one of the contestants eliminates a guest that is worth $500, that is good for them because it is a lower value, however that same guest could be worth $20,000 to their friend!

By the second round, there are eight guests left. The competitors each pick two of them, and ask a question they feel is important to them. They typically ask things like, I am passionate about music, what are you passionate about? Then they eliminate the person whose answer they liked least.

This leaves the competitors with six guests. They get to pick two more guests, to ask them an additional question, and from there they are left with four potential “dates.” The two friends then choose one of them that have to go. By the end of the game, each friend chooses who he or she believes is his or her most compatible date. The friend that obtains the most money wins the game and the date. For example, if one friend has her $5,000, and $10,000 men left by the end of the game, they obviously hope the date they chose is the $10,000 man. If the other friend has her $100 and $50,000 man left by the end of the game, she clearly wants her chosen date to be the $50,000 one.

The host, Kebbel is witty, attractive, and spunky. She will definitely appeal to the younger demographic that the show seems to be targeting. Some of the guests are outspoken, and do not have filters; they are perfect for this sort of television show. Other guests are boring, and pour their hearts out in front of a bunch of strangers, which makes them appear awkward.

The stage is mostly white; when the guests lose, they are moved over onto a white couch. Some of them look sad, while others cheer, smile, and dance. When they lose the other guests typically hug one another, there was a lot of “bromance”, action occurring when the guests were males, and the competitors were females.

The show will be making its series debut on the CW, in the summer of 2013.

Written and reported by: Alyssa Davis