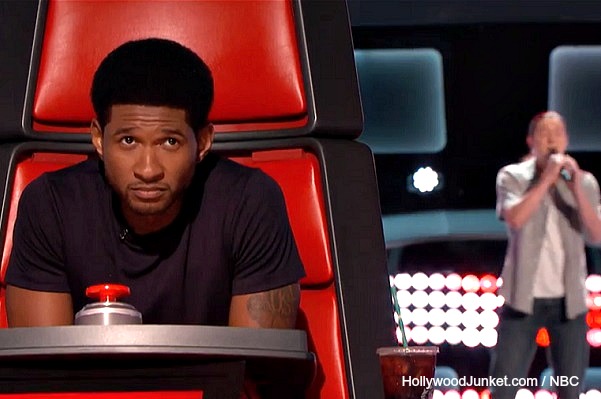 Week two of “The Voice” season 6 blind auditions continues. The second night of the second week has Team Adam at seven out of twelve so far. Team Usher – Seven of twelve, Shakira is at six of twelve and Blake has only four of the twelve that he also needs.

It was a night of confusion and fusion of mixed artists style, some leaving the coaches very surprised. The first contestant up was Megan Ruger – a rocker from Nashville. She’s 26 years old and is from Wisconsin but lives in Nashville.

Megan said, she’s at a cross-road now and hopes that “The Voice” can direct her down the right path. The first song that she wrote was for her dad. She’s always been a big rock fan and decided to sing “Just Like a Pill” by Pink for her blind audition.

Blake said he likes her name, “It just has a ring to it. It sounds like a ‘Team Blake’ name.” She told him that she’s from Nashville.
Usher quickly pointed-out “But you play rock music in Nashville.” She said yes she does.

Blake said before they turned their chairs, Usher was waiting to see what Blake would do because “he has no confidence as a coach.” Usher told Megan, “I plan on being the mentor that brings out the best in you. And is able to recognize some of your short-falls. But I’m able to help make you see you are an incredible, strong, amazing artist.” Blake said, “I just want to win!”

She asked them who likes ’80s rock more? She chose Blake. Megan said, “I felt the Nashville part of me had to go with Blake.” Morgan is twenty-one year old from Noxville and is currently a landscaper. Always loved singing and baseball. Mom & Grandma always been biggest supporters. Right now it’s do or die and I want to do this because I love It

Usher tried to play it off by claiming he let Shakira hit her button first – “Ladies first” he said. Shakira called Usher an amazing coach. Adam said “that’s a love-fest” and decided to have one of his own with Blake! Adam ran over and sat in Blake’s lap.

Shakira said, “your voice is unique and has this raspy tone. I think there are no voices like your voice on the radio. That is why I turned.”

Usher told Morgan, “you have something that is very unique. There were some moments in your performance they were not properly executed and that’s where coaching comes in. You have the potential to be any artist you want to.”

Twenty-six year old James is Vietnamese. He was born in England and moved to the USA at the age of 14. He wants to prove to his parents that the path he chose was a good one. “Making a team would be huge for me,” James said.

Singing “Let’s Get it On” by Marvin Gaye.
Button-pushers: None

Adam said because it was a Marvin Gaye song, the bar was already so high. Usher said, “If you can’t exceed expectations. Don’t try. You have a raspy voice…. I want to hear more of that. I hope you come back.”

Emily said she discovered something called “session singing” which is singing background music to movies. Emily has sung for movies “Pitch Perfect”, “The Muppets”, and CeeLo Green Christmas album. She has a rare eye disease called “VHO.” She ended-up having two brain surgeries totaling twenty-one hours. Emily said she’d like to have even one week with the coaches because “they can only make me better.”

Adam said, “You did a great job, especially that last note which was killer. But I was dumb and didn’t turn around.” Usher, who pushed his button last said, “I took a moment before I hit my button because I wanted to live in the moment and you definitely made it yours. You gave me a lot of hope of what I can potentially do with you including your individuality.”

Blake said I think your falsetto is incredibly strong and you nailed it! Chris Isaak does a lot of different types of things and you choosing that song.. what kind of artist do you see yourself as?” Emily said as long as she can get some soul in there then she’s good.

Shakira said “Then I’m your coach!” Usher said “I think I know a thing or two about soul!” Blake said “First of all, I have a soul!” Shakira won her over by saying she thinks she can help her out a lot and she’d make another smart decision by choosing her. Emily chose Shakira. Blake said he’d like to steal Emily because she has a very powerful Falsetto. Stevie is 19 years old and has 3 sisters which he said he had to help raise. Stevie said he decided to sing “There Goes My Baby” by Usher for his ‘Voice blind audition. He said, “The fact that I’m singing it for Usher is pretty embarrassing. For my parents, it if you don’t get it done, you have to give it up.” He is hoping that he can show his parents that he can get a recording contract by making it on “The Voice.”

Singing “There Goes My Baby”

Button pusher: Usher
While they were listening to Stevie with their backs to him, Blake asked Adam why doesn’t he push his button. Adam said “He’s going to pick Usher.”

Usher was the only coach to push his button. When the rest of the coaches chairs’ turned after Stevie’s audition, they were all surprised by his ethnicity. Blake yelled, “That’s not who was singing that!” Adam sang “It’s a white man!” and that he was pretty sure that he wasn’t a “white guy.” That’s pleasantly surprised that someone is the opposite. That’s why we do the show.

Usher said, “I actually thought you were black too. I didn’t want to react because if this guy (pointing at Blake) had any indication of what I was looking at he would have hit his button and he didn’t and I got myself a Texan!” Adam said, “He sounds like Usher, looks like Blake!”

Shakira said, “Your Falsettos are perfect, you’re dead-on!” Usher’s final words to Stevie were, “I do feel like there’s a lot we are going to be able to do together. Are you ready to win this thing?” Audra is 21 years old. She has a learning disability and said she was bullied in school because of it. She’s now studying to be a medical assistant. She currently has a 3.0 grade point average and said she never thought she’s be on the Honor Roll.

Adam said “I was the first to turn by a long shot!” He said “I was compelled to turn around because of what I heard. And when I saw what I was listening to, I was even more overjoyed,” he said because she is beautiful.

Usher said, “I really want the world to recognize for the amazing immaculate voice that you are.” Shakira made a good point, “Your voice is out of this world. It has raspiness, sweetness, power. It’s just missing one tiny thing – me. I’m the missing link and I can help you get to the top.”

Blake decided to play the “wife card” on Audra. He said that he used to watch Miranda sing that song night after night. “I was holding you to Miranda’s standard. When you hit that last note, you know those fireworks that go off and they spell stuff? It said ‘Team Blake'”.

While Audra was deciding on who’s team to pick to be on, Adam started to beg like a little boy and put his hands together. She ultimately picked Team Blake. Adam reacted, “Team Blake is the bain of my existence.”

Watch THE VOICE season 6 episode 4 “The Blind Auditions, Part 4” first aired by NBC on Tuesday, March 5, 2014. This full episode is now available at HOLLYWOOD JUNKET until 09/21/14 courtesy of NBC. ENJOY!