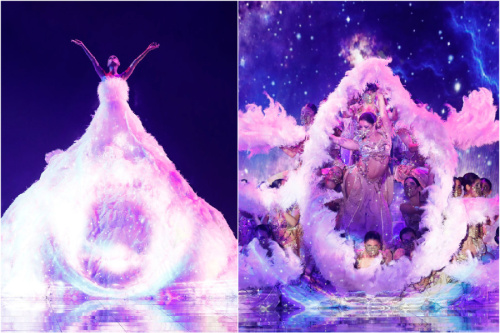 Howie said “winner, winner chicken dinner!” He added that it’s his favorite act ever on AGT.

The stakes are high for the eleven acts who made it through to this week’s “America’s Got Talent” season 17 Finals.  There was zero room for nerves, and all of the acts really laid it all out on the stage.  The winner will receive $1 million and headline a Las Vegas show at the Luxor!

One of the most impressive performances of the night included Sofia Vergara’s Wild Card winner, ventriloquist Celia Munoz who really upped her game and mixed her Opera singing skills with her ventriloquism talent.  Other impressive acts came from the Mayyas who appeared as a large bird, Metaphysic who followed through with their promise of showcasing an icon, Kristy Sellars’ dedication to her daughter, singer Sara James, and Yu Hojin and Chapel Hart both honored America in their performances.

First up was dancer Kristy Sellars.  She said she couldn’t believe when host Terry Crews called her name that she was in the Finals.  Kristy said “If I win it would mean that I connected with the audience.”  She said it’ the biggest compliment of being an artist.  She performed a piece that she created for her daughter who is about to be a teenager.

Howie reacted “OMG.  That was wow, that was perfection.  This is the most high power finale we’ve ever had on AGT”   He said she set the bar and she’s the one to beat tonight.  Heidi said she let us be part of her dreams and we’re watching her dreams.  Sofia said every time Kristy comes to the stage she gets better and better. “It’s going to be so hard to pick who’s the best,” because Kristy is the best.
Simon said he didn’t know what to say because he’s never seen anything like this.  She created all the content and also told a story.  She went from “great to incredible and now you’ve gone to amazing.”  He also said she’s now the one to beat.  Crews asked Kristy how it feels to be in the Finals. Kristy answered that she’s so grateful to have the chance to tell this story. 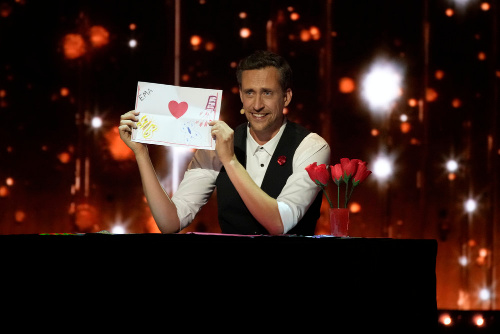 Nicolas said he’s doing this Finals performance for his daughter Ema. He made his act more incredible and bigger than his Semi-Finals performance. In his act, he included a bouquet of roses, a drawing that he daughter did as a young child and used other elements to tell a story.

Heidi said she loved it because he really is different and likes that he told more about himself and his family. She liked that he invented a new kind of magic.  Sofia said she’s glad that he decided to come and follow his dream because the world deserves to know about what he does.
Simon said tonight everyone has to be better than their last performance that they saw before.  He said it wasn’t and the music reminded him of an Aunt playing the piano after lunch.  “It didn’t help the story.”  When the audience booed and Sofia and Heidi disagreed, Simon added “we’re not voting. It doesn’t matter what we say.”  Howie reacted that he doesn’t know what an Aunt playing a piano after lunch sounds like.  But, he told Nick that he made the impossible look possible and it was “amazing.”

Chapel Hart said “song choice is everything” is how they planned to compete with other Country artist Drake Miligan.  Chapel Hart sang their original song “American Pride.”  They summed up their AGT experience as “life changing” because they’ve gotten opportunities that they didn’t know were possible.  They’re ready to win it all.

Simon was the only judge giving a standing ovation.  Sofia reacted that “it’s always so heartfelt and she’s so happy to have them there.  Simon said if it was an audition he would have stopped them to hear it in a capella. Simon said the chorus was beautiful.  He said after 911, “what a beautiful message to hear about.” He loves hearing people like them singing about our Country.  He said some of the vocals were off probably because of nerves. But, whatever.  Howie said he thought that Chapel Hart’s last two performances were three times better. Simon disagreed and said “that chorus was beautiful.”  When Terry Crews asked Chapel Hart about Country music not looking like them, they said tonight they feel seen.

Mike said he’s had this planned for this for 22 years.  Mike said ‘this is a pivotal moment of my comedic life.”  He took a risk and performed new material.  “I know I can win this entire thing.  I know I can do it.”  In his routine, Mike added in a new character, “real kid,” his 12 year old step-son.  Other jokes included family situations.

Simon gave Mike a standing ovation.  Simon reacted “in my opinion, you just did IT.”  He said Mike is “so laser focused” so sharp, and he’s so on it. He’s given himsthe a shot at winning the show.  Howie said Mike comes out like he’s a superstar and he’s only going up.  Howie also said he still wants to work with Mike.  Mike was extremely excited to hear it.  Heidi said Mike has an amazing look, “you’re funny… we love you.”  Soifa said he looks like a star. He’s amazing and relatable and she feels like she wants to hang out with him.  “Will you be my friend?” Sofia asked! 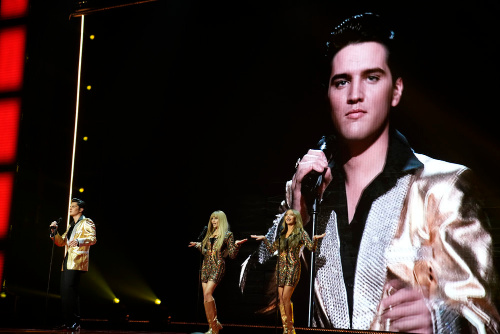 That emotional connection they make with the crowd.  To do that, they’re bringing back an icon.  “It has to be perfect. It can be a bit of a gamble. But, we’re going all in.”  When the tech goes away and you capture an emotional moment in your mind.  That’s what Vegas is all about.”  They want to make the impossible possible.  “I think we’re up for it.”

They brought back Elvis Presley who sang a medley of hits.  The singing image was accompanied by image recreations of Heidi and Sofia singing back-up and Simon Cowell’s likeliness singing a few verses.

Heidi called it “beyond good.” It was great to see the King of Pop again (referring to Simon Cowell), and also Elvis.” She called it her favorite act of the night.  Sofia said she did amazing but not as amazing as Heidi.  “It’s so much fun when you guys come to the show.” She predicted that because of the range of acts, it’s going to be so hard to vote. Simon said “let’s remember what this night is about.  More importantly, it’s about being in Vegas. He said it’ the most incredible original act they’ve had. He said without question, they’re going to have their own show in Vegas. Howie reacted “you look marvelous!”  Metaphysic said “it was a team effort” and they just wanted to make everyone smile.

The Mayyas said being on AGT is giving them a big push for the future.  Nadim, the choreographer, said they sacrificed a lot to be on AGT. They are from Lebanon and it’s not easy to live there. The Mayyas Finals performance was them forming a large bird with very large feathers.  They ended the show by holding lights and coordinated a light show.

The Mayyas got a standing ovation.  The crowd cheered so hard that Sofia had to shout into her microphone.  Sofia said there’s nothing she can say because they are the best thing on AGT…”another level.” Heidi said “this is what a million dollar act looks like.”  They bring their A-game every night.

Simon said this is astonishing. “Something has happened for you where I can hear a buzz beyond the show.  It’s going to be huge.  Howie said “winner, winner chicken dinner.” He added that it’s his favorite act ever on AGT. The audience cheered “Mayyas….Mayyas… Mayyas!!”” Mayyas said to their supporters that they’ve made it this far because of them. 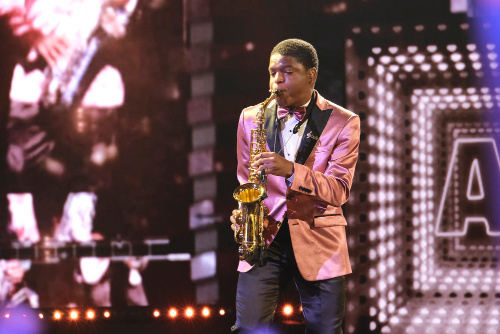 Avery said when he auditioned for AGT he was broken. Avery was teased a lot in his school and he was struggling with mental health.  When he got the Golden Buzzer on AGT from Terry Crews, everything went away.  Avery said when he got back home there were a lot of surprises waiting for him. One of them being that his hometown named a day after him.  Avery said he wants to win. “It’s something I can feel between my fingers.”  He said the AGT Finals has to be his greatest performance and it’s going to be risky because he’s trying new things.  Simon told Avery that he “absolutely controlled the stage, the tempo and everything,” he really “nailed it.”  Avery said he’s gone from local talent to AGT royalty.

YU HOJIN – opened his magic performance by holding up a paper with “AGT ”written on it along with Simon Cowell’s autograph.  His magic act depicted his AGT journey.  This included a notebook full of ideas for his AGT acts, a deck of cards with photos of the judges and host.  He ended his performance by building the paper elements used in the trick on top of each other to form a silhouette of the statue of liberty.

SARA JAMES – Sara James is the youngest performer in the competition at age 15.  She is Simon Cowell’s Golden Buzzer and Sara did an amazing job of performing “Running Up That Hill” by Kate Bush. 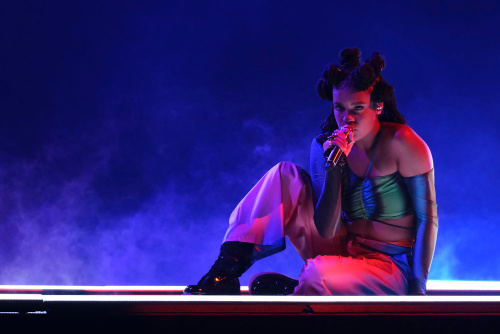 CELIA MUNOZ – Celia is a former Opera singer who’s now a ventriloquist.  From Madrid, Spain, Celia won “Spain’s Got Talent” and luckily she got another shot at AGT after winning the last Wild Card spot of the season selected by Sofia Vergara.  In her Finals performance, Celia upped her game by performing on stage as a medium character channeling an Opera singer. Go figure!  Makes sense.  And she was able to pull it off beautifully.  She also did a phone trick, ate an apple, and drank all while still singing Opera through her throat only without using her lips.  This was an extremely impressive act to watch!  Simon said the only downside is how smart Sofia is because it’s better than her Semi-Finals performance.  Sofia was glad that America brought Celia back.  “it’s an act that is so fun and complete.”  Howie said she’s like a classic vaudeville performer.

DRAKE MILIGAN – Country singer whose young, good-looking and full of Elvis energy returned for his Finals performance.  He ended-up singing his most popular song among his fans which is the same song that he auditioned with for AGT.  That song was “Sounds Like Something I’d Do.”  Many comments from fans have been that this is his best song to date.  That is probably the reason why he chose to perform it again.  At this point, Drake is on the AGT stage for the exposure for his career, because it’s highly unlikely that he’ll win with a repeat song. 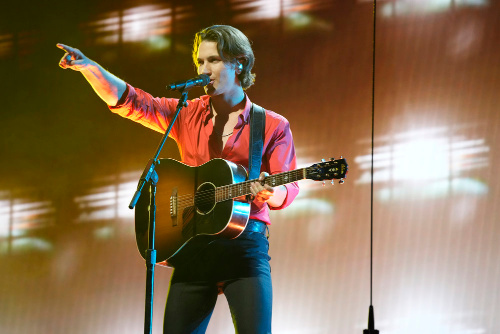