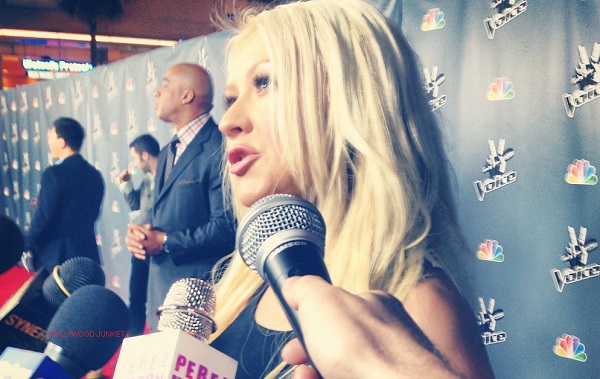 “The Voice’ coaches, fans and former contestants all came out to get a treat to view the first episode of “The Voice’ at TLC Chinese Theatre in Hollywood, Ca. Will Shakira bring the fire? Will Usher woo more singers than Adam? Here are the predictions below.

Christina Aguliera stated to reporters that her time off away from “The Voice” during season 4 will be a much needed break, and that executive producer Mark Burnett “understands artists need their space to be artists. I’m not a robot. I can’t be in front of the camera all the time.” Aguliera said she will rejuvenate during the break that will help to “re-inspire” and offer more as an artist and as a coach.

Seal who coaches for “The Voice’ a If you are an inspiring artist what you want to see is passion from your coach and get constructive criticism.

Fan of the voice and actress, Yvette Nicole Brown (Community) predicts that more singer contestants will chose Usher to be their coach due to his charm over Adam Levine. She also predicts, that “Shakira is going to bring a little fire…that good Latin fire!”

Advice to the new coaches? Aguliera said that “everybody handles situations differently. Usher and Shakira have had amazing careers in this business. I can’t wait to see and be entertained myself for once rather than being in the hot seat with the button pressure. It will be exciting to see what new dynamic that they offer to the show.”

Joel Madden, musician and coach from “The Voice” Australia stated that while working with Shakira this season as her adviser during the Battle Round, that he was impressed by her. “I’ve known Shakira for years.” And that he got to understand Shakira just by being around her. “She’s very smart. She has a precise ear. She can hear things” said Madden.

If any of the past contestants from “The Voice” were on the show this season, would they pick a different coach? We asked several past contestants who were also in attendance at the season 4 premiere. Pip from season 2 (Team Adam) said that he practices Adam’s advice of “making music for yourself and make music you can stick behind”. But, if given another choice, he said he’d pick Adam again. “Team Adam all the way!” said Pip.

Jamar Rogers (Team Cee Lo) also from season 2 of “The Voice” said he’d go with Shakira this season. Terry McDermott (Team Blake) said he’d pick the “big man” every time, and that he’s happy that there is someone (Shakira) on the show “who’s as difficult to understand as Blake”. Jokingly, McDermott said that he recently saw Blake and they couldn’t understand what each other was saying.