The Sloth in the Room THE BACHELOR Season 23 Premiere Recap 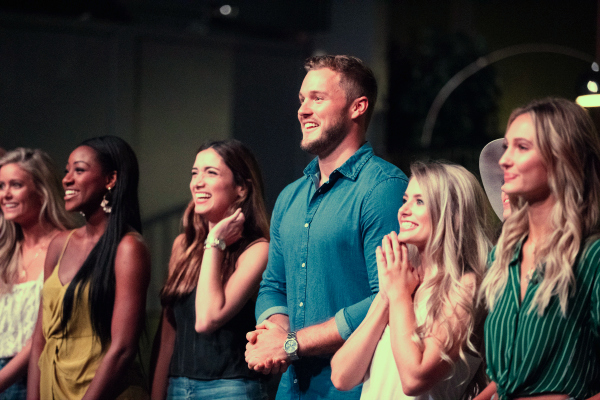 “The Bachelor” Colton Underwood got to know the group of women a bit better this week with two group dates and one on-on-one date. Some surprises came from some of the women who really showed just how competitive they can be where Catherine, who brought her dog last week, surprisingly took a backseat this week. It appears now that she was a red herring.

The first date was going to the theater where they got to tell stories of their firsts. Colton said this date will “set the tempo for the rest of the season.”

Before the date, host Chris Harrison stopped-by the mansion to visit with the women and to present the First Date Card to them. Onyeka told the women going forward she’ll get “more competitive with you girls.” The names on the first group date card were: Demi, Bri, Tracy, Elyse, Hannah G. Nicole, Onyeka, and Catherine. The date card clue was: “you never forget your first date.” This week, viewers saw a much less competitive Catherine over last week when she kept stealing Colton from other women four times to talk to him alone. Some of the other women stepped-up their game this week and showed how competitive they can also be. 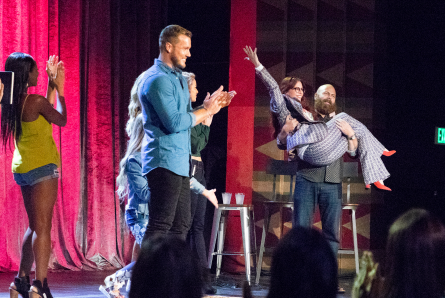 Megan Mulluy and her husband Nick Offerman were on hand to prep the women and Colton for their stories on stage. Nick joked that one day he’ll make love to Megan. Elyse was impressed with Colton’s story. Her story was about being in her early 30’s for the first time dating a younger man and she’ll teach him some things.

SEE Who Our TOP 4 Picks Are For Colton HERE!

Hannah G. said she went through school dance after school dance without getting invited, and Colton made-up for it when she recieved the First Impression Rose. Onyeka ‘s story was saving Colton from “drowning in some bitches.” Catherine argued she’s a good swimmer and attempted to drop the mic, but not only did she drop the mic, she also dropped the mic stand. Tracy told a story of trying to date a virgin, got punched, then by the time she got to the said “virgin” he was not longer a virgin. Accoring to her, he said it was the best sex he ever had! Lol.

Demi’s story was “when I want something, I’m going after it!” She went to Colton in the audience and gave him a big kiss. “That’s the story of how I got the first date rose” stated overly-confident Demi. 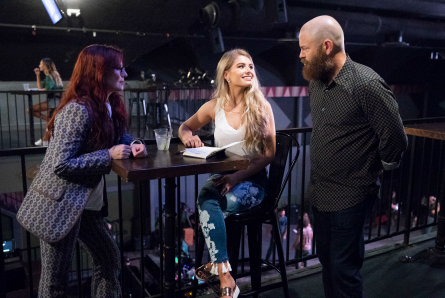 Back at the house: the One-on-One Date Card arrived. The name on the card was Hannah B., and the card read, “True love is on the horizon. – Colton.” It was perfect timing being that it was her birthday – the best birthday ever, stated Hannah B.

Back to the group date: Colton and the ladies went to dinner with a beautiful view of downtown. He told the women what a great day it was and loved how they opened-up and were vurnerable. Demi asked for Colton to go talk with her instantly. During their talk, Colton went in for another kiss. He loved her confidence. Demi stated that she’s “a confidence booster” towards the other women. After she came back to the group of women, Demi picked-up the date rose and said it’s hers. This really rubbed Tracy the wrong way who later confronted Demi about her action.

Colton told Elyse that she “killed it” and it was “sexy.” Colton assured her that “age doesn’t define anything.” Demi spied on Hannah G.’s time with Colton. She reacted that she’s not worried about the other women and thinks he needs a girl that can “take control and take charge of him.” Demi thinks she’s the only one that challenges Colton. “I don’t have any competition here,” stated Demi.

Nicole told Colton that she’s really close to her family and it had to really be important for her to be there. She told Colton about her autistic brother. He was cool with it, and Nicole was ready to marry him.

Next, it was time for Colton to hand-out the date rose. He said he was giving it to someone opened-up and showed who they are. That was Elyse. Demi was confused and dissappointed why she didn’t get it.

Colton said it’s his first Bachelor date and wanted it to be the best. Perhaps a litle bit of foreshadowing of what was to come on this date.

Hannah B. said in her confessional video that sometimes she doesn’t always feel good about herself and when she starts dooubting herself, she starts spiraling down. After Colton did his toast and wished her a happy birthday, he asked her to make a toast. This is where Hannah B. really got stuck and literally couldn’t find words to say. Colton told her to just be real and be comfortable with herself. Then they proceeded to get into the hot tub. In his confessional, Colton said the date hasn’t gone as well as he thought because she needs to open-up. While in the hot tub things didn’t improve between her and Colton’s connection or lack there of. Colton admitted to mis-judging and was concerned about that for future potential relationships.

During dinner Colton told Hannah B. that he doesn’t expect her to be perfect. Hannah B. said she’s not always open and it’s not easy for her to open-up. Then she asked him why he’s a virgin. He explained that he “accidentally” is a virgin because being an athlete, he didn’t allow for any distractions to come in his way. Hannah B. ultimately opened-up to Colton about her past relationships. Colton was content to hear her finally reveal some things about herself and gave her the date rose.

Back at the house: the second date card arrived with the names Alex B., Erika, Katie, Caelynn, Sydney, Tayshia, Nina, Kirpa, Caitlin, Cassie, and Heather. The date card read, “I camp fight the feeling anymore.” Heather was feeling the need to tell Colton about her being a virgin herself as well as never being kissed. This date would give her that opportunity.

Colton said camp is about making friends and having a good time. He said he just wants to have “a good old time.” Among some of the activities of throwing a ball and cooking hot dogs with the women, Chris Harrision arrived with comedian Billy Eichner. Harrison announced that they women would compete in some camp games and the losing team would go back to the house The winning team got to have an over-night and stay with Colton under the stars. 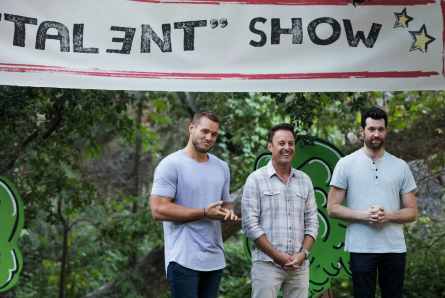 Billy asked Colton if he’s going to wait to get married. Colton once again explained that he’s waiting for the “right woman.” Billy joked that Colton should look into being gay.. He encouraged for Colton to watch which woman does the best three-legged race. The last challenge was tug-of-war which the red team won, and won the prize to stay overnight with Colton while the yellow team was steaming mad as they scampered away. 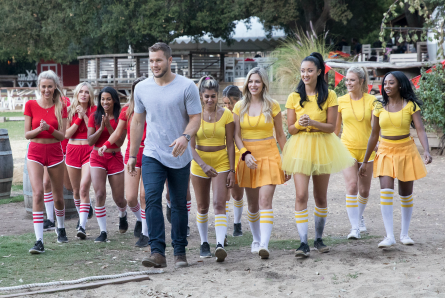 Colton continued to have a strong connection with Katie, while Heather discussed telling Colton about her being a virgin and never kissed anyone to Cassie. She’s afraid that he’ll think that she’s not ready for marriage. During her alone time with Colton, Heather finally had the chance to tell him. Colton was surprised but also said he “respects the heck out of that.” Then, no kiss. Colton looked like he wanted to kiss her, but second-thought it.

During some shakey camera time, Caelynn told Colton about how she almost died around the age of two when she had a swollen brain. Colton gave the group date rose to “someone who was open and honest and true to who they are,” that was Heather! The other women were greatly disappointed as they went off to their cabins. So, Heather and Colton got to spend some time together. Yet, after the commerical break, viewers saw none of that!

Colton thanked the ladies for an incredible week and “some real connections are starting to form.” Courtney got to talk to Colton first, and made a speech which sounded like a job interview after he told her he noticed that she looked like the team leader yesterday. Their conversation ended with hug.

Then Sydney got interrupted with her time with Colton by a blow-horn from Onyeka . After Colton talked to some of the other ladies in the house, his current conversation was with Tracy when Demi cascaded past all the other women in a robe and stole Colton away from Tracy for some private time upstairs in a bedroom to give him a massage.

Demi actually still had her gown on underneath the robe. But, the other ladies pointed-out that it was cause for concern when seeing a woman in a robe, they assume that she has on nothing under it. When Demi heard that Tracy was crying, she went to her aide. Demi openly stated that at 23, she’s not “ready for this,” and doubted that Tracy at 31 was ready.

Colton stated “this is always the toughest part.” But, cherishes nights like this because it moves him forward in relationships and closer to finding a wife. 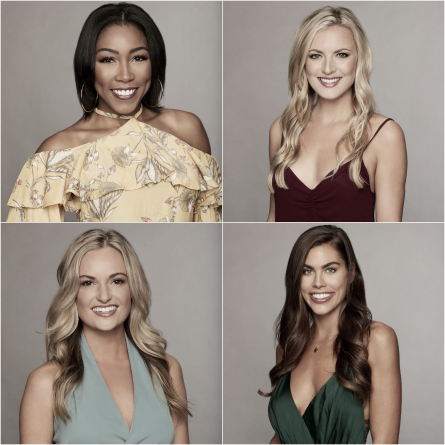