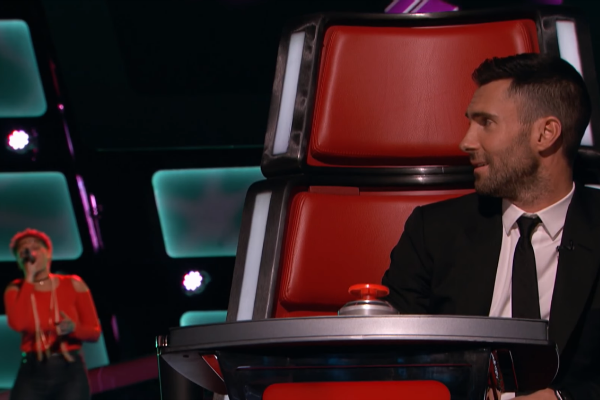 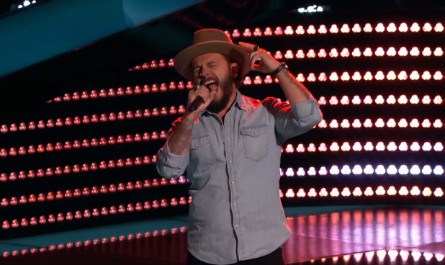 Lane sang “Everyday I Have the Blues”.

Miley was the only coach who pushed her button for Lane. She told him “you’re stuck with me!”

Listen to Lane’s INTERVIEW Below: 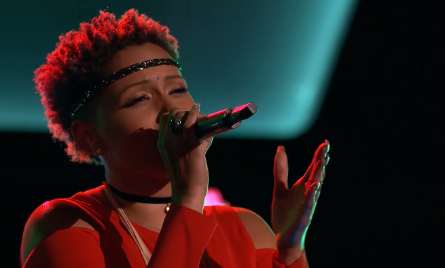 Blake waited until the last second to hit his button and Adam was annoyed! Adam stood-up for Bindi because he wanted her on his team. He said “what I love about you is your choices!” Adam added, “I love you.” Blake, also standing said “I’m clearly the odd man out.” He let he know that he has nobody else like her on his team and promised not to add someone like her on his team.

Bindi picked Adam for her coach.. 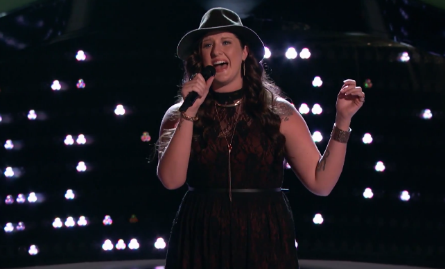 Karlee sang “Samson” by Regina Spektor for her Blind Audition and blew the coaches away with her precise unique sound. But, only Blake and Miley turned around at the same time.

Adam said her voice was “vulnerable” yet “powerful” Miley felt a bit of shyness in Karlee’s performance and said she could break Karlee out of her shyness. Blake told Karlee that there was a lot of different elements to her voice. Hesitant that a couple of falsettos got away from her. “But your full voice made up for that plus some.” He said her “bends are quick enough” and “adds flavor” to her performance. Miley took that opportunity to tell her she could help her on how to use those tricks.

Karlee chose Blake. But, something tells me Blake going to steal her as soon as he gets the chance.

Listen to Karlee’s INTERVIEW Below: 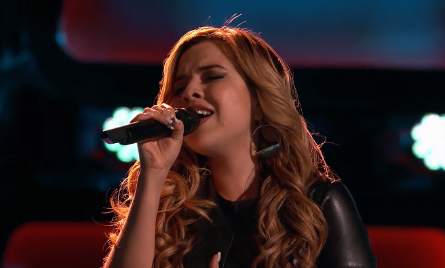 Elia is from El Paso, Texas and makes her living as a party entertainer at kids parties dressing-up as different costume characters one of which is as a princess. She sang in Spanish “Como La Flor” song by Selena for her Blind Audition.

She told Adam that she wants to do Pop music in English and Spanish. Adam said it “was very refreshing.” Blake said his button on “The Voice” is like the button on the radio. If he hears something he likes, he turns it up. “What I do is to make you stand-out above the competition.” Miley argued that People who stay true to who they are will go so far.” Some of coaches kept asking Elia how to say her name. Miley said she’s the only one that can say her name. So she should pick her.

Listen to Elia’s INTERVIEW Below: 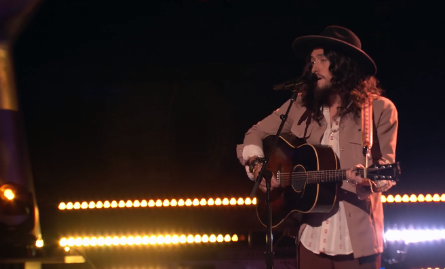 He’s in the ranching business and sang “Forever Young” for his infant son.

Even though Adam didn’t push his button, he called Josh a “bad-ass” and he looks cool. Miley said she felt “wrapped-up” in what he was singing, and loves listening to his voice. Josh told Alicia that he grew-up in Texas and in ranching his whole life working in the cattle business with his dad. He said he wants to use The Voice to be able to provide for his family while doing what he loves. Alicia called Josh’s voice “striking” said although it would be “unique and unexpected” for them two to “rock together” thinks that the could create something powerful. “I know what music that feels good should sound like.”

Blake talked cattle with Josh, and said he’d love to be his coach. Josh said he’s trying to get away from the cattle talk. Adam said Alicia knows the least about cattle out of all of them. Then, Adam said Blake would be the best coach for Josh.

Josh picked Alicia because he said he went with the one with “the most truth.” Blake was upset that he didn’t win-over Josh even after Adam endorsed him as a coach. Josh told Carson Daly that Alicia had the most influence on his music style early on. 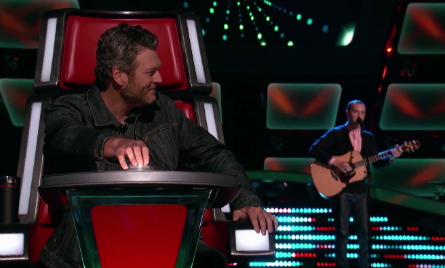 Aaron is from Atlanta, Georgia who left a job as a background checker to pursue music. He sang “Losing My Religion” by R.E.M. for his Blind Audition.

Adam said he was jealous of his voice. Blake asked Adam that’s why he didn’t push his button? Blake said Jennifer Nettles from “Sugar Land” came from that area and he’s a fan of that sound. Blake said he’s got a good track record and would be proud to be his coach.

Alicia told Aaron his voice is such a “special powerful tone” and loved how he made that song his own. “We could come together and make some beautiful, masterful pieces.” Miley said he’s someone she’d listen to in her car and they both have similar “gravelly voices” and would love to chose songs for him to get him go to that place.

Aaron picked Miley for his coach. 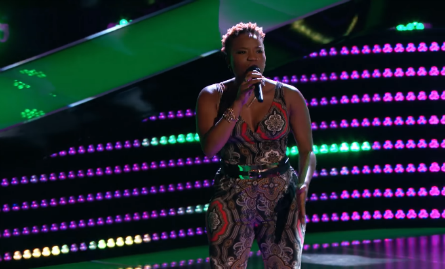 Miley told Simone “I want to help you win this show.” Adam said he thought someone was going to come out with spurs when he was listening to her before he turned his chair, and it’s Simone! He called it “crazy good.” He called himself an animal and will get her on his team and prove himself to everyone. Blake pointed-out that people come onto the show to NOT work with stuffy executive types. However, Adam, who happened to be dressed in a suit, looked like a “corporate” music executive compared to Miley, wearing flowers sewn to her clothing, who looked like a “free-spirit artist.”

Simone picked the corporate type Adam. Adam said Simone has the stage presence that is “fierce.” 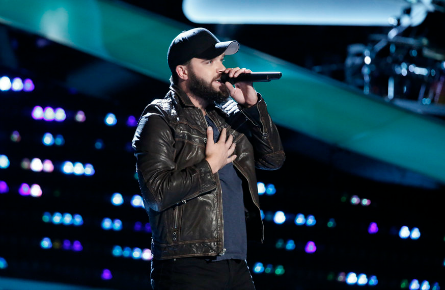 Josh, who’s from Nashville, Tennessee, had dreams to play professional football, but low grades stood in his way from him pursuing it. Now, his passion is to break into music. Josh sang “Stay a Little Longer”.

Miley said she didn’t turn because she know Blake would have it. Adam said he also felt the same, but would like to see Alicia “charm her way” into getting Josh. Alicia said “music doesn’t have a box” and country is “blues and soul”. Blake told Josh that Country music is his life and he has had records on the radio for 16 years now and his goal is to help the next generation of Country artists. 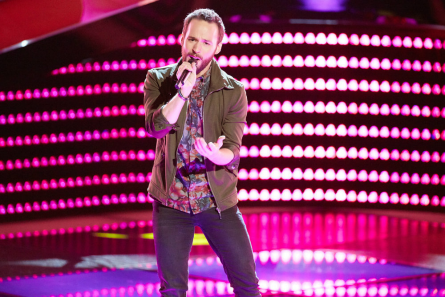 Gabriel is a “onesy model” . He said he always wanted to make music his long time career and dropped out of high school to be in “Spring Awakening” play on Broadway. Gabriel said “The Voice” is his last shot.

Gabriel told the coaches he wants to sing R&B and Pop with a twist. Alicia responded “beautiful job.” Blake said sometimes it doesn’t need to make sense and said it sounded like Gabriel was singing through an auto-tuner because of how he was able to reach the notes. 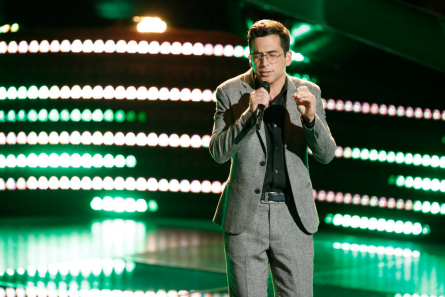 Michael is 25-years-old and sings at a restaurant. He sang old song “Use Me”for his blind audition.

Blake said “it’s Rick Moranis” as he reacted to Michael’s look. Everyone was surprised that Michael’s voice didn’t match-up to his look. Alicia told him, “your voice has the ability to cross different places. We go boozy, or we go soulful.” She asked him, “are you ready to rock?”

Listen to Michael’s INTERVIEW Below: 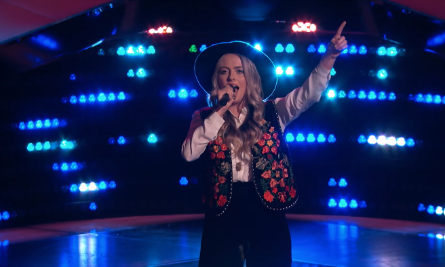 Darby is 17-years-old from Burbank. Her mom moved the family to California in order for Darby to pursue her singing dream. For one of her auditions, she sang “No One” by Alicia Keys and hopes to have her for a coach. For “The Voice” Blind Audition, Darby sang “Stand By Me.”

Blake was horrified that Darby was wearing flowers like Miley! Miley asked her if she knows “Jolene” song then sang it with Darby on stage to prove that she knows what to do with Darby’s voice. Alicia said the power in Darby’s voice is controlled and would love to work with her. Blake said he could hear both the Indie Pop and “Jolene” parts in her voice. Then, Alicia jumped in and started to sing “No One” as Darby joined-in. They sang the song together on stage.

Darby chose Miley because she said their voices have the same things and thinks Miley will know how to help her. 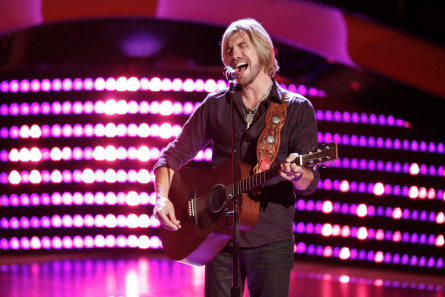 Austin and his Country-Rock band have played over 150 shows and he feels he’s following in his Dad’s foot-steps who is a professional singer. Austin sang “Wild Horses” by The Rolling Stones. It’s emotional because he met his wife while performing The Rolling Stones.

Blake recognized Austin after he turned around. Austin said his Dad sang with Buddy Holly. 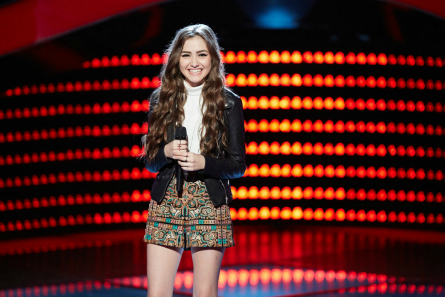 Khaliya is 16-years-old from New Mexico. She’s half Native American and lives on a reservation. Her parents take her outside of the reservation to perform.

Miley said she was pitchy on the “low end.” Miley said she really, really wants to win and said she’ll work longer hours coaching her to ensure it happens. Blake asked her if Country is her passion. Khaliya said she does sing a lot of Country.

Cooper is from a big music family. He sag “I’m Going to Be (500 Miles).” Cooper said he’s at an ultimate crossroad because he’s contemplating on going to law school.

Unfortunately, no coaches turned for Cooper. Adam said he’s getting full on his team and told him to come back. 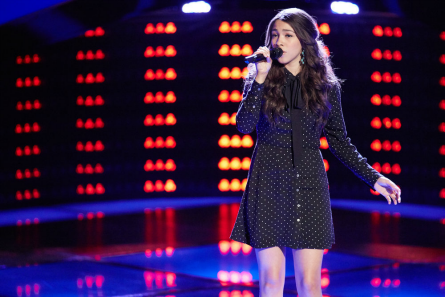 Halle was on the kids show “Barney”. Her Mom and Dad are choreographers and had a studio. When they lost the studio, they divorced. Halle’s mom moved them to Boulder, Colorado when she was 10. It was there that she got into the School of Rock and became an instructor. Halle sang “A New York State of Mind.”

Alicia told Halle, “your voice is an instant recognizable signature. I loved it and and happy to sing the song of my city.” She said Halle “didn’t try too hard.” Adam said it was a big, powerful vocal and she turned it “inside.” He said she has some things to work on and she’s a work in progress. But she has a gorgeous voice with tremendous potential.

Halle chose Alicia as her coach. She said Alicia saying that she sounds like her own artist is the greatest thing anyone has said to her. 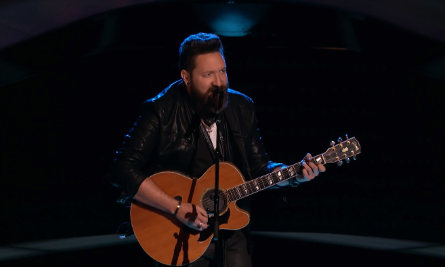 Nolan is 35-years-old and blind auditioned for season 10 of “The Voice”, but didn’t get a chair turn. He said after his appearance, he got an out-pouring of love and support from people responding to his Dad committing suicide. Nolan sang “Tiny Dancer” by Elton John.

Adam told Nolan “you’re going to be the first guy who went home last season and wins this season.” Miley said something about his voice took her home because it reminds her of her Dad’s voice who she thinks has more of a rock, not Country sound. She said she wants to add all Aces to her team. Adam argued back that unlike Miley, he has no one on his team like Nolan. Alicia called his style “timeless, old time and classic.”

Blake said Nolan’s already an accomplished vocalist. He needs a “rock solid” position on the show. “you need to be on a spot that has proven season after a season to get in the finale.

Nolan stayed true and chose Adam as his coach. Adam said Nolan is perhaps the most improved of all time and can’t wait to explore Nolan’s high register.

NEXT WEEK: The final Blind Auditions