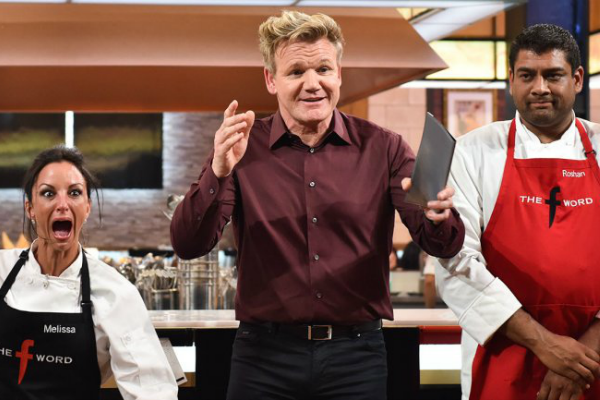 It’s NOT the “F” word that first comes to mind. Yes, surprising considering this is a cooking show starring renowned chef synonymous with FOX network, Gordon Ramsay who’s known for spouting out obscenities while training cooks in the kitchen. This particular food competition show is a bit trickier from the familiar formats of Ramsay’s “Hell’s Kitchen”, “Master Chef”, and “Master Chef Junior”. That’s because this one is live! And this “F” word stands for “food, family, and fun.” 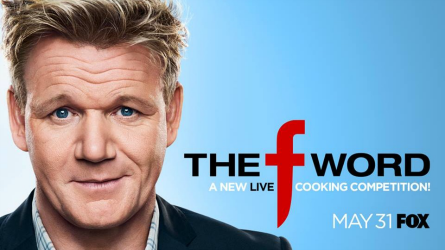 “The F Word” is a nice change of pace from most traditional cooking shows, as well as Ramsay’s image. Because it’s live, there’s much filler content needed to air while the cooks are frantically creating their dishes for 80 people in the upscale diner.

The cooks consists of “amateurs” who are made-up of two teams of four people. During the first episode, one team of cousins, who called themselves “Sexy Paesans” competed against four childhood friends, “Spice Boys”.

A lot of preparation went into the first live show which aired last night on FOX. The show went through several “test” shows where a full house of diners where brought-in to eat at this make-shift restaurant inside of Raleigh studios which sits across the street from Paramount Studios. Each test show was shot as if it were a live show. There’s no re-takes, and each segment and all interviews are strategically timed.

After being seated, diners are told to rate their dishes upon being given to them on a scoring card in the form of a typical restaurant check. Diners rate their meal on whether of not they’d pay for it if it were a real upscale restaurant. Guests are also warned that their responses to their dishes may be captured on camera. Producers scour the floor of dinner guests to get the best reactions, and those are the ones whom get filmed with a second producer asking them questions.

The show also anticipated that during the first live challenge where contestants had to fry-up Alaskan Salmon with corn, and suckatash, there would be some raw Salmon incidents because the test shows, it seemed, purposely brought some lucky guests dishes with raw and under-cooked Salmon. Some were also over-done. The first live episode indeed produced both scenarios from the cooks.

The unfortunate truth, as anyone who has ever eaten at “Hell’s Kitchen” knows, NOT all dinner guest get to eat. We met a guest who was never served because the kitchen shut-down before she got the food. Also, we were told that there were exactly 80 cuts of Salmon for the 80 guests. Therefore, no redos from the cooks who are also under extreme time constraints.

In the this live show, Ramsay was seen reprimanding these amateur cooks while showing them the raw fish. Then told them to “re-fire” it. However, during the test shows, diners who had the mishap dishes, did NOT receive a corrected, fully cooked one.

The live premiere’s time-fillers while the cooks were in the kitchen grilling, were interviews by Gordon himself with celebrity guests Jamie Foxx and Snoop Dogg. Jamie Foxx stopped-by and sat at the bar. He talked about his new hosting gig, also airing on FOX network, on the game show “Beat Shazam!” Foxx commented on the set, “I just walked into an experience! I really thought I was at the club right now!” Snoop Dogg was seated at a back table with his son and daughter while Gordon got to know them a little better. Before leaving their table, Ramsay promised Snoop Dogg that his food is better than Martha Stewart’, referring to the cooking show that Dogg currently co-hosts with the famous Arts & Crafts cook called “Martha & Snoop’s Dinner Party” which airs on VH1. 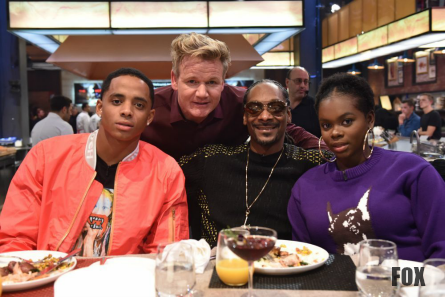 The irony of the title “The F Word on FOX” is that it’s geared as a family show. There’s no profanity from the host, only a few from another celeb guest Kevin Spacey, which were bleeped-out. There are some family aspects to the show such as when Ramsay show’s off his more charming side while talking to diner guests, two of which also included a young couple on a date for the first time.

More time is filled with outtakes of Ramsay playing practical jokes in a disguise, and on-location visits to celebrities homes (of supposed homes). This week, actor Kevin Spacey was featured. An educational tutorial video was thrown-in of Ramsay teaching viewers how to make the same dish that was being served in the episode.

A bit of the familiar Ramsay personality is featured via his Twitter game that has been brought onto this show as another time-filler. It’s when he asks fans to Tweet him photos of their dishes as he replies back with pure honest, nasty comments. However, those comments were toned-down for this show.

Once the kitchen is closed, the votes from the diners are tallied to produce a winner. The winning team get to move on to the Grand Finale show to compete to play for $100,000. Out of the 80 diners, whichever team has the highest percentage of them who would pay for the dinner is the team that wins and moves on. In the premiere episode, the final score was 43% vs 68% approval rate.