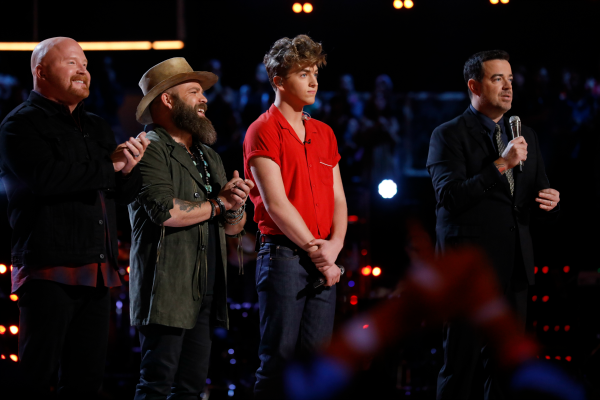 On Monday’s episode of “The Voice”, the Top 8 performed in the first night of the Semi-Finals ‘Voice week. They had two chances for votes. The first was a solo performance of a song of their choice, and the second was a duet performance with another Top 8 artist. Both performances were eligible for votes.

Night two of the Semi-Finals eliminated half of the artists, leaving us with four, “The Voice” Top 4. When it got to the final vote, it was a narrow margin which was shown when the voting poll numbers were broadcast. Team Adam’s Adam Cunningham opened the show. 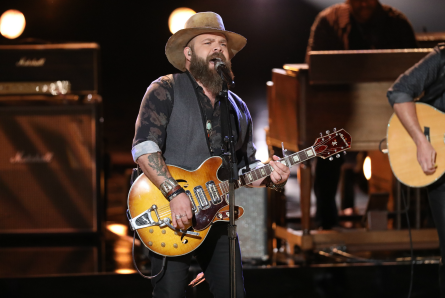 Coach Adam told Adam that he trusts him with his songs more than he trusts himself. Thus, giving Adam C. the power to choose his own songs for the rest of his time on “The Voice.” Adam said he’s singing a massively powerful ballad about “longing for home.” He said if you don’t get punched in the “feels” from this song, you might want to check your pulse, stated Adam Cunningham.

Blake reacted that he’s really glad that Adam’s picking his own songs now. He said he can tell that the lyric means something to Adam C., and he sang the hell out of it. Coach Adam Levine said that’s as good of a response that I could ever gotten from Blake Shelton because he wants to hate everything that he does. He told Adam that’s he’s done an amazing job with his back against the wall. “Here you are as one of the top contenders.”

Noah and Chloe performed together.

Last week, Davon was in the bottom for the first time and said he was “really fighting” for his dream. This week, he sang “Gravity” by John Mayor. He said he’s done with homelessness and dealt with diversity, which is why the song speaks to him. Jennifer called him an inspiration and a light. Davon said there’s no Plan B for him.

All four coaches gave Davon a standing ovation. Adam was shocked, “What?!” Adam said Davon has an ability that is unlike any other ability that he’s ever heard. The only critical thing is that Davon scaled it back “a little” and people felt him the way he wanted people to fell him. Jennifer said his heart was in it and what Davon did, she can’t coach him on that. That was your passion, your belief in yourself, and your story.

Red said he’s going from Top 8 to Top 4 and will need to bring his A game. Red sang “Go Rest on that High Mountain” by Vince Gill. Blake said the song is “a tall order.” He told Red he’s literally singing for his life. Blake said it’s a great time for Red to show he can go against the compeition. Red said he lost his best friend twenty years ago and in singing the song, Red is thinking about him. Red performed without his guitar.

Miley said she flashbacked to the Blind Auditions when she “groveled” for Red. She said he’s so authentic, and let them all feel him. Coach Blake was confident enough in Red’s performance and said every Country music fan that loves and appreciates that song realizes what he just did with that song. Blake added that Vince Gill is probably smiling.

Davon and Brooke sang “Earned It” by the Weeknd.

Rascal Flatts told Keisha Renee that they’d like to do a duet with her someday.
Blake said no one else is left that can do what she can do. Keisha sang “What Hurts the Most” by Rascal Flatts. Blake said Rascal Flatts is inovative and that’s why Keisha is going to be poplular. Rascal Flatts called Keisha on the phone to lend some encouragement and support.

Miley said “I know Blake is freaking out right now.” Every song Keisha has done is classic. But, she does them her way. And proud of how far Keisha’s gotten. “This is AMAZING for Country music.” Blake said he knows that the orignal artist is saying “dammit, I should have been doing it that way all this time!” He added that she should have secured her spot on Top 4 with that performance. 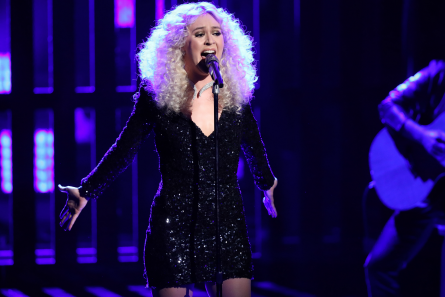 Chloe was in the Top 10 on iTunes last week. She told Blake that she wanted “a Landslide moment meets an Eclipse of the Heart moment.” She reminised of a time when nobody believed in her and wants to tap into that emotion and vunerablity. She said Blake’s believing in her is the reason that she’s still on “The Voice.” Blake predicted that her song pick “I Want to Know What Love Is” will put her on the Top 4. She wants people to be very clear who she is as an artist.

Blake stated, “Chloe, this IS the biggest night that you’ve had on the show so far.” He urged audiences to re-watch her performace. 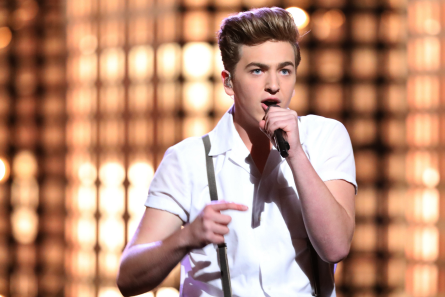 Noah said last week’s performance was slower and wants to amp it up this week. He said he wants to go back to the begining when he came out with a lot more powerful song. This week he chose “Like a River” song. Jennifer called the song “the modern day Eye of the Tiger.” Jennifer said the energy was right and Noah was “in it.”

Miley told Noah that “every performance you’ve done since the beginning, you have a reason. She added that Noah has created an amazing story for himself. Jennifer said “mama J Hud is very proud along with your mama.” She was proud of Noah’s confidence and that Team J Hud is all about believing in yourself. His performance made her forget it is a compeition. It was like she was witnessing his concert. 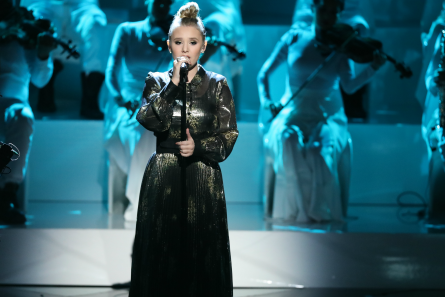 Addison said she’s so grateful for every experience on “The Voice”. Adam said he loves the Joni Mitchell song. It’s powerful and wants Addison to transcend the song and told her to “swing for the fences.” Joni wrote the song at such a young age which is Addison’s age now. So, she can relate. Adam predicted that she will thrive beyond the show and she is “the voice.”

Blake said “I’m such a fan of yours and I really appreciate you being a flagship on this show for teenagers. You are so beyond your years, it’s unbelieveable” Coach Adam said “this is tha time that I’m usually so in competition mode. Addison, you have changed the way I view the game. I’d rather you sing the songs that mean the most to you and the songs that have the biggest impact on your fans.” He added “this girl is the Voice and is beyond that. He said she’s the most special gift that he’s ever had to work with.

Miley said Brooke got into the Top 10 on iTunes and into a new fanbase with her performance last week. Miley stated that Brooke has tackeled Vintage, soul, but never tapped into the rock ballad. Together, they decided to do “Faithfully” by Journey. Miley said, “I want this performance to be based on her vocals,” to prove that Brooke is “the voice.”

Miley, standing, said “we almost burnt the place down” with Brooke’s performance. Miley told viewers, “If this show is about the voice, your winner is standing right here!”

Before host Carson Daly announced any of the results from America’s votes based on the Top 8 performance from Monday’s show, he asked all of the coaches about their Teams.

Blake advised to his team “find that song that you can sing that leaves nothing on the table.” Jennifer said she loves the people that Noah and Davon are and how they represent throughout the competiton. Miley said she sees a lot of her and Brooke working together and fans can look forward to a record from her. Adam stated that Adam Cunningham has had to fight his way out of the bottom twice. He’s getting better and better. He thinks Addison is a unicorn.

Host Carson Daly stated that every aritst hit the Top 25 on the iTunes singles artists. One artist hit number one.

Davon said he’s learnt that he can talk about Christ and still be accepted. Brooke said she didn’t know an opportunity like this could happen to her and Miley was her one “yes”. She wants to make sure Miley is represented in the Finals next week.

Next, a music calloboration from Machine Gun Kelly performed.

“The Voice” caught-up with last season’s winner, Chris Blue, who is working on his new single in the studio. He said “The Voice” taught him how hard he has to work in order to be successful. Chris Blue will be in the Finale show next week

The remaining Semi-Finalists stepped onto the stage. Addison said she wants to bring folk music back in her original music that she’ll put out after the show. The second finalist announced was – Addison Agen (Team Adam) who is the youngest in the competition.

Jennifer Hudson performed and brought the house down!

Next, the remaining six finalists came back onto the stage. Noah Mac said he’s been influenced by the Voice – the amount of work that it takes, and the drive to be successful like the coaches. The third finalist was announced as Brooke Simpson (Team Miley).

The cast of The Voice Neon Dreams performed.

Red said to be able to do something traditional means the world to him. The three artists that would perform for the Instant Save vote were: Adam Cunningham (Team Adam), Noah Mac (Team Jennifer), and Red Marlow (Team Blake).

The last artists left were Keisha Renee and Davon Fleming which meant, unfortunately they went home.

Adam said Adam Cunningham was in the bottom 2, two weeks in a row. Last week he was up with everyone else. “It’s poetic that he should make it to the finale and has everything to be in the finale.”

Singing “Sign of the Times” for his Instant Save song was Noah Mac. Jennifer said we need peole in the industry with talent like Noah who creates their own lane.

According to the Instant Save poll after the commercial break Adam Cunningham had 27%, Noah Mac at 36%, and Red Marlow had 37% of the votes. 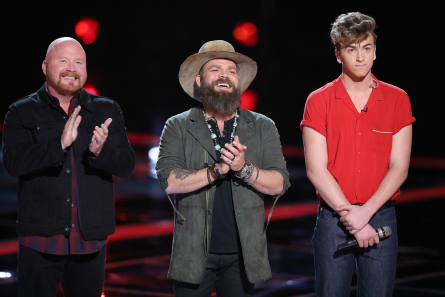 Jennifer said it’s hard to compete against Blake and Adam who’s been doing “The Voice” for years. She urged people to vote for Noah. Blake said when Red auditioned, he didn’t know what he envisoned. “But man, you have blazed a hell of a path,” and said Red got the attention of Nashville. Blake said he’s putting his bid in now to get Red booked for a venue! Coach Adam said Adam C. will NOT go quietly into the good night. “There’s nobody more humble and more diverse” as Adam. He said Adam constantly beats the odds each week.

America Instantly Saved the fourth finalist who was RED MARLOW! 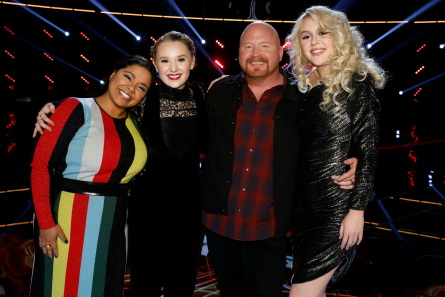