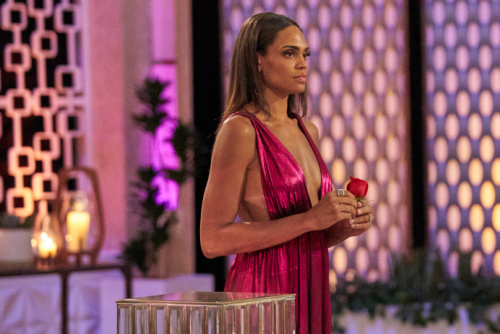 The second week of “The Bachelorette” season 18 showed Michelle Young sitting outside getting some advice from host and previous ‘Bachelorette Tayshia Adams.  Tayshia gave her advice that if a guy is quiet, give him a chance, and some time.

While inside, the men were greeted by other host (and a former ‘Bachelorette)  Kaitlyn Bristowe who told the men if your name is on that date card, it’s your time to shine.  She she whipped out the first Group Date card. The names on the card were: Brandon, Romeo, Rick, PJ, Will, Olu, Casey, Daniel, LT, and Peter.

In this episode, Michelle got to know Jamie better on a one-on-one date, who then stirred-up some drama by the end of the episode in the same fashion that Karl did on Katie Thurston’s season.  We also saw a throwback from Tayshia’s season when Michelle had a groupd date with the men in an elementary class where they had to answer various questions pertaining to Math, Science and Spelling.

Michelle’s second group date was a basketball date and we got to see her (and Joe) in their elements.  The episode ended with a bit of drama caused by Jamie spreading a rumor about Michelle to the men.  Michelle had to address it, and followed-up with the Rose Ceremony.

At the start of the group date, Michelle greeted the men and told them that she has “three friends” there with her.  The men were led into an elementary classroom.  The friends were three “exceptional fifth graders.”   The guys had to sit at desks and take a quizes by writing answers onto cards, then holding them up for everyone to see.  Similar to Tayshia’s season when Bennett, who went to Harvard, was shown as not the smartest of the group.   Peter and Branon had the hardest time with the school themed challenges that included- Math, Science, Musical Chairs, and Spelling.  When the men were asked to spell the word “narcissit,” Will wrote “Peter” on his card.  Everyone laughed.  Peter was pretty upset about it. 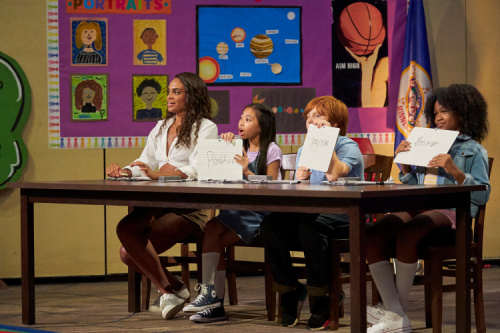 In the evening After Party portion of the date.  Brandon was the first man who got alone time with Michelle and tried to be smooth and woo her by telling her he was trying to remember every single part of her so he can go home and dream about her.  This made Michelle laugh and she told him that was “corny.”

While the men waited for their turn to talk to Michelle, Peter called Will to talk in private.  He was heated about Will calling him a “narcissist” during the Spelling contest earlier in the date.  They were screaming at each other so much that Michelle could also hear.

Back at the house:  The first one-on-one date card arrived.  It read:  “Jamie, I’m looking for someone to be my rock.” Jaime said he wants to know if Michelle is “right for him” because he travels around a lot.  Chris S. thought Jamie wasn’t grateful for getting the one-on-one date.

Back to the group date: Rick also got alone time with Michelle, and found that he is really falling hard for Michelle.  After that, Michelle pulled Peter to talk to alone to ask him what was all the yelling about.  She told him that if she upsets him down the line, his screaming, “at that point, nothing is going to come across.”  After that conversation with Michelle, Peter said he felt that he was starting from square one again, and lost out on the Group Date rose for sure.  Michelle ended-up giving the date rose to Brandon, whom she has tons of chemistry with.

Jamie and Michelle went to Joshua Tree.  There was a physical challenge involved from the start.  They had to climb up a rock to reach their location for a picnic.  After reaching the top of the mountain and sharing some champagne, they reconvened for an evening dinner.   Michelle talked about how she wants to find a partner to share her life with much like her parents have.  Jamie seemed a little bitter of not growing up in a stable home like Michelle.  This came across while he explained his story.  However, as his story of financial hardships as a kid progressed, it got sadder and sadder.

Jamie described walking by his mother when he was in high school and witnessing her trying to slit her wrists.  He eventually stopped going to school so that he could stay at home to watch his mother.  Jamie’s mom committed suicide when he was 24.  Jamie said “nothing really mattered any more.”  He said he had to decide why he wanted to come back to life.  “People are worth it, relationships are worth it.”  Michele was crying over his story and said although she doesn’t know him very well, she’s proud of him and said it’s amazing what he’s had to navigate through.   Michelle gave Jamie the date rose.  She said she now knows “the vulnerable” side and she’s capable of being his rock. 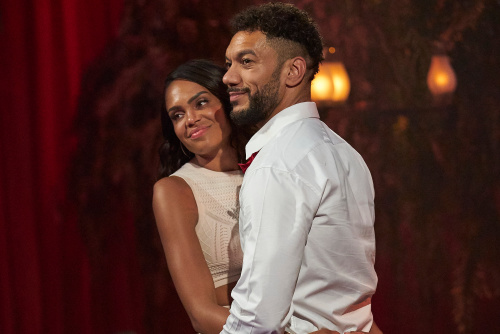 Michelle said she thinks she’s compatible with Jamie and could see a life with him.  Singer Caroline Jones serenaded the two after dinner. Jamie said he learned that life can be hard, but it doesn’t stay hard forever. 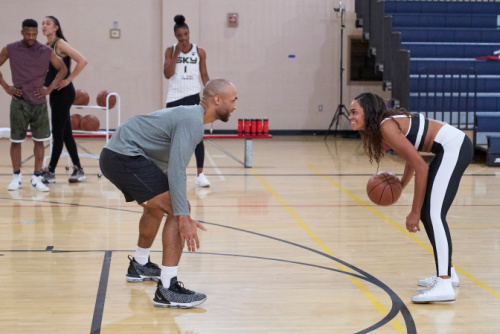 The next morning back at the house, Joe was sitting on the couch on the phone with his mom crying.  He had just gotten news that his former basketball coach passed-away.  Ironically, the second group date card read:  “All is fair in the love and war of Basketball.”  Michelle said by playing basketball is how she built the character that she has.

It was an obvious basketball date.  The men on the date were:  Rodney, Nayte, Chris G., Pardeep, Oul, Joe.  They were joined by two WNBA athletes who were brought-in to help Michelle pick the guys for her team.  Michelle said in 2011, Joe was named Minnesota Mr. Basketball.  He was the number one player in the state. She was 2011 Minnesota Miss Basketball, runner-up.  While Joe and Michelle played together, Michelle liked that Joe was in his element and felt at home.  She said for a long time, her life was basketball.  The men were broken-up in teams of two. The losing Team goes home, and the winning Team spends more time with Michelle.

Although Joe was on the losing Team, he was awarded with the MVP award and was invited to the after party with the winning team.

During his alone time with Michelle, Joe opened-up to her about finding out his coach recently passed away.  He said being on the basketball court made him feel like his old self again.  Joe started losing his composure.  Then Michelle and Joe made-out.  In her  confessional,  Michelle said she’s never had chemistry with someone off the charts like that with Joe.

Back at the house: The losing team returned to the house.  The other guys questioned why Joe wasn’t with them.  Then they explained him getting the MVP metal.  The guys didn’t like that at all.

Back to the group date:  Michelle grabbed the date rose in front of the group of men and said “this person pushed themselves and challenged themselves to open-up.”  She gave the Group Date rose to Joe.  The other guys were not happy about that.  Especially since Joe had just gotten the MVP award as well.

Martin put two and two together – that both Michelle and Joe are from the same city and they both played basketball.

Michelle said “when you’re all in.  It can truly work”  She said it’s important to give that time because she is starting to fall in love.  During her alone time with Rodney, she gave him a blindfold taste test of multiple types of apples.  He still couldn’t guess the Granny Apple. 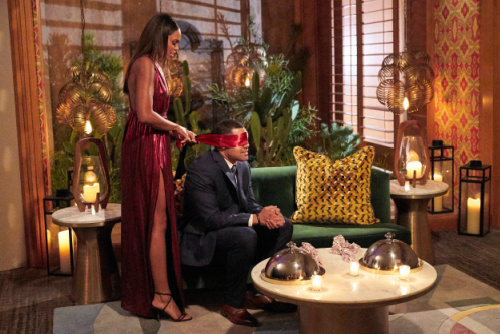 A group of four men were talking amongst themselves that they had an inkling that Joe and Michelle knew each other beforehand.  Most of the guys weren’t bothered by it.  But, Jamie was making a huge deal of it.  Jamie said before he arrived, he overheard from a friend that Michelle was already “booed up with a light skin baller” (that would be Joe).  Jamie decided to confront Michelle about it.  He said he was ony concerned now becasue he had made a connection with her on his date.

Jaime told Michelle that “there’s been a whole lot of talk” that she may have known Joe before coming onto the show.  He made it seem like he wasn’t bothered by it  but he was speaking on behalf of the other men who were bothered by it!  When actually he was the only one bothered by it.

Michelle was very blindsided.  She said that she wanted to put up every single wall and had to figure-out how to address it.  It made Michelle questioned if she made the right decision in going on the show.  Michelle took a time out to talk to Tayshia about it. Michelle was worried about her character being questioned.  “It’s almost comical.  There’s literally nothing.”  She said she knows that she wants to address it since Jamie said the whole house is questioning it.

Michelle went back to the group of guys to let them know that “that first night when you all walked in” that was the first night I met you all.  She said being in Minnesota every time she is seen with a man of color, it’s automatically assumed that they’re a couple.  And, it’s not the case. The guys looked super disinterested.  She opened-up the floor for questions.  But, they were all quiet.  So, Michelle went upstairs.  Rodney said he was lost because he never mentioned it.  The men were also blindsided and upset that someone told a story to Michelle that the whole house was talking about it.  Jamie kept quiet.

The hosts reached out to the men and told them that Michelle is “emotionally drained and decided to cancel the Cocktail Party.”

Brandon, Jamie, and Joe already had roses.  Michelle told the men that in accepting her rose, they have to also trust her.

Men who got roses: Nayte, Rodney, Martin, Rick, Leroy, Spencer, Casey, Chris G., Mollique, Olu, Chris S., Will, Romeo, LT, Clayton, Peter
Men who went home:  Pardeep, PJ, Alec, Daniel
Michelle told the men “let’s make this next week a lot better.”
NEXT WEEK:  There will be a Top Gun themed date.  It looks like the men will found out that Jamie was the guy that was creating drama and a lot of guys are upset.