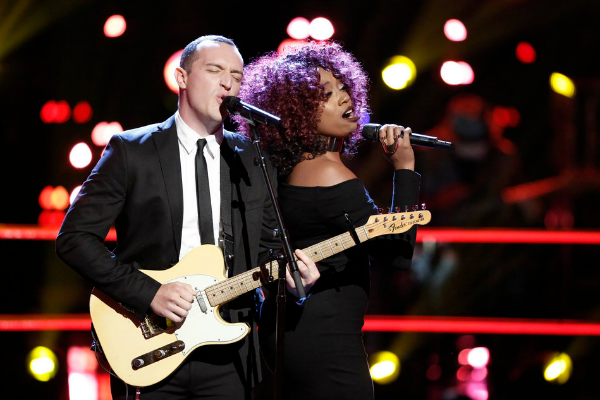 “The Voice” coaches Blake Shelton, Adam Levine, and newcomers this season Miley Cyrus and Alicia Keys continue their strategic pairing of contestants on their teams to go into Battle to decide who they’ll ultimately take to the live shows.

Each team is equipped with an additional layer of singer super-stardom by having advisers assist with their valuable feedback during rehearsals. Charlie Puth is the adviser on Team Alicia. Bette Midler is helping Team Blake. Joan Jett is with Team Miley, and Sammy Hagar is advising Team Adam. 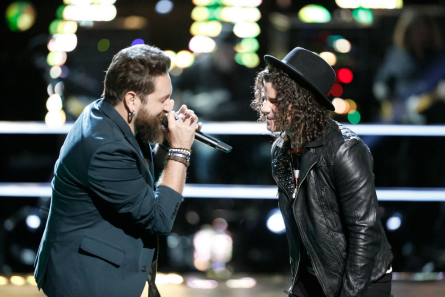 Blake reacted “that was a very evenly matched Battle.” He thought Nolan was going to kill it because he was a 4-chair-turn, which he did. But, he said, Johnny really stepped it up. He went with Johnny. Alicia said “nice work” and went with Nolan. Miley said the harmonies were “so tight.” She’s a fan of Nolan’s, but picked Johnny. Coach Adam said he was proud that they put in the work. He said he went with the person that he’s the most connected to which was Nolan.

Listen to Nolan’s INTERVIEW Below: 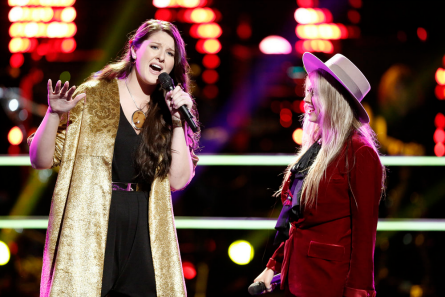 When asked why Miley paired Darby and Karlee together, she said, “I want this to be about you guys and I thought this song represents your voices well.” Miley said with them having similar tones, it will come down to in the Battle who’s unique. They sang “Brand New Key.”

Adam reacted to the Battle with “that was the Miliest thing ever in the best way. Darby was hard to look away from.” He also said Karlee, vocally was the most grounded. Blake said Darby was entertaining and infectious. Vocally Blake favored Karlee. Alicia said she was “very impressed.” Coach Miley had already decided and said she wants to continue to coach and work with Darby Walker.

Steal: Blake stole Karlee. Blake said he recognized some country in the song and wants to be part of her journey. He said she is “developing as an entertainer.”

Listen to Karlee’s INTERVIEW Below: 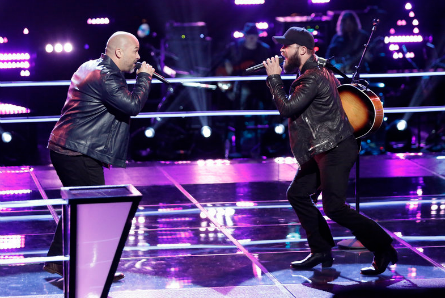 Blaine said it was “cool” that Bette Midler was his adviser, but also “intimidating.” Blake said Josh’s voice is definitely a voice he could hear on the radio. Unlike Josh, Blaine didn’t know this Country song “Stranger in My House” by Ronnie Milsap. Bette advised Josh to look at Blaine while singing and told Blaine NOT to wear his baggy pants on stage!

Alicia thought it was “great” and “Blaine’s voice really stood out.” She liked Josh’s showmanship. She picked Blaine. Miley deemed the Battle a tie. She said Blaine made her feel like she was at a concert. Miley picked Josh. Adam said Josh is like a contemporary Country singer. But, they were so close that he might go with Josh “because there’s more to be discovered.” Coach Blake thought Josh pushed himself “way more” than he expected. He said because Blaine doesn’t do covers, he’s selling himself short as to what he can do vocally.

Battle Winner: Josh Gallagher. Blake said he went with Josh because he pushed himself to the edge.

Dana Harper vs. Tarra Layne. Blake chose Dana; Alicia paired Belle Jewel vs Halle Tomlinson. Alicia picked Belle as the winner. On Team Adam was JSoul vs. Simone Gundy. Adam said he picked Simone because she had a “certain kind of magic” he couldn’t describe. 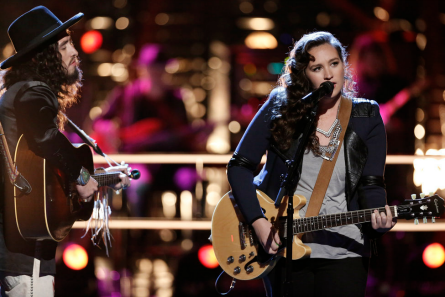 Adviser Charlie Puth remembered going to school at Berkeley with Kylie. Alicia paired Josh and Kylie together because they both play the guitar. She gave them “House of the Rising Sun” to sing each in their own way. During their rehearsal, Charlie called their voice “haunting” because Josh went low and Kylie went high. He said their voices are so different but “mesh well together.”

Miley said she can see why this is one of Alicia’s hardest decisions. It was like two separate performances. She said Josh’s voice is so unique and she’d go with him. Adam called it “a good pairing” and there’s no harder song to sing on Earth than that one. Blake wants to see Josh in a Western because of his hat and facial expressions. He picked Kylie. Coach Miley said when Josh sings, he’s no longer in this physical realm. She said he’s already a real spectacular artist. She noted that Kylie didn’t hold back.

Steal: Miley stole Josh. It was Miley’s last steal and said she wanted him because her team is about uniqueness and Josh is unique.

Listen to Josh’s INTERVIEW Below: 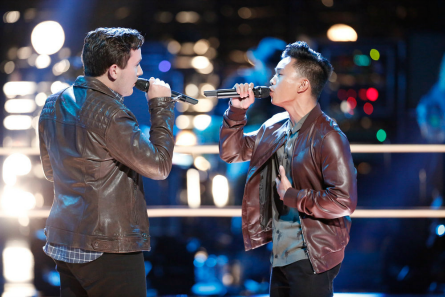 Gabe, at 15-years-old, is the youngest artist in the competition. He currently plays in a band. Blake called Christian and Gabe his two young-gun singers. Adviser Bette Midler called Christian’s voice “pitch perfect.” Blake gave them the song “The Reason” by Hoobastank. Blake said he can see that it’s harder for Gabe to get through the song.

Alicia said they were two different styled voices and said Christian sounded emotional. Miley told them that her dad wanted an ipod to hear this song. Miley said she still can’t believe that Gabe is fifteen. He has “a sturdy voice.” Adam agreed that Gabe’s voice is extremely mature. He picked Gabe. Coach Blake said Gabe’s performance seemed “real.” Christian hits big notes and plays with it. 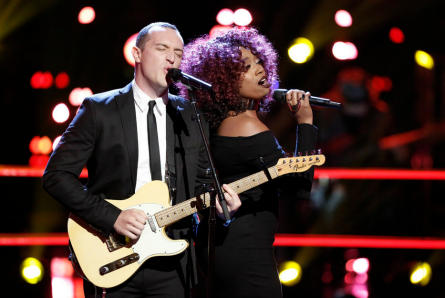 Miley suggested Aaron play his guitar during their Battle. Miley said she wanted to hear SaRayah’s life in her voice just like the original artist of the song “I’ll Take Care of You.” Advisers Joan Jett said “its’ about finding that space where it feels really genuine.”

Miley said they are the picture of her team and they represent it. She said Aaron is “like a new dude.” Adam said SaRayah brought what she did to the table without changing who she was. He called them both “spectacular.” Blake said SaRayah was born to sing that song and it seemed natural. Blake picked SaRayah. Alicia said she was excited that the world got to see what well-crafted artists sound like. Miley said it’s the hardest decision out of all her Battles. She said she feels like the person that needs her to spread their wings “a little bigger” is Aaron.

Steal: Both Blake and Alicia attempted to steal SaRayah as she was walking off the stage. Blake told her that she won that Battle and he loves her. Alicia said she just felt her, and she didn’t become “overbearing.” SaRayah chose Alicia as her new coach. 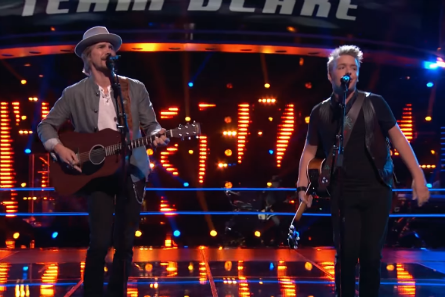 Alicia said they both had their own style. Austin has a strong sense of himself and Preston is “in his swag!” She picked Preston. Miley said Preston is younger, so that’s great. She said when it comes to Country fans, Austin has everything that they already want. But, ultimately, Miley couldn’t make-up her mind. Adam said he was surprised how great Austin was, and it’s enticing to see that type of greatness from a kid that young. Coach Blake said they were incredible. Preston, at only 16, is on the fast-track. Blake chose Austin. 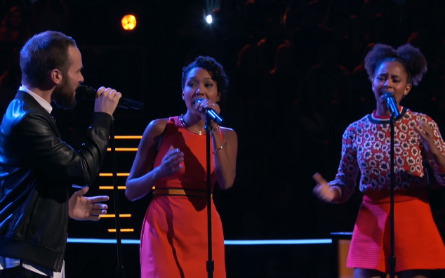 Miley said she’s never been speechless. “Wow” and the harmonies made the song really interesting. She thought Gabriel fit-in nicely and it helped that he had a Broadway background. Adam said it hurt not to get Whitney & Shannon on his team. They were just as strong as they were in the Blinds. He said Gabriel was fantastic. Blake reacted that he felt like Gabriel was not getting the credit that he deserved. He said there were so many interesting things about Gabriel’s voice. Coach Alicia said Gabriel “really, really arrived.” On Whitney & Shannon, she said she appreciates the way they’re able to show the world what music can look like and sound like…” 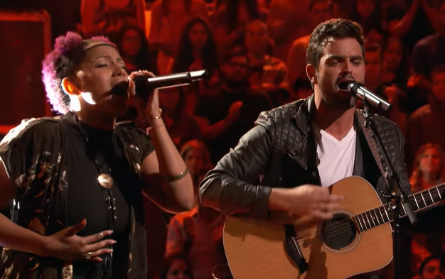 Blake said it was hard to figure out who out-sung the other. The key allowed Brendan to shine a little more. It was in the middle of Bindi’s range. Alicia said she was “really taken” by his voice and wanted to hear more from Bindi and more fire from her. Miley said it seemed too “comfortable and too easy” for Bindi on this song. Adam said Bindi does exist somewhere closer to the middle. Adam said she does remind him of Rihanna. Adam said there’s something “other worldly” about what Brendan does. “It’s thunderous”. Adam said he believes that Brendan’s potential is “limitless” and what he does astonishes to the point that makes the hair stand up on his arms.

Steal: Blake stole Bindi. Blake told Bindi “I don’t feel like we’ve heard what you’re capable of and I want to hear you some more.”

Listen to Bindi’s INTERVIEW Below: