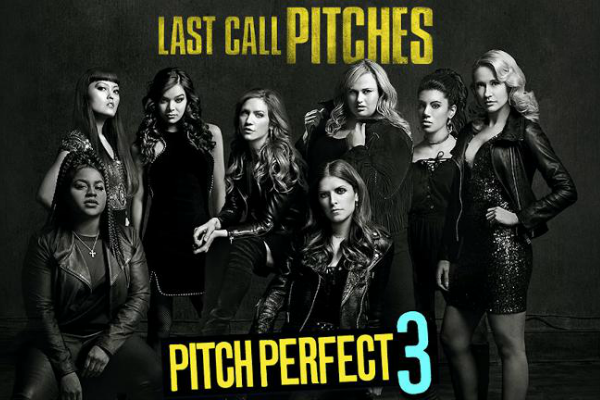 If you’re a fan of the ventures of the a cappella Barden Bella’s from past “Pitch Perfect” movies, I’m sorry to say that you’re in for a drawn-out, disappointing ride.

It’s been two years since audiences caught up with college born a cappella group the Barden Bellas. In it’s third and final(?) installment, the Bellas are “approaching their 30’s” which is all too evident upon them witnessing their shiny and bright, youthful replacements.

While caught-up in their average and miserable jobs, so it seems, the girls are “reunited” (not really since a good portion of them live together) at a current Bella Bardens performance via Pitch Perfect 2’s Hailee Steinfeld. When their so-called reunion heads South, the Bellas realize how much they miss singing together. Thus, former leader Aubrey (Anna Camp) gets the Bellas an opportunity to sing for the troops in the Army in a USO tour beginning in Spain and ending in France.

But, what are the Bellas if there’s no singing compeition to challenge them? Upon their arrival they instantly size-up the other entertainers around – “Saddle Up” and “Evermoist” to be exact, by challenging them to a riff-off. “A what” is the groups’ response. Soon after they learn of what is the actual competiton, music producer DJ Khaled who is judging the groups over the course of the three performances they’ll have to pull-off. Then he’ll select one winning group to open for him in a final performance as well as sign onto a record deal.

The Bellas once again prove that even in the most complicated oppositions, which in this case they must compete against real bands with instruments, and a pesky villain played by Ruby Rose, the front woman of “Evermoist” they hold their ground with an old-fashioned type of show. 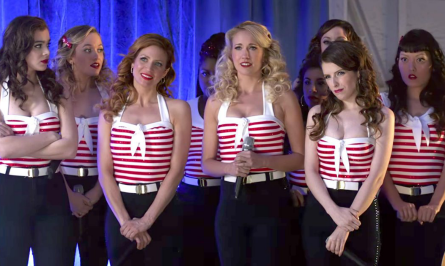 During their travels, Amy (Rebel Wilson) has her own reunion which is with her Dad, Fergus (portrayed by John Lithgow). This side plotline is a distraction which the film could have done without. The intent of Fergus took the fun and light-hearted comedy into a unwanted direction that is not common with the previous “Pitch Perfect” films. Actor John Lithgow’s Australian accent could have used much improvement. As a side note, in an interview, Rebel Wilson stated that Lithgow had only three days to learn the accent. If the film wasn’t a comedy his blatant fake accent would have been a true travesty.

In a moment of truth amongst the girls where the real challenge is their friendship and loyalty, they reveal their long-term career goals in which the Bellas are not part of (frown face). On a positive note, most of the Bellas find love while on their European tour.

If you haven’t seen previous “Pitch Perfect” films you’ll miss some of the jokes. Such as how easily Ashley and Jessica are forgettable.

There are more stunts added in this third installement than previous ones, which also makes it stray too far away from the previous two. Rejoining the cast are the ever entertaining sideline duo reporters (played by Eizabeth Banks and John Michael Higgins) who extend their coverage to follow the Bellas on-location throughout Spain and France to film a documentary of them.

Though the girls hate their current jobs, their long-term goals and aspirations are outside of the group. This brings-up the plotline involving Becca, (Anna Kendrick). whom I for one, would like to see a contuation spin-off movie showcasing her exciting ventures in the music world. Or, we could have a “Pitch Perfect 4” with the new Barden Bella’s headed by Hailee Steinfeld.

In the end product, several of the Bella’s find new loves and wrap it all up with some fun out-takes from all three movies. Awe!