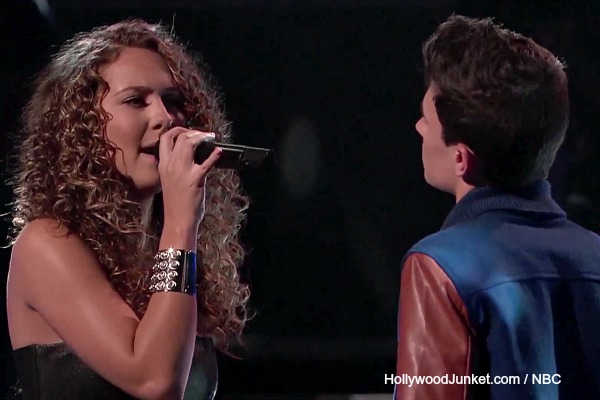 The second part of the premiere of “The Voice Battle Rounds” had the teams continuing in their sizing down of artists. Adam said the Battle Rounds is “about supporting these guys.” Gwen said about her team’s artists, “the best ones will rise to the top.” Blake is on top of his game, waiting to steal by stating, “I’m waiting for one of these coaches to make a mistake and let an artist slip through their hands.”

Team Pharrell advisers Alicia Keys, said she hopes that she can give the artists some tools. Pharrell said “it would be interesting acoustically to see these guys battle it out.” Alicia told Taylor to push his stomach out as if he has to take a poop. Alicia pushed them to reach for inspiration to sing the song from their experiences with heart-break. Taylor and Jordy still had trouble connecting with the song “Breakeven (Falling to Pieces)”.

Coaches Comments: “That was class!” Gwen responded to their battle, and she said she got lost (in a good way). Adam said if he had to decide, it is Taylor’s stage presence. Blake said it was a tough one. “There’s something about how Taylor attacks the vocal when he’s singing.” Coach Pharrell said “it’s super difficult for me” and that they took his advice.

Joe got all four coaches to turn their chairs in his Blind Audition. Alessandra and Joe were super happy to see their adviser Stevie Nicks. Adam chose the song “Stay” by Rihanna for their battle song. Adam said Alessandra is effortless and powerful in her voice, and Joe is charismatic. Nicks said Alessandra brought-up her intensity and Joe had to kick-up his game.

Coaches Comments: Blake said “damn Adam, that’s going to be a tough one” and told Alessandra he doesn’t know what she could have done better but called Joe’s vocals one of the most perfect vocals he’s ever heard. Pharrell told Joe he has a career for sure and found so much originality. He told Alessandra that her movement around the stage she was “just purring.” He also called her a “diva” because she was tapping the microphone to the beat of the song. Gwen said she was moved and had tears in her eyes because it was beautiful. She liked that they held-back enough and careful not to impress the coaches too much too quick. Coach Adam said Alessandra’s sings with ease and it’s surreal. He said they both “did too well” during this battle.

Another battle winner from Team Adam was Rebekah Samarin who went against Clara Hong.

Menlik left school to pursue a career in Reggae music. Troy is a child-care giver and a restaurant bus boy. Gwen’s husband Gavin Rossdale is their adviser. Gwen said Menlik and Troy are both equally talented and Troy’s Ska style and Menlik’s Reggae vibe mix well. Troy’s challenge was projecting his voice enough Gwen said or he will appear to be the weaker singer. Their song was “Maneater” by Hall & Oats.

Coaches Comments: Adam said “very hard to look cool,” while dancing to this particular song. “But you guys made it great,” and Menlik was “self-assured” and he can rise to a challenge Adam said. Blake said he loves that song and said it was the “best battle” of the day. Pharrell said he didn’t realize how good Troy was and it was a good performance. He told Menlik Ethiopia is proud of him. Coach Gwen said she wished that she could put them in a blender and make one person. She said she was surprised by Menlik because he let himself shine through during the battle. She picked Troy as the winner.

Steal: Adam and Pharrell pushed their buttons almost at the same time to steal Menlik. “You have a serious voice that deserves to be heard” Adam told Menlik. Pharrell said he’ll be happy either way he chooses, but would love to have him. Menlik chose Pharrell.