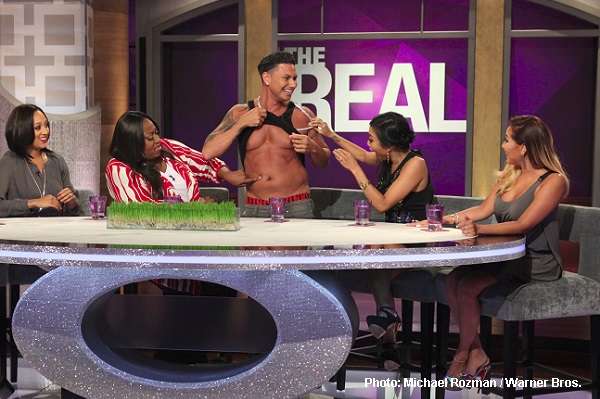 Hosts of the FOX daytime talk show “The Real” Adrienne Bailon, Jeannie Mai, Loni Love, Tamera Mowry-Housley, and Tamar Braxton open-up the forum on sex in public, the real details behind a popular break-up email sent to Rob Kardashian, and what single guy Pauly D. likes in a woman.

Adreinne comes clean with an email that she wrote to her famous ex-boy friend Rob Kardashian, brother of Kim Kardashian. The email was read out loud by Rob on his family’s hit reality television show “Keeping Up with the Kardashians”. She said he kept calling her after their break-up because he wanted to get back together with her. In order to make him stop, she formulated a letter with a friend to make it seem like it was written by the new man in her life. She said it worked. However, everyone thought that the letter came from a rumored fling with Fabulous, so it “got pinned” on him as the email writer especially when she ended the email with “One dog.”

When celebrity guest D.J. Pauly D. stops by from past MTV reality show “Jersey Shore,” Tamera gets accused of flirting with Pauly D. She tells him he “smells good”. Loni Love “says she never acts like that when other men come onto the show” and reminds Tamra that she’s married.

Pauly D. joked that the boyfriend requirements for Loni Love was having an XBox and all of his teeth. Tamar Braxton said it takes more for her and asked for his very expensive watch. She then placed it on her wrist. 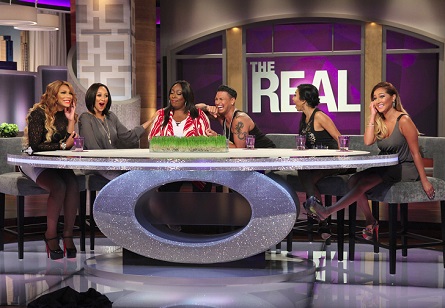 Pictured: Guest Pauly D with the women on THE REAL

In order to be “Mrs. Pauly D.” what does it take? Pauly D. who is now single, said what he looks for in a woman is “She has to make me smile. That’s the most important thing. I have a sense of humor. I want her to make me smile. She has to have a sense of humor too ‘cuz if not, you’d be bored. All day long with a girl who’s boring. She has to give me something to laugh and smile about.”

Rob said he’d choose Loni to “cuddle” with because she seems like she’d be a “freak” in bed and Adrienne for a wife.

In a another segment, the women talk about having sex in public. Adrienne said she has a thing for “open water and sex.” She said she’s had sex on a jet ski and a speed boat. Loni Love advised her “over-weight” sisters not to try that because she tired it an fell off into the water.

This episode of “The Real” airs Tuesday, July 30th on FOX affiliates.