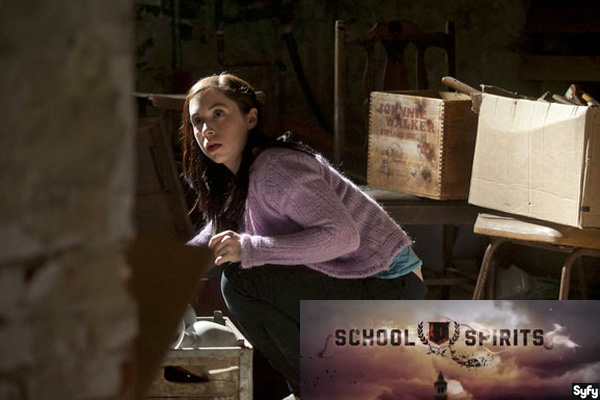 The stories unfolded in a visually creative way are those of students, alumni, faculty and historians who experienced them first-hand. It’s a six episode series. In the premiere episode, first-person experiences take viewers to a University of Michigan sorority house. HOLLYWOOD JUNKET talked to producers Seth and Julie Jarrett about the process of getting first-hand accounts and working with reality show producer Mark Burnett. Their audio interview an be heard in the video player below.

Seth stated that their company Jarrett Creative Group had wanted to partner with Mark Burnett in the past. When Burnett said he wanted to get into the re-enactment and paranormal genre, they developed this series together.

“We always seriously joke tha tthe best voices, the best people for this show are the people that don’t want to be found.” They use the “grass-roots” approach to finding the subjects for the show such as posting casting notices in local papers, alumni newsletters and school newspapers. “Up until celebrity ghost stories, I had absolutely no personal experiences. But, just had a complete fascination with the genre. Reading a lot about it and watching other shows…Most of the people on my staff from celebrity Ghost Stories staff including myself have at least once felt the presence of something. I felt fingers of a hand touch my shoulder once while we were shooting. Turned around and there was absolutely no one for twenty feet”.

Seth believes it’s the need to find answers and explore that keeps driving the audience to these types of shows. He also stated that he usually gets the best stories from people who actually don’t believe in the paranormal, but have had an experience that they can not explain. “These are the people that you genuinely want to watch and you’re interested in where this journey takes them,” said Seth.

“You go to college and it’s supposed to be the best time of your life. The last thing that you ever think will happen is going to happen is that you’re haunted. In some cases haunted by terrible, evil violent spirits. I love that balance. This is supposed to be that best time in your life, and it’s not”, explains Seth for the basis of the show.

Seth said that their oldest story is Genessio from 1984. He said that they are exploring a story that took place in the 1950’s or 1960s from a 90-year-old woman who was an R.A. in the dorm during the time that the spirit passed-away tragically. They are currently working-out the details to getting it on “School Spirits”. He said that they love to go back as far as they can for stories.

On the Burnett partnership – they took a lot of their stylistic experience from “Celebrity Ghost Stories” with Burnett’s story-telling experience. What viewers will get will be a “melting of the two brands”. Julie assures that there is a “bigness” about the show similar to Burnett’s style as well as higher production quality. “It feels like you get lost in a film … in a great thriller or a great horror film. He constantly pushed us towards that”, said Seth.