Every spotlight moment was hers whether or not it was given to her, she made it hers. John said it's hard for Ryan to compete with that. At this moment...MORE

Hollywood Junket get a sneak-peek to “The Voice” season 19 Battles where we got to view the first day of Battles via an online stream. What we saw was a news stage, and a new way for ‘Voice artist to Battle!

Due to social distancing orders, artists will Battle each other from separate, hexagon shaped stages, still set in a boxing ring-like setting. Previous seasons of “The Voice”, artists Battles each other on one stage, singing within the same ring setting. In addition to that obvious change, the not obvious change to viewers at home is that the stage itself was also new to the coaches and staff. Their new stage is near the same one where the revamped “Saved By the Bell” was filmed.

With the separate double stage set-up, it had the coaches looking back and forth, side-to-side in the same way tennis matches are watched, one coach noted. Needless to say, they found it a little annoying.

“The Voice” coaches – Blake Shelton, Kelly Clarkson, Gwen Stefani, and John Legend will still be equipped with their Steal and Saves in this round. Advisers for each Team were on hand to mentor their artists through this Battle round. Team Blake had help from Kane Brown, Team Gwen utilized the expertise of Julia Michaels, John Legend’s artists got advice from Miguel, and Team Kelly had help from Leon Bridges.

And who would want to “boo” these artists right? First-up of the day was Team Legend’s only Country artist Bailey Rae up against Sid Kingsley.

Bailey is 18 years old from Oklahoma.  They sang “Tennessee Whiskey.”  Coaches Reactions: Gwen said It was such a great Battle.  She felt like Bailey was like the underdog.   Bailey has so much range.  Bailey started timid.  But, her tone is so unexpected.  “I promise you (to Legend) I don’t know who to choose.”  She said she loves Bailey’s voice a lot,  Kelly said it’s a Chris Stapelton song.  She loves the bigger, raspier voice.  It takes so much power.  She said Sid’s entrance was so strong.  Kelly said she loves Bailey’s tone.  But, the song lent itself to Sid more.

Blake said there’s something so refreshing about Bailey’s tone.  It’s “very powerful,”  but has a beautiful, clean tone.  At the beginning, her voice wasn’t there.  Sid on the other hand, there’s no denying his entrance into the room.  He voted for Sid.  Legend said both gave fantastic performances.  Both ring many things to the competition.  Their tones, styles are very different.  Legend said the song has been stuck in his head and was deciding about it.  “You both stepped-u[ to the plate.”  He thought Bailey nailed every aspect of the song.  He called Sid a gifted vocalist, and loved his attack of the song.

Desz is 30-years-old from Houston.  Joseph is 40-years-old from Hawaii.  They sang the song “If You Don’t Know Me By Now.”  Coaches reactions: Blake reacted, “I feel like I know both of you now!”  He said Joseph’s voice is “shaky.”  There were neat runs, pitch is great and getting lost in the moment.   He also stated that they were “connected” as much as can be, being that they were on separate islands.  The power of Deszs’ voice fills the room.  He voted for Desz.    John Legend said he really wanted Desz on his Team and hasn’t changed his mind.  He said she showed them how gifted of a vocalist she is.  “A real force to be reckoned with on the show.”  He called Joseph’s voice “soulful” and he has good control.

Gwen said Desz has everything going for her.  She said when she walked out, she knew she was going to slay.  Joseph’s voice is “so beautiful,” and “you don’t expect it.”  She voted for Desz based on presence.  Kelly said Joseph is like an angel that sings R&B.  His falsetto is so beautiful.  She told Desz she’s a “powerful presence.”  It’s hard not to keep watching her.  Kelly begged the coaches to help her with this decision backstage.  She said nerves affected one of them.

Taryn is from Nashville, and “Worth the Wait” is a mother and daughters trio.  Coaches reactions: John Legend said it’s like a tennis match (because of separate stages).  He said they were both doing so many interesting things.  A lot of great singing and energy.  He said it’s infectious.  Taryn held her own as a solo artist.  Hearing some of the lower stuff in her range was the best part.  He could see that Worth the Wait loves singing together and “it’s heart-warming.”  Gwen said it was fun to watch and Taryn has so much stage presence this early in the show.  She could see Taryn will be able to stand up to other singers.

Kelly loved Taryn’s sexy, raspy voice and would have liked to hear a second soprano in her.  Kelly said “Worth the Wait” sounds like “one human.”  It’s a crazy good family.  She said JC and Mama T have innate confidence.  She noted that something is holding Mia back.  Blake thinks of it as the most important Battle of season 19.  He said “Worth the Wait” is unique.  Taryn has the unique situation to be the only one singing with a trio.  Taryn reminded him of Cassadee Pope (season 3 winner).  He added that Mia reminded him of Danielle Bradbery (season 4 winner) .  Blake said, so talented but not a lot of stage presence.  The trio told the coaches that Mia was picked to be the lead vocalist of their group.

Lauren is 16-years-old.  Payge is 27-years-old.  They sang “If the World was Ending” by JP Saxe, Ft Julia Michaels.   Kelly said it was “so intense.”  She couldn’t NOT keep her eyes off Payge.  That’s the best kind of singer.  Both did a great job tapping into Julia Michaels who wrote the song.  The seattleites in Payge’s voice is “really rad.”  Kelly said Lauren has a pretty, angelic voice.  She noted that Lauren was a little pitchier at moments, and Payge was captivating.  Blake reacted to the Battle,  he said Lauren is unique.  He said he feels like Payge is on his Team and went with her.  “It’s a hard song to sing.  He said no way he’d be able to perform that song.  Blake said there’s something about Lauren and extra points Gwen must be thinking about all the songs you could work one.  He thinks Payge will do well on the show.

John said both sang with passion and had individuality.  They did an excellent job of communicating what the song writer intended.  Payge’s voice has richness, character and range.  “I felt like you are so connected to the music and art.”  He thought Lauren is an old soul and who is connected to different eras of music.  Both are “true artists,” John said.  After John couldn’t decide who he’d vote for.  Gwen called him out, commented “they (producers) said we have to tell (who they’d pick).”  John didn’t pick.

Gwen said this Battle was her hardest one out of her Team.  Lauren blows her away more because of her age and background.  She called Lauren “fascinating” because she’s so unique and shocked Gwen in her rehearsals.  Payge knows what she wants to say and knows who she wants to be.  Gwen is excited to see what musical direction she would go.  Gwen chose the artists whom she thought she could show more with.

After that, John and Blake both pushed to STEAL Gwen’s losing artist. 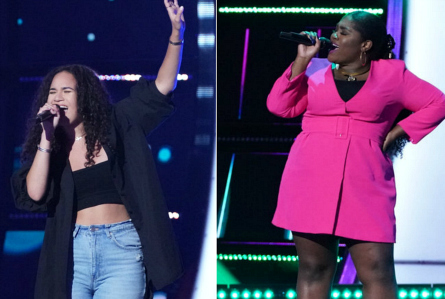 Olivia is 19-years-old from New Jersey.  Tamara is 30-years-old.  Gwen stated that Olivia’s voice is “unexpected.”   Tamara is open and her vocal is “fire and something really intriguing.”   Kelly said it’s easier to take control of their stage.  Kelly said Olivia reminds her of Jessie J.  who’s song it was that they sang.  Kelly turned for Tamara in the Blinds. She said she loves both of them and they’re completely different.  Though, Kelly thought that Tamara had a little bit more of a leg up.  Blake said because he doesn’t know the song, it was hard to know if there was any pitchiness.  Blake called it an equal Battle.  But, based on her charisma, he chose Tamara.

John said both were fantastic.  Olivia has such a connection.  Tamara has so much depth and bravado.  He also said they both had effective ways of presenting a song, just differently.  John also said he would choose the artist with the most individuality and fire.

They sang a big song by Celine Dion.  Blake said he felt like Marisa was blowing the room up and he was “towing the line.”  Every spotlight moment was hers whether or not it was given to her, she made it hers.  John said it’s hard for Ryan to compete with that.  At this moment it was given to Marisa to shine. Gwen said they are almost opposite the way they attacked the song.  He’s at ease the entire time as he sings perfect notes without even trying.  Marisa is this little thing with huge passion.  It’s hard to compare them because they are so different.  Gwen picked Marisa.  Their coach Kelly said she disagreed that they were unevenly matched.  Kelly called it her hardest Battle.  Marisa and Ryan are both classically trained.  Kelly said she felt like the dumbest person pairing them.  She took a long time to decide the winner of the Battle.

On a side note – Kelly learned that Ryan was at a disadvantage because Marisa had sung that song a thousand times before.

John said the most impressive part of Aaron was hearing his range.  It was really passionate and brought a lot of energy to the stage. However, he missed-out on bringing his own style and identity where Ian had a lot of identity and character.  “That was more compelling to me,” said John.  Gwen said it felt really balanced.  Aaron’s voice is so powerful and clean compared to Ian’s voice.  With Ian, you can tell it’s him because no one has a voice like him.  Gwen continued, she can’t wait to hear what else his voice can do.  It’s more about stage presence to choose.  Ian was more comfortable.  Gwen picked Ian.

Kelly said she didn’t know if that song would have been Aaron’s first pick.  She liked him better in the Blinds with the 90s Rock.  She was glued to Ian who is one of her favorite vocalists this season.   Blake felt like every single note in the rehearsal came into play.  He said when he could get a word out of Kane Brown the only notes they’re learning are taste-driven and not technical.