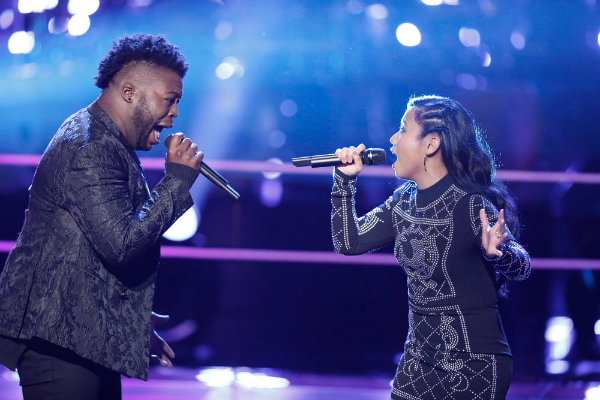 It was the first night of “The Voice” Battle Rounds where each coach introduces a Team adviser to help mentor their artists. The coaches welcomed the best mentors to help prep their artists for the Battle Rounds. Team Blake brought in Rascal Flatts. Adam Levine got the help of Joe Jonas; Team J Hud was joined by Kelly Rowland. Jennifer said Kelly and her are “great friends. Team Miley proved that the apple doesn’t fall far from the tree by bringing in her dad, Country legend Billy Ray Cyrus.

During the Battle Rounds, the coaches have the option to steal artists from other coaches to place on their own teams. As the night went on, the Steals slowly came in and by the second half of Monday’s show there were some very worthy steals! 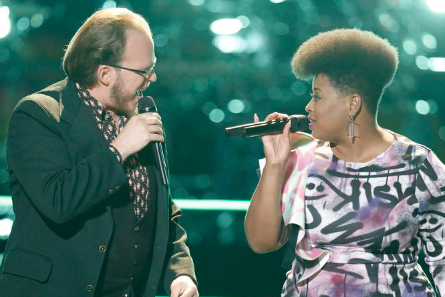 Miley reacted to their Battle with “Meagan, you owned it and had everyone on their feet…it was a crowd pleaser.” Miley added that she knew Lucas was an entertainer and it was a “gift” to watch them perform. Adam asked “what the hell was that?” The happiness is infectious. He said he’s a fan of Lucas and didn’t know how awesome Meagan is. Coach Jennifer said she was so proud of both of them, and appreciates that they are true to who they are. 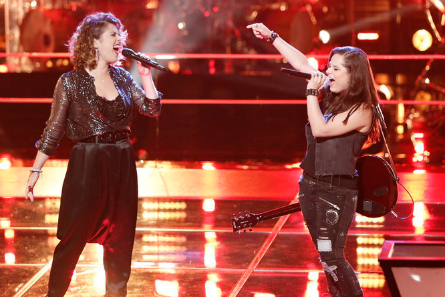 Miley gave her two rocker girls – Shilo and Moriah “American WOman” song to sing. She paired them up because they both have “gravely” voices. After their Battle, Adam said he perferred Moriah. Blake said it was a great performance and they brought rock elements that he appreciated. On Moriah, he said “you’re a born rock star.” Jennifer said Shilo did a great job of owning it and making it her own, and Moriah is like a 35-year-old soul. She chose her as the winner. Coach Miley said “this one is, I feel like I’m going to pass out.” She said Shilo has grown the most and embodies a rocker chick. But, Moriah is like “a rock goddess” and she gets nervous being around her.

KEISHA RENEE vs. NOAH MAC – TEAM BLAKE
Rascall Flatts are Blake Shelton’s advisers. Blake said one of his biggest breaks was being the opening act for Rascal Flatts. Keisha got a 4-chair-turn during her Blind Audition. Noah spends most of his time doing music he said and not school activities. Blake said Keisha and Noah are the most powerful singers on his team that can sing all genres. He gave them classic Country song “I’m So Lonesome I Could Cry” by Hank Williams.

Jennifer said Keisha is true to the context of a Country song and she couldn’t pick. Miley told Kiesha that she never felt “over-powering” and they both made it feel like it was the 50’s or 60’s era (the song was recorded in 1949). Adam said Kiesha was bringing him to church and Noah was brining him to a 50’s diner. Not one is better than the other, he noted, and called them both “amazing.” Coach Blake said it’s always easy when someone is really good and when “someone sucks.” But, this wasn’t the case. He said Kiesha could “fly” with her voice.

BATTLE WINNER: Keisha. Blake said Kiesha’s vocals are “out of this world.”
STEAL: Jennifer stole Noah. Jennifer said it was the care and the passion that Noah had which is why she stole him.

CHRIS WEAVER vs. KATHRINA FEIGH – TEAM J HUD
Kathrina said her and Chris are two big voices that could clash. Jennifer said Chris is starting to come into his own. She said they are both “so good” and doesn’t know who she’ll pick. They sang “Dangerous Woman” by Ariana Grande.

Miley called it almost an a cappella performance. She said they set the standard for Battles so high. Adam was impressed with Kathrina’s power and to go up against Chris is “terrifying”. But, she didn’t let him over-power her. Blake said they’re both incredible singers with such good control. Coach Jennifer said Kathrina held her own. Then there’s Chris, his type of voice is a “freight train”.. But, Kathrina came out with her own freight train as well. 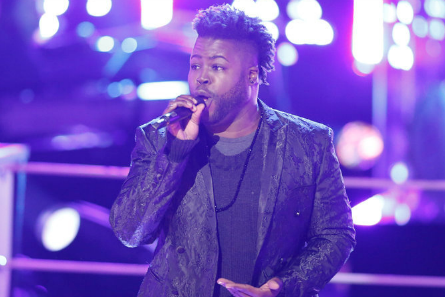 BATTLE WINNER: Chris. Jennifer said Chris has the talent to make it to the end.
STEAL: Blake stole Kathrina. Blake said at “B Shel productions, we try not to let great talent get away!”

BROOKE SIMPSON vs SOPHIA BOLLMAN – TEAM MILEY
Brooke and Sophia were both excited to see Billy Ray Cyrus as their adviser. Miley had them sing a Bob Dylan song because it’s out of the box and creative. Brooke said Miley is pushing her to explore parts of her voice that she’s never done before. They sang “You’re a Big Girl Now.”

Adam said Brooke has all the power as Sophia. Jennifer said she didn’t realize that Sophia has such a big range and voice. She added that Brooke held true to what they expected from her and Sophia stepped it up. Coach Miley said they made a Bob Dylan song their own. She called Brooke a “super star.” She said she is both of their coach no matter what. 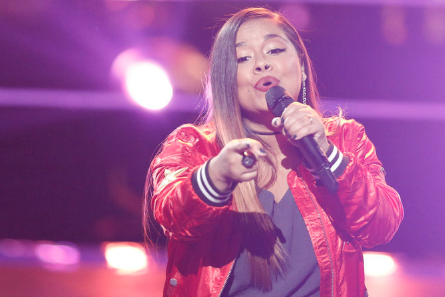 BATTLE WINNER: Brooke. Miley said she loves Brooke’s voice and the power behind it and wants to keep doing “the unexpected from her.”

ADAM PEARCE vs. WHITNEY FENIMORE – TEAM ADAM
Whitney said she’s a legitmate fan of Joe Jonas, who was their adviser. Adam Pearce said he had previoulsy auditioned for “The Voice” and worked really hard before coming back this season. Adam Levine gave them “Stop Dragging My Heart Around” song by Stevie Nicks and Tom Petty. Joe said he couldn’t pick a favorite out of Adam and Whitney and nobody is in the lead. Joe avised them to “show it’ how heartbreaking the song is.

Blake chose Whitney as his perfrence. Jennifer said Adam has that “rocky edge” and went with him. Miley said she loves watching Adam play his guitar but misses his stage presence. She went with Adam as well. Coach Adam said Whitney really surprised him and he’s fallen in love with both of them and they’re 100 percent equal.

BATTLE WINNER: Adam. Levine said Adam is too special to let go.
STEAL: Blake and Miley pushed their buttons to steal Whitney. Blake said there’s something truely special about Whitney and the “oakies” should stay together. Whitney chose Miley.

DEVON FLEMING vs. MAHARASYI – TEAM J HUD
Jennifer gave them the song “I’m Your Baby Tonight” by Whitney Houston.
Miley said it’s not about who’s better than the other. But what Jennifer sees and who fits that pocket best. Adam said he sided with Devon “because he’s a force of nature.” However, Maharasyi has an incredible voice. Blake said in that Battle, they were equally incredible. The coach brought something out on the stage is a credit to J Hud and to Maharasyi. Coach Jennifer said she is extremely proud of Maharasyi, and Devon’s love for Whitney Huston shines through. 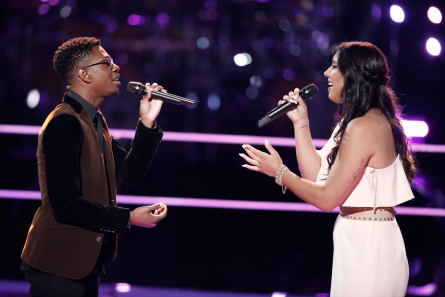 In the Blind Auditions, Adam called Hannah a “Kelly Clarkson type”. Before coming onto “The Voice”, Brandon was an English teacher whose students didn’t know he was going onto “The Voice.” He recently got married. Adam gave them “Cold Water” song. Adam liked the version of the song that Brandon and Hannah created. Hannah connected to the song due to her brother’s suicide because the song talks about a dark place.

Blake called Hannah’s voice “unbelievable” and went with her. Jennifer said they were a good pairing. But, if she had to choose, she’d go with Brandon. Miley said she pushed for Brandon in the Blinds, and not for Hannah. Miley now sees Hannah’s potential. Coach Adam said he’s heard something special from Hannah since the begining and has grown to love Brandon.

Blake has one Steal left and is being “extremely picky” he said. 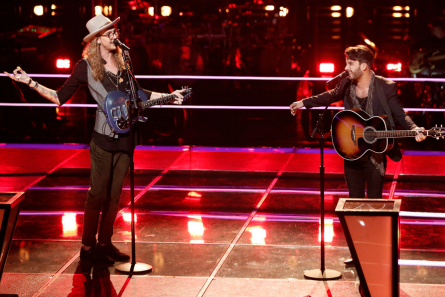 Before “The Voice” Mitchell said he was originally going to go to Military college. Then he got a call that his mom passed away. Blake had Dennis and Mitchell battle each other because they’re both “East Nashville type artists”. Blake gave them the song “Mr. Jones” by Counting Crows. During rehersals, Blake said Dennis’ diction is so good. But, Mitchell is harder to understand. Blake advised Dennis that he needs to also come out on stage as “the lead man” or front man like Mitchell. Dennis admitted that is an “uncharted territory” for him.

Jennifer called them captivating and wants to go to each of their concerts. She called them “Stars.” But, she went with Mitchell. Miley said Mitchell was “pitch perfect.” It was more than just the vocals for Dennis, she said he has “such a vibe”. Adam commented that Mitchell sounds like Adam Durst. He said Mitchell is more in Blake’s wheelhouse. Coach Blake ultimately agreed with Adam He called this Battle his closest one this season.

BATTLE WINNER: Mitchell. Blake said he had to go with who he felt was more in his wheelhouse.
STEAL – Dennis was stolen by Adam. Adam said he fought really hard for him in the Blinds, and it’s good to get him back. “Adam’s going to bring out a nice Rock side in me”, said Dennis.