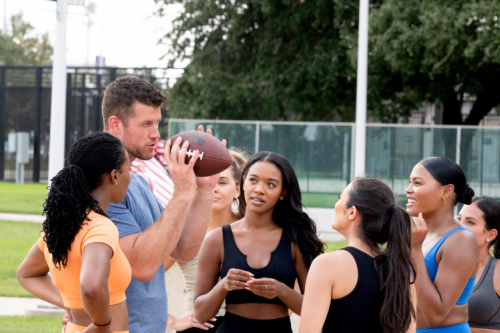 “The Bachelor” episode four picked-up this week where it left off last week where the drama continued between Elizabeth and Shanae.  The ladies continued to disagree over weather or not Elizabeth was being a “mean girl” to Shanae.  Clayton wanted to get to the bottom of the situation, which he had promised to do during the Cocktail Party.

The remaining women waited for Clayton’s arrival at the Cocktail Party who said in last week’s episode that he wanted to address the drama in the house.

After Clayton arrived, he told the women that there were “a lot of disturbing things” that happened and before he could move-on with the Cocktail Party he needed to address it.  Then, he called Shanae and Elizabeth to talk to them outside.

Shanae told Elizabeth that she’s been bullying her, then brought-up the shrimp debacle.  Shanae went on to tell Elizabeth that all the girls ignore her when she’s around and wanted Clayton to know that Elizabeth is a liar.   After Clayton stepped-away from the arguing between Shanae and Elizabeth,  the two headed back inside with the rest of the group of women.  Shanae proceeded to rejoin the women carrying a plate of shrimp.  This set the women off, and an argument ensued amongst all the women.

Then host Jesse Palmer interrupted the women and said Clayton was looking forward to spending the night with them.  However, he decided to cancel the Cocktail Party and move into the Rose Ceremony.

Clayton said “tonight was very frustrating” and felt that he mentally couldn’t continue on with the night.  “It was a decision I felt was the right one.”

Shanae celebrated her victory in getting Elizabeth sent home.

The women couldn’t believe that Clayton sent Elizabeth home and kept Shanae.  Gabby said Shanae is someone she has to worry about because no one trusts her and no one wants to speak to her in the house.  Shanae told the women that she feels like a weight has been lifted off of her and she can talk freely without feeling scared.  The women had all kinds of faces for their reactions to Shanae stating that.

Jesse arrived to tell the women that there would be no date that night… “here in Los Angeles.”  They were saying goodbye to the mansion and setting off to a worldwide adventure. Their first stop w as Houston, Texas.

Clayton was welcomed to Houston with an old teammate, a football player.  Clayton said Houston feels like home, and told his friend that he thinks he’ll be ready to get down on one knee at the end.  He doesn’t know how he’ll choose one at the end.  His friend advised him that the one that he picks, is a rock and is the one for him.  Clayton said this week “is going to be even more monumental.”

Back to the women:  They received the first date card which read:  “Rachel, let’s find our love in the heart of Texas.”  Rachel was excited to be the first one picked to go on a date with Clayton in Houston.  Mara was upset that she wasn’t on the date.  Lyndsey and Teddi were also upset.  They all wanted that connection.

Clayton said when he’s with Rachel, everything else vanishes.  He said he likes Rachel  because she’s a pilot, she’s smart, and humble.  At the start of their date, the two got onto horses and eventually rode to where a family was having a bar-be-cue that they decided to join.  This was an opportunity for them to talk about their feelings for each other and how their date was going so far to complete strangers.  After that, Rachel and Clayton had some private time where they talked about wanting to build their relationship, then kissed.   Rachel said her feelings for Clayton have skyrocketed and “it just hasn’t stopped.”

Back at the hotel:  The next group date card arrived which read: “Sarah, Eliza, Teddi, Marlena, Jill, Susie, Mara, Sierra, Hunter, Lyndsey, Genevieve, Gabby, Shanae.  Meet me at the stadium.  Love Clayton.”  All the women were expecting there to be drama because of Shanae.  Serene was not on the card which meant she was getting the second one-on-one date.

Back to Rachel and Clayton:  Clayton told Rachel that the more he talks to her, the more confused and questions he has.  “I’m wondering how a woman as beautiful as you with a bad ass job…I’m wondering why you’re here.”  Clayton said “it’s a genuine question.”  She reacted that, that was something that she thought a lot about that day.  Rachel said she knew as a kid she wanted to be a pilot and as a woman, she had to work harder and every single day.   Her last relationship was not supportive of her career.    Rachel said she never wants to experience that kind of “conditional” love again.   She wants to be a mom and be married while doing what she’s worked so hard for.

Clayton said seeing her be so passionate about her job is very attractive to him and he would never hold her back from doing something that she loves.  Rachel got emotional and said he just spoke everything that she needed to hear.  It made her “so happy.”  In her confessional, she said Clayton stepped the bar up, and “it’s a whole new level in their relationship.”   Next, Clayton took Rachel to be serenaded by Country band “Restless Road.”

Clayton said the date couldn’t have been more perfect and gave Rachel the date rose.  He said she’s somebody that he could see a future with.  “I see us having a family.  And I can see myself growing old with Rachel.”   Rachel loved that Clayton told her “I will never dim your light.”  She hoped that the feelings were the same for him.

Back to the women:  The women hated that Shanae never apologized to them over ruining the Cocktail Party.  They didn’t want Shanae on their group date because “she’s toxic.”  Sierra said Clayton needs to know who Shane is.  Gabby and Genevieve agreed with her.  In the meantime, Shanae could hear everything that the women were saying about her.  She was pissed that they were plotting against her in an attempt to get her sent home.

Clayton said football was a big part of his life and was happy to get to share that with the women.   The women arrived at a tailgate party that included food and games.  Then two football friends of Clayton’s showed-up who were Jonathan and Kamu.  They’re two Houston, Texas football players.  They announced that they would be playing tackle football. The winners got to go to the After Party.  The losers would go back to the hotel.

The women were split into two teams:  “Shrimp Stampede” (blue Team) which had Shana on it, and “Purple Punishers” with Olympian Marlene on it.   Shanae had her sights set on Genevieve, and Sierra for talking about her earlier that day.  She said she planned to tackle them.

Hannah Storm, and Jesse Palmer were on hand to be commentators for “The Bachelor Bowl” competition.   Jesse observed “there is bad blood out here” when he saw Shanae flattened Sierra.   Then Marlena tackled Shanae.   With two touch-downs, the Purple Punishers won the After Party time with Clayton.   Shanae was worried that they would pull Clayton aside to tell him about her character. 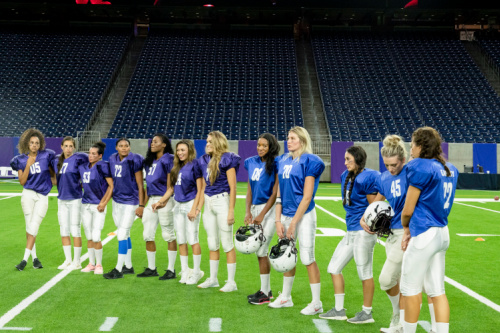 Teddi was having a hard time with feeling like she had to gain Clayton’s love.   She related it to her father, who separated from her mother.  “I’ve always been like gain that love from him.”  She said she’s trying not to let her childhood affect her time there with Clayton.  He explained that Teddi being her is what he likes and told her to just keep being her.  Teddi said “it’s hard to share family stuff” and thinks that after she shared, that he trusts her more.

The girls at the After Party included Sierra, Genevieve, Sarah, Mara.  Sierra was getting ready to tell Clayton about Shanae.

Back at the hotel:  Shanae was worried what Genevieve and Sierra might be saying about her in the After Party.  Shanae had a plan to stand up for herself.

Back to the After Party:  Sierra told Clayton that when he decided to keep Shanae, a lot of women in the house were shocked.  She told him that if he had the full story, he wouldn’t want someone like that as his wife.   Clayton told Sierra that he appreciated her telling him about Shanae.  He said he thought they were all past the drama.   Then, Genevieve told Clayton about Shanae.  In the meantime, Shanae was getting ready to crash their After Party.

Shanae walked into the After Party during a conversation that Clayton was having with Sarah.  He was shocked and asked her if she was on the losing Team.  Shanae lied and said “no.”  Then said she deserved to be there.  Clayton left to talk to her alone.   He told her he had some things brought to his attention and “I don’t know why this is still a thing.”  Shanae told Clayton how Gabby, Genevieve, and Sierra were talking about her, plotting to get her sent home earlier that day.

Shanae asked Clayton what they said about her.  Clayton had no answer.  Then they proceeded to make out… making their way to the bar.  After that, Shanae went outside to yell at Genevieve and Sierra and told them to keep her name out of their mouths while picking up their trophy and threw it in the bushes.  She stormed off after that.

It was a “to be continued.”  And, we didn’t get to Serene’s one-on-one date with Clayton in this episode.

NEXT WEEK:  One-on-One dates will occur with Sarah, Gabby, and we’ll see Serene’s one-on-one date that was preempted due to all the drama.